Hamas makes demands of Israel to prevent escalation in Gaza

Hamas has made four demands of Israel in an effort to contain the violence at Al-Aqsa Mosque and in the West Bank. 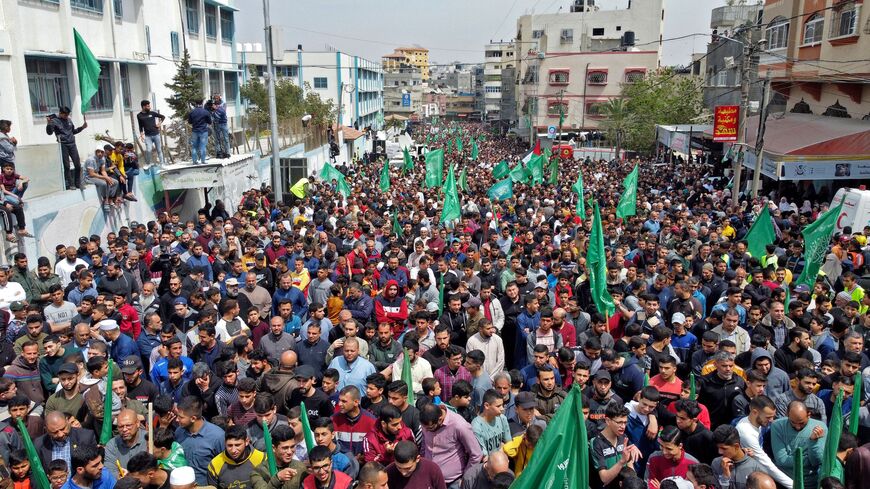 This aerial view shows supporters of the Palestinian Hamas movement rallying after Friday prayers in Jabalia in the northern Gaza Strip to show solidarity with Palestinians confronting Israeli forces at the Al-Aqsa Mosque compound in Jerusalem, on April 22, 2022. - MOHAMMED ABED/AFP via Getty Images

Hamas’ political chief Ismail Haniyeh said in an April 15 press statement that the resistance group would retaliate should Israeli settlers’ attacks continue in Al-Aqsa Mosque, saying it would “defend Al-Aqsa at all costs” and outlined four demands for Israel:

Egyptian intelligence officials and UN Special Coordinator for the Middle East Peace Process Tor Wennesland have intensified contacts with both sides in a bid to prevent escalation in Gaza over the Al-Aqsa events. Hamas also stated in a press release that Haniyeh had received a call from Wennesland, “who called on all concerned parties to work to contain the situation.”

But despite the Egyptian and UN-led mediation efforts to avoid an escalation from the Gaza Strip, a rocket was fired from the enclave toward Israel on April 19. No faction claimed responsibility. In response, the Israeli military launched airstrikes inside Gaza for the first time since last year’s conflict and Al-Qassam Brigades, Hamas’ military wing, reacted by firing surface-to-air rockets at the Israeli jets.

On April 21, a series of rockets were launched from Gaza toward southern Israel, with no claim of responsibility from any faction. Subsequently, Israel hit resistance positions inside the enclave, with Hamas responding by firing a surface-to-air rocket.

In an April 21 press statement, Izzat al-Rishq, a member of Hamas’ political bureau, said Israel’s strikes were “an attempt by the occupation to cover for its failure.”

Rishq said “the Palestinian people and the resistance” had forced the Israeli authorities to stop a far-right march by settlers toward Damascus Gate in Jerusalem, as well halting plans for animal sacrifices at Al-Aqsa.

On April 19, the far-right Jewish group "Chozrim Lahar " (Return to the Temple Mount) was stopped by Israeli police from sacrificing a goat inside Al-Aqsa Mosque.

On April 20, the Israeli press reported that the political leadership has decided to close the courtyards of Al-Aqsa Mosque to Jewish settlers from April 22 until the end of Ramadan, in an effort to defuse tension. The same day, the Israeli police prevented Jewish extremists including Knesset member Itamar Ben-Gvir from reaching the Damascus Gate area in east Jerusalem for their planned "Flag March," following threats from Hamas and other Palestinian factions.

Haniyeh said in an April 21 press statement, “Just like we defeated the Flag March, we will defeat the policy of raids into Al-Aqsa Mosque. We are still at the beginning of the battle against the Israeli occupation.” In another statement, Hamas called on the Palestinian people to head en masse to Al-Aqsa Mosque the next day to perform the fajr (dawn) prayer and defend the holy site against Israeli violations.

On April 22, fresh clashes erupted between Muslim worshipers and Israeli police at the mosque, leaving at least 31 Palestinians injured.

On April 21, Al-Araby al-Jadeed quoted anonymous Egyptian sources knowledgable of Cairo’s mediation between Israel and the Palestinians as saying that Cairo asked Hamas not to take advantage of the current situation — in reference to the weakness of the Israeli governing coalition — and avoid launching rockets from Gaza toward Israel.

Egypt, the sources added, believes that rocket strikes as Israeli Prime Minister Naftali Bennett’s government is grappling with internal crises will lead to the government’s collapse and the advent of a more far-right one, which will be worse for Palestinians.

Israeli Defense Minister Benny Gantz said during a meeting with city leaders in the Gaza envelope, “We are ready for any scenario, and we will respond with force if need be. We have plans for Gaza if we are forced to take action.”

Hamas spokesperson in Lebanon Jihad Taha told Al-Monitor, “Defending Al-Aqsa Mosque is a priority for Hamas.” He added that Palestinians have the right to resist Israeli aggression “by all available means.”

Taha called on the international community to take bold action to stop the killing of Palestinians and depriving Palestinian prisoners of their basic rights.

“Hamas, however, does not rely much on the international community, which does not do justice to the Palestinian people and the resistance factions against the Israeli occupation,” he said.

Iyad al-Qara, a political writer close to Hamas, told A-Monitor, “Hamas has succeeded in prompting Israel to stop animal sacrifices inside the mosque and release dozens of young men who were arrested at dawn on April 15 in Al-Aqsa.”

He added that while some 470 people were arrested that day, the Israeli forces have stopped arresting wanted Palestinians in the West Bank “for the first time since April 8, according to a statement by the Israeli Army Radio on April 16,” Qara said.

He added, that Hamas wants to avoid “a full-scale confrontation" and that firing rockets from Gaza is only a pressure tactic.

Yet Mukhaimer Abu Saada, a professor of political science at al-Azhar University in Gaza, told Al-Monitor it would be an “exaggeration” to say Israel has accepted Hamas’ demands. “Israel continues to carry out arrests in the West Bank and settlers did not stop their incursions into Al-Aqsa,” he noted.

Abu Saad believes Hamas is trying to preserve its image of resistance among the Palestinian, Arab and Islamic public by claiming it has imposed four conditions on Israel with threats to escalate, yet in reality the group “is not ready to engage in a military escalation with Israel.”