Hamas fires rockets at Israel in response to the violence in Jerusalem, while Palestinian President Mahmoud Abbas seems relegated to the sidelines. 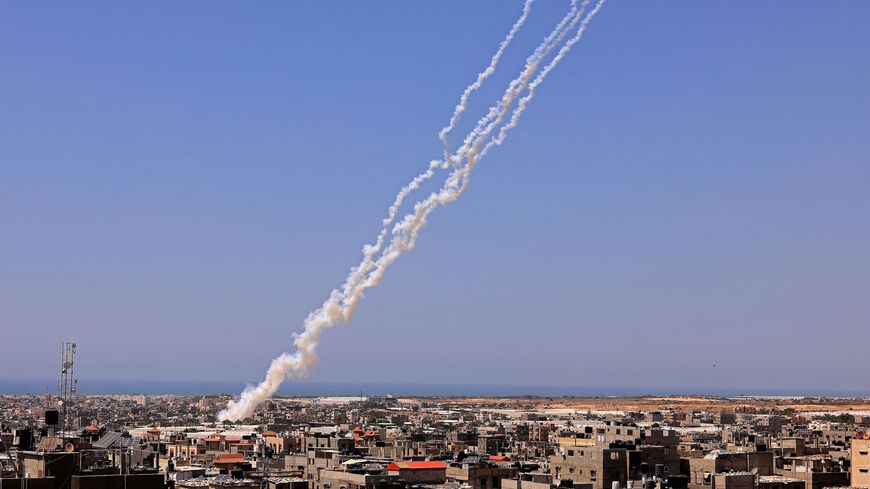 Rockets are launched toward Israel from Rafah, in the south of the Gaza Strip, controlled by the Palestinian Hamas movement, on May 12, 2021. - SAID KHATIB/AFP via Getty Images

The situation in the Gaza Strip has snowballed into a full-blown military confrontation between Hamas and Israel, following Israeli provocations in Jerusalem, namely the increasing settler incursions into the Al-Aqsa Mosque compound and Israeli pressure on the Palestinians of Sheikh Jarrah neighborhood to evacuate their homes, claiming they are not their legal owners.

It all started when Mohammed al-Deif, the commander of Izz ad-Din al-Qassam Brigades, Hamas’ military wing, made a brief statement on May 5 threatening Israel and warning it against evicting the residents of the Sheikh Jarrah neighborhood. Then Israeli security forces undertook a raid on Al-Aqsa Mosque. This prompted Hamas on May 10 to fire rockets at Jerusalem for the first time since the 2014 war.

Bassem Naim, a former health minister in the Gaza government and a member of Hamas’ international relations office, told Al-Monitor, “Hamas did not start this battle based on partisan motives; the movement was to respond to the Israeli provocations and [to preserve] the cause of Jerusalem. Hamas has trained its forces and increased its military capabilities [in the past years] not only to defend Gaza, but to also protect Jerusalem and all of Palestine. Hamas handled the Jerusalem issue rationally and gave the regional countries and the international community a chance to demand Israel to stop its settlers from storming Al-Aqsa Mosque, but Israel ignored the warnings without even taking into consideration that we are in the Muslim holy month [of] Ramadan.”

Naim added, “Hamas achieved several goals through this confrontation, the first of which is preventing settlers from storming Al-Aqsa Mosque. The second is forcing Israel, even temporarily, to back off of the residents of Sheikh Jarrah, and the third is to unify and rally all Palestinians in Gaza and the West Bank and the Palestinians of 1948 (Arab citizens of Israel) behind the Jerusalem cause.”

Sheikh Jarrah is a Jerusalem neighborhood where residents have been locked in a decadeslong legal fight against eviction orders. Israeli settlers claim that, based on a 1970 law, since owners of the land prior to 1948 were Jewish, the neighborhood's Palestinian families should be evicted and the property turned over to Israeli Jews.

As of the time of writing, Israel continues to strike Gaza and has killed several Hamas military leaders. Hamas in turn is responding by bombing various Israeli cities, including Tel Aviv, Ashkelon and Ashdod Beersheba, killing and wounding a number of Israelis. These developments pave the way for many difficult scenarios, which Hamas might not want, especially the expansion of the confrontations to turn into ground operations.

Ayman al-Rafati, a member of the Center for Regional Studies in Gaza, told Al-Monitor, “Hamas chose the time that suits it best to enter the battle and thwarted an Israeli attack by carrying out a preemptive strike against it. As a result, Israel had to take precautions and was unable to paralyze the movement’s combat capabilities, which is why Hamas was able to lead the battle comfortably. Still, several challenges lie before Hamas in this confrontation, the most important of which is the Israeli assassinations of Hamas leaders, the difficult economic situation in Gaza, in addition to Israel targeting residential buildings in the enclave.”

Hamas was greatly disappointed by President Mahmoud Abbas's decision to postpone the elections that were scheduled for May 22, reportedly for fear of losing them. And since Abbas’ move coincided with the events in Jerusalem, Hamas’ intervention came with military weight, because it saw the Jerusalem cause as an opportunity to unite the Palestinian people and pressure Israel that is unable to form its government, especially as they saw Abbas as weakened by his decision.

Wissam Afifa, director of Al-Aqsa satellite channel in Gaza, told Al-Monitor, “This round [of escalation] is different from previous ones. Israel has always sought to separate the Palestinian arenas so that it can take action against Gaza without the West Bank interfering, and vice versa. However, Hamas decided to unify the fronts this time, especially in a central, symbolic issue such as Jerusalem and Al-Aqsa Mosque. The confrontation [and its continuity] is linked to the performance of Hamas and Israel on the ground, despite their desire not to engage in an all-out war. But Hamas may set new rules of engagement to unify the Palestinian arenas; Gaza will respond to what happens in Jerusalem. Meanwhile, the extent of this round of confrontations depends on Israel and on forcing Hamas to carry on with it, although it will affect the rest of the region's files.”

This time, Hamas began bombing Israel by targeting Jerusalem instead of gradually moving forward with targets from closest to farthest like in previous rounds. This perhaps reveals Hamas’ desire to emphasize that Jerusalem is the main event, although the rocket attack led to Israel heavily bombing Gaza. The confrontation may indeed increase Hamas’ popularity among the Palestinians, but the violent Israeli bombing has so far resulted in dozens of deaths and hundreds of injuries.

Iyad al-Qara, former editor-in-chief of the Felesteen newspaper in Gaza, told Al-Monitor, “Hamas will be harmed by the military confrontation on the ground, especially if it expands, but it is ready to pay these prices in exchange for leading the national project since the Palestinians in Ramallah and Jerusalem have started cheering for it. I expect the Israeli escalation to make Hamas even more popular. And if there are talks about any mediation for a cease-fire, I believe Hamas would set conditions related to Israel steering clear of Jerusalem, Al-Aqsa Mosque and Sheikh Jarrah. However, Israel might find it difficult to accept such conditions, so the confrontations will most probably continue.”

Jerusalem was indeed the focal point of the current confrontation round that erupted between Hamas and Israel, but Abbas postponing the legislative elections also played a role. After the delay, Israeli circles expected that tense security incidents would erupt, as Hamas would believe that Israel was behind the decision to postpone the elections.

Whatever the outcome of the current escalation, it seems Hamas has scored points in its favor in the eyes of many Palestinians. At the same time, the movement is anticipating the possibility of Israel expanding the scale of its attacks, thus pushing both sides into a dreaded, full-fledged war.