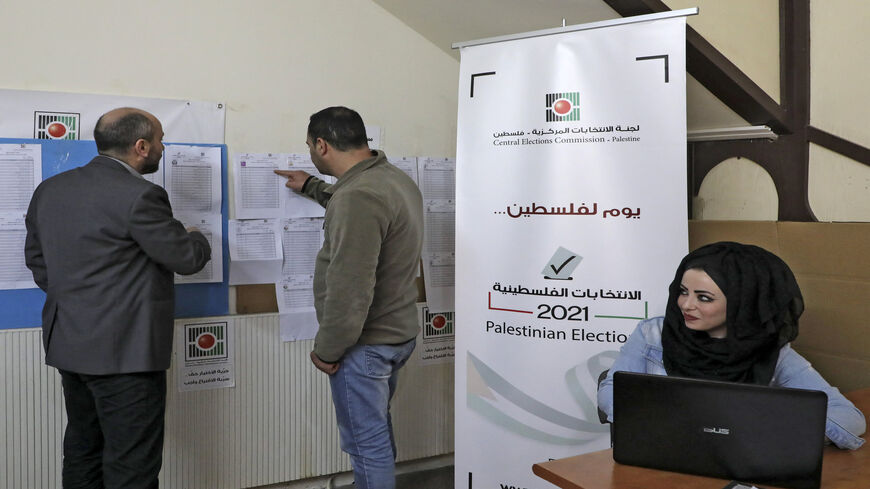 Hours before the start of the campaign process for the legislative elections April 30, there are increased reports claiming that Palestinian President Mahmoud Abbas would announce the postponement of the elections scheduled for May 22, as Israel refuses to allow ballots in Jerusalem — although Israel did not officially announce this. The reports have raised the ire of Palestinian factions, especially Hamas.

Ahmed Majdalani, a member of the PLO’s Executive Committee, said in a local radio interview April 28 that the elections will be postponed if Jerusalemites do not take part in them since holding them without Jerusalem is unacceptable.

Meanwhile, leaders of the Palestinian factions are preparing for a meeting in Ramallah April 29, during which Abbas is expected to announce the indefinite postponement of the elections.

European Union representative to the Palestinians Sven Kuhn von Burgsdorff revealed after a meeting with Abbas April 28 that he is deploying efforts with Israel to hold the elections in Jerusalem.

Hamas spokesman Hazem Qassem told Al-Monitor, “Hamas will not discuss the option of postponement with any party. It is now considering ways to hold them in Jerusalem without having them linked to the position of Israel. Postponing the elections is not on the table [for Hamas], and we shall not discuss any step related to postponement or to what is to subsequently unfold.”

Hamas issued a statement April 28 in which it refused to postpone or call off the elections. It said that the movement does not support such a step. This national right, the statement continued, may not be tampered with, and Israel will not be exempt from the repercussions of the postponement decision. The movement called for discussing mechanisms for holding the elections in Jerusalem “without the permission of or coordination with the [Israeli] occupation.”

Former Minister of Health in Gaza Bassem Naim told Al-Monitor, “Hamas is refusing to postpone or call off the elections, since such a move would mean that a national decision is monopolized and dependent on the [Israeli] occupation. Fatah’s decision [to delay the elections] because of the occupation’s refusal to hold them in Jerusalem poses a big threat to the city. But the real reason behind postponing the elections is not the issue of Jerusalem, but the Fatah leadership’s concerns of the division plaguing its ranks.”

Many Palestinians believe that the reason behind the postponement of the elections is not related to Jerusalem, but to internal disputes within Fatah. There are three lists representing Fatah in the elections: the first affiliated with the movement led by Abbas, the second led by imprisoned Fatah leader Marwan Barghouti and dismissed Fatah leader Nasser al-Qudwa, and the third affiliated with the movement led by Mohammed Dahlan, who was also dismissed from Fatah. This division within Fatah prevents the movement from unifying its ranks against Hamas, and this will weaken its electoral position.

Mahmoud Mardawi, a member of Hamas’ National Relations Office, told Al-Monitor, “Hamas is [rejecting] the delay of the elections, as it considers such a step will have repercussions on the Palestinian political scene. We will refuse to postpone the elections, and we will contact all the factions and electoral lists to formulate a unified position, because postponing elections entrenches the Palestinian Authority’s [PA] policy of exclusivity, exclusion and monopolization.”

The reports about postponing the elections coincided with a military escalation between the Gaza Strip and Israel on April 23-24, as rockets were fired from Gaza at Israeli settlements while Israel bombed Hamas sites. The round of violence threatened to increase tensions in Gaza, prompting the Israeli army to be on alert and set up preparedness response mechanisms for fear of a renewed military escalation with Hamas.

Iyad al-Qara, the former editor-in-chief of the Felesteen newspaper in Gaza, told Al-Monitor, “The delay of the elections could be met with military escalation with Israel, but this will not change things on the ground since the real reason behind the postponement is Fatah and not Israel.”

Meanwhile, Abbas decided April 27 to send Hussein al-Sheikh, a member of the Fatah Central Committee, to Qatar for talks with officials on ways to pressure Hamas into agreeing to postponing the elections.

Al-Monitor learned that Hamas is examining options to respond to the postponement of the elections, such as agreeing with the factions to restore the PLO, elect a national council and call for lifting the PA sanctions on Gaza. But it seems Fatah may offer Hamas a scenario of forming a unity government as an alternative to the elections.

Wissam Afifa, director of Al-Aqsa satellite channel in Gaza, told Al-Monitor, “There is a prevailing conviction within Hamas whereby the elections might be postponed due to the internal crisis plaguing Fatah, the Western pressure on the PA whereby it may lose the elections and Israeli warnings about Hamas’ victory in the West Bank and gaining new legitimacy.”

He added, “The closest option available to the PA as an alternative to the elections is to form a unity government, but I do not think that Hamas will participate in such a government. It will instead try, with some factions, to find legal mechanisms to end the monopolization on Palestinian decision-making, although the Palestinian scene after postponing the elections will not be the same as before. The Fatah internal division will linger, and Hamas will deem itself as hypothetically victorious as Fatah fears the elections amid its [inability] to appear unified.”

It seems Fatah is seeking to postpone the elections without portraying itself as the one disrupting the electoral process, as this would tarnish its image. The Palestinians are not convinced of the arguments put forth by the movement to postpone the elections. They believe that there are several ways to overcome the Israeli rejection of holding them in Jerusalem. But Fatah is trying to dodge the elections while seeking to monopolize the decision-making and limit Hamas’ participation to some pro-forma aspects.

Hamas is not showing any flexibility as far as postponing the elections is concerned. It deems the elections as a historic opportunity to entrench itself within the Palestinian political system and put an end to the monopolization of the decision-making on the part of Abbas and those around him. As a result, Hamas’ options regarding this postponement will oscillate between garnering the support of factions or seeking escalation with Israel.