Hamas won a large majority in the student elections at Birzeit University in the West Bank, pointing to the movement’s growing popularity at the expense of the divided Fatah movement. 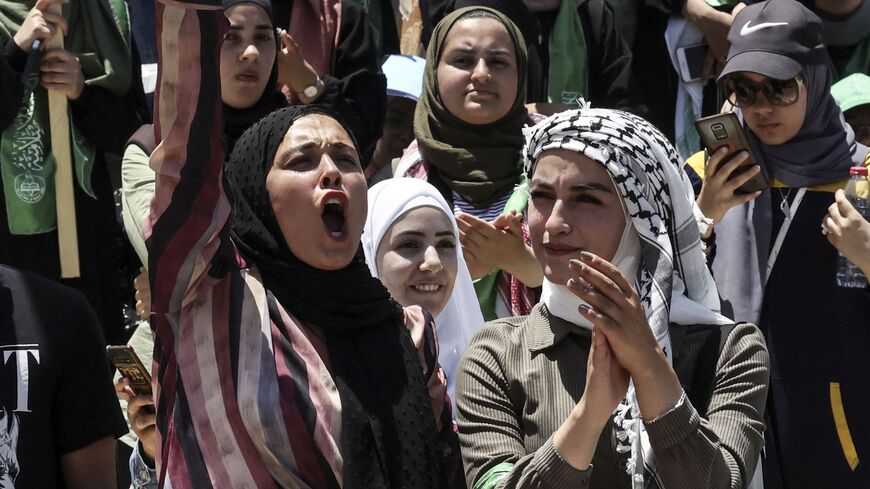 Palestinian students supporting the Islamic Hamas movement celebrate a victory in student elections at Birzeit University on the outskirts of Ramallah in the occupied West Bank on May 19, 2022. - ABBAS MOMANI/AFP via Getty Images)

Five blocs competed for the 51-seat student council elections, while a 78.1% voter turnout was registered.

On its website, Birzeit University said the elections, which came following a two-year hiatus due to the coronavirus pandemic, distinguishes the university and consolidates democratic practice and the university values ​​and vision in an electoral process known for its integrity and transparency. It added that student council elections will be held on an annual basis.

While the Fatah-affiliated bloc defamed Hamas’ money and actions in the region, the Hamas-affiliated bloc argued that Fatah upholds security coordination and peace with Israel.

Amjad Mezyad, deputy head of the Islamic Wafa bloc in Gaza, told Al-Monitor, “We congratulate Hamas for this great victory that serves as a clear message, whereby the Palestinian students chose the resistance path and refused to make compromises as far as our Palestinian rights are concerned. This has been made crystal clear. The West Bank has spoken up and elected Hamas, i.e., the Palestinian resistance.”

He added, “Showing off the resistance missiles in Gaza is clear evidence that the people want resistance. The coming days will prove that Hamas has strategic [influence] in the West Bank, while other political factions have lost influence.”

“The West Bank chose Hamas as their representative, which is indicative of the general mood in the West Bank. The Islamic bloc always raises student-oriented slogans in every academic and scientific aspect, and Hamas believes the students’ vote is a political indicator of its progress because it shows the trends of future generations. Despite the arrests and restrictions imposed by the Palestinian Authority (PA) and the occupation in Birzeit University, this great victory was achieved,” he added.

The Fatah movement's loss in the elections caused frustration among the movement’s cadres. Secretary-General of the Fatah Central Committee Jibril Rajoub said in a May 20 statement that the Fatah movement would reassess its relationship with the PA to benefit from the lessons learned from this loss.

Meanwhile, Fatah's Secretary in Ramallah and al-Bireh Muwaffaq Sahweil submitted his resignation from the Ramallah and Al-Bireh District Committee and described Fatah’s loss in the elections as a “resonant loss.” He called for the formation of a commission to investigate the election results.

Munir al-Jaghoub, head of the media office of Fatah’s Mobilization and Organization Commission, told Al-Monitor, “Hamas’ victory in the elections reflects the Birzeit University students’ resentment toward Fatah’s behavior in the recent period. There are even Fatah voters who voted for Hamas, thinking that this would improve the conditions at the university, and Fatah lost due to its actions.”

“Fatah’s loss [at Birzeit University] did not come as a surprise, as there is a panoply of issues that were not properly addressed by the Palestinian government, such as the killing of human rights activist Nizar Banat, Fatah’s dominance over student councils and the PA’s mishandling of the recent teachers’ strike," he said.

Jaghoub added,“Fatah failed to learn from its 2006 loss [in the parliamentary elections]. Meanwhile, Hamas’ victory is based on several reasons, including the location of Birzeit University, which is considered a historical stronghold in Palestine and is the oldest Palestinian academic institution, founded in 1924. Its tendencies are liberal, not Islamic, and it holds fair and transparent elections.”

Talal Okal, a political analyst and writer for the West Bank-based newspaper al-Ayyam, told Al-Monitor, “Hamas’ victory conveys many geospatial messages and reflects its growing popularity in the West Bank in light of the current situation in the Palestinian territories, including the Israeli escalation in the region. Also, Hamas’ policies and resistance programs are receiving growing support [in the West Bank], which was reflected in the election results.”

He continued, “The electoral program’s focus on praising the resistance’s missiles shows that the Sword of Jerusalem Battle (in reference to the May 2021 Israel war on Gaza) last year was widely welcomed by the residents of the Sheikh Jarrah neighborhood in Jerusalem. The battle shifted the Palestinian popular support toward Hamas, and this can help national mobilization for various political programs.”

Okal also mentioned the recent municipal elections held in the West Bank, which resulted in the exit of Fatah candidates from major lists. “The main problem within the Fatah movement is the conditions of the movement itself. This is why Fatah’s progress at this time is very weak and it cannot compete with a large bloc that has a political ideological dimension like Hamas. The Palestinian street chose Hamas due to the absence of legisliative and presidential elections.”

He added, “However, despite Hamas’ victory, divisions will remain since Hamas is not only confronting the [Israeli] occupation, but also the PA. So no change will be expected in the short term since Israel will not allow Hamas to lead the Palestinian political [arena].”

University elections in the Palestinian territories offer students a rare opportunity to vote at the ballot box. Palestinians have not witnessed general elections since 2006 when Hamas defeated Fatah.

PA President Mahmoud Abbas promised to hold Palestinian national elections last year but called them off weeks ahead of schedule due to the Israeli refusal to allow Jerusalemites to participate in the elections.