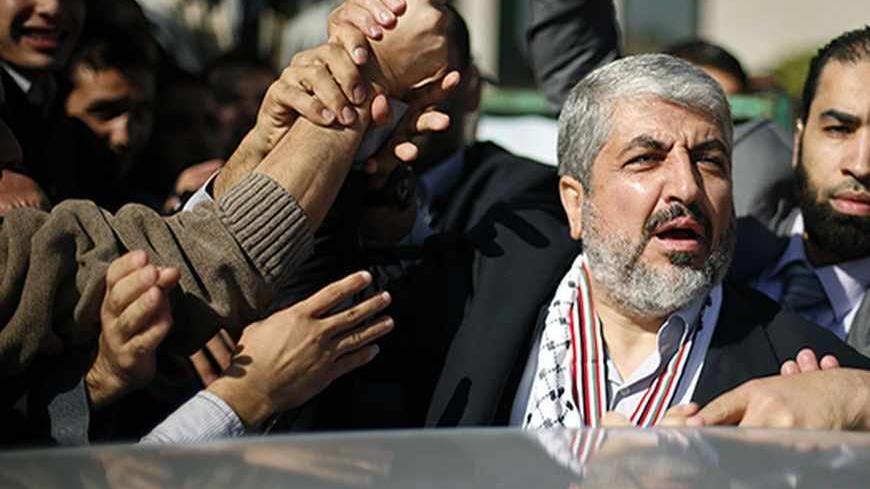 Palestinian universities have witnessed in recent weeks consecutive elections for their student councils. Rivalry has been heated between two blocs affiliated with the two main traditional rivals in the Palestinian arena. Fatah was represented by the “Fatah Youth Organization,” while the “Islamic Bloc” represented Hamas.

The election results varied between universities. Hamas has won the majority of the student council’s seats in the Islamic University in the Gaza Strip — its historic stronghold, while in Birzeit University in the West Bank it has won 20 seats against 23 for its rival Fatah. In the Palestine Technical University, Hamas won nine seats.

Elections have been at the core of Hamas’ political system, its interests and even its historic composition. Elections have constituted the main reason for its political existence. This is especially true as the Islamic movement has fought many electoral battles against the PLO, in an attempt to fill the gaps and entrench its role in Palestinian political life.

Elections have become increasingly important for Hamas, a part of its political practices in the Palestinian territories, and one of the political and legal means to prove its existence, especially amidst its political conflict with the PLO against the backdrop of the peace deal with Israel. Hamas has also participated in most of the student elections in universities, colleges and institutes, the elections of trade unions of doctors, engineers, lawyers, teachers, accountants, nurses and many more.

Although the Palestinian Muslim Brotherhood has launched its activities from the Islamic University of Gaza, it expanded its influence in all colleges and universities in the West Bank. Hamas groups have had a heavy presence in the universities of Najah and Birzeit — the PLO’s stronghold — as well as in Gaza Polytechnic Institute (GPI), the Modern College, the Islamic University in Hebron and Bethlehem University.

Despite the poor security conditions in the West Bank in the years following Hamas taking control over the Gaza Strip in mid-2007, and the ban on its students’ activities and events, Hamas has managed to establish a foothold in these universities. The Islamic movement has even gained influence to the extent that it has won the majority of seats in many student councils.

Hamas has realized that universities serve as political platforms, as they are the only place where young people gather in a legal manner. Universities constitute fertile soil for the dissemination of ideas, attracting supporters and organizing members. Thus, the group has been working on activating its Islamic bloc in universities, which was the main amplifying force to the movement’s influence in the Palestinian territories.

As for liberal universities — such as the universities of Najah, Birzeit and Bethlehem — Islamists have been able to influence many of their colleagues, pulling them to their side, which has  helped them compete with the national forces in the student elections and gain control over student unions and councils.

One can say that the Islamic Bloc has managed to attract a large number of students due to the fact that the majority of them come from the countryside, where the atmosphere continues to be puritanically conservative and religious. Hamas has taken advantage of this fact and played the religion card to gain the support of many religious young people.

Hamas believes that there are objective and subjective reasons behind the progress it has achieved within its student frameworks. Although the Islamic bloc won a sweeping victory by verbal vote in the Islamic University, this was not impressive for the decision-makers in the movement.

Hamas leaders believe that its victory in its historic stronghold is not something new or extraordinary. The leaders were actually alarmed by the very low turnout among students, which did not exceed 59%. This is not to mention that many student blocs have refrained from participating in the electoral process — either to vote or run as candidates. This has paved the way for Hamas’s victory without much trouble. Thus, its triumph has not echoed across the Palestinian territories on the eve of the election.

In this context, some researchers who are following the progress of the Palestinian Islamists note that the movement has been mobilizing its members and campaigning so as to influence the masses of students, on the ground that these elections would serve as “a rehearsal” for the legislative or presidential elections. Thus, [the recent student elections] suggested the loss of the required mass interaction, which does not please Hamas, prompting it to hold internal evaluation meetings and public debates to discuss the tepid reaction [among students], which does not bode well [for the political elections].

As for the West Bank, Hamas’s victory in a number of universities came as a result of tight security measures on the part of the security apparatus and Israel as well. This is akin to the situation in the Gaza Strip before Israel’s withdrawal in 2005, which paved the way for Hamas to take control over the Gaza Strip in mid-2007. Back then, Hamas managed to adjust to the security pressure and was able to achieve popular support that was reflected in the student election results.

In terms of figures, in Birzeit University for instance — the oldest Palestinian university, with 8,000 students — Hamas has won 20 seats, compared to 19 out of 51 seats last year. The difference in votes was reduced from 700 to 350 votes. In turn, Fatah has lost three seats, as it has won 23 seats, compared to 26 last year. Thus, Hamas considers that it has won overall, especially in light of the continuous decreasing popularity of what has been left of the Palestinian left-wing.

Therefore, the PA will consider the election results in Birzeit University as marking a decline in its influence, which would have a direct impact on any electoral decrees issued regarding legislative or presidential elections.

Furthermore, one can say that Hamas has managed to attract students due to the security measures undertaken by the PA against all student activists, except for those affiliated with Fatah.

Additionally, the PA’s political and economic crisis has worsened, especially during the recent period after the peace process reached a dead end without making any real achievement for the Palestinians. The economic crisis has also exacerbated, which has been clearly evident in recent months as the PA failed to pay its employees’ salaries and has been forced to borrow from local banks.

However, it should be noted that Hamas is well aware — even if it does not declare it publicly — that its influence in universities does not actually suggest its increasing popularity. Its triumph has been the result of the differences between the PLO factions due to the PA’s poor performance, and the fact that some of the members of the national movement have voted for Hamas without joining its ranks. This has undoubtedly tipped the balance in Hamas’s favor.

This is known as the “punitive vote,” as some of the students have cast ballots in favor of the Islamic Bloc out of their hatred for its Fatah-affiliated rivals and not out of their ideological conviction. This was also the case in the 2006 Legislative Council elections. However, this does not mean that Hamas’ popularity is declining, especially in light of the continuous failures on the part of the PA.

Adnan Abu Amer is dean of the Faculty of Arts, head of the Press and Information Section, as well as a lecturer on the history of the Palestinian issue, national security, political science and Islamic civilization at Al Ummah University Open Education.