The victory of Hamas in the West Bank university elections seems to indicate that support there is waning for the Palestinian Authority and Fatah. 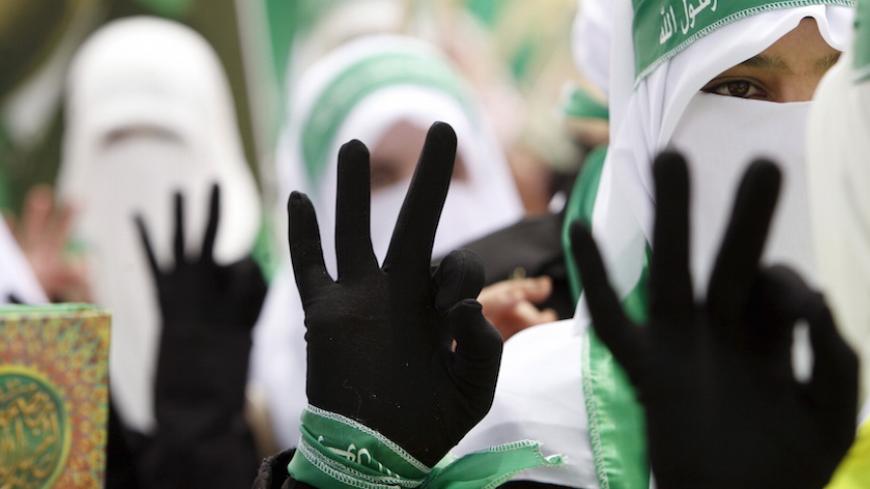 The results of the student council elections at Palestinian universities in the West Bank came as a big surprise for Hamas and the Palestinian Authority — a happy one for the former and a bad one for the latter. Hamas was able to achieve electoral success despite the security pressure it has been facing from the PA and Israel at once.

The April 21 election at Palestine Polytechnic University in Hebron, in the south of the West Bank, resulted in a tie between the Islamic Bloc, Hamas’ student arm, and the Fatah Youth Movement, with each party winning 15 seats. Meanwhile, on April 22, Birzeit University announced the victory of the Islamic Bloc, which beat Fatah with 905 votes.

Abdul Rahman Hamdan, the head of the Islamic Bloc, told Al-Monitor, “This victory is proof that Palestinians support the resistance, as it is the only way to obtain our rights and refuse the PA’s project, which is based on negotiations. Although the bloc was fiercely attacked by the Israeli occupation and the PA, we won. I expect the campaign to escalate in the coming phase.”

Hamas felt overwhelming joy after its victory in these elections, as it needed to prove that it has maintained its popularity. The movement was concerned about the security pressure on it in the West Bank and was afraid that the living conditions in Gaza would deteriorate further and people would demand a higher standard of living.

In an unprecedented article published April 24, Fathi Hamad, the former interior minister in Gaza and a member of Hamas’ political bureau, said the Al-Qassam Brigades’ rockets triumphed in Birzeit University.

On April 22, the new organization for Hamas prisoners in Israeli jails congratulated Hamas on its victory in the student elections, calling it a referendum on supporting the armed resistance in the West Bank and an indication that Hamas is bigger and stronger than any eradication project.

Khaled Meshaal, the head of Hamas’ political bureau, participated April 23 over the phone in the bloc’s celebration in Birzeit and announced Hamas’ readiness for legislative and presidential elections.

Youssef Rizqa, the former information minister in the Hamas government, told Al-Monitor, “The reasons behind the victory of Hamas and the defeat of Fatah lie beyond university and stem from [President Mahmoud] Abbas’ stance vis-a-vis the resistance and the recent war on Gaza, the paralysis of the consensus government and the denial of the reconciliation.”

On April 23, Fatah parliament member Majid Abu Shamala agreed and said that Fatah’s defeat — despite circumstances being in its favor — calls for an investigation to prevent its repetition.

Hamas’ victory resonated over social media networks, and the related discussions asserted that universities serve as a barometer of Palestinian politics and what happened was an electoral tremor whose aftershocks go beyond the confines of universities. Although Birzeit University is liberal and close to the Palestinian decision-making center, Hamas won. The results revealed a deep-seated crisis in Fatah’s ranks.

While Hamas expressed joy, Fatah was devastated by this setback on its own geographic territory in the West Bank.

Abdallah Kmeil, a prominent youth leader in Fatah, noted April 25 that Hamas’ victory sounded alarm bells for Fatah because failure in the elections indicates a weakening of Fatah leaders.

On April 23, Amin Maqboul, the secretary-general of Fatah’s Revolutionary Council, called the Birzeit University election results an unexpected surprise. He said Fatah will launch an inquiry into its failure and take appropriate measures. The officials held responsible for this defeat might even be dismissed.

A prominent Palestinian official told Al-Monitor on condition of anonymity that Abbas “held a meeting with Fatah cadres in Birzeit in the past few days and scolded them for their huge loss facing Hamas supporters, knowing that they were offered financial allocations and security facilities to allow them to win.”

Fatah’s members realize there are several internal gaps. The reconciliation project has hit a wall and the negotiations with Israel were halted, which means that Palestinians will resort to Hamas’ alternative project. There are also internal disputes between Abbas and Mohammed Dahlan’s currents, in addition to security chaos in some West Bank regions between Fatah groups and the PA.

Fathi Qarawi, a member of Hamas' Legislative Council, told Al-Monitor, “Arresting and pursuing students reveals the true face of the PA. If it had known the bloc would win the elections, it would have used weapons to impede this victory. The PA won’t blink before oppressing any other attempt for Hamas to win, given its repeated losses.”

An-Najah National University in Nablus announced it would delay its student elections that had been set for April 26.

Kamal Abou Aoun, a member of Hamas’ political bureau, told Al-Monitor, “Fatah is being selective in the elections in the aim of showing its force in syndicates whose elections it expects to win, while it refrains from participating in syndicates where it fears losing. This indicates its quest to protect its narrow partisan interests.”

Palestinian universities in Gaza do not reflect an ideological and intellectual amalgam, just like the West Bank. At the Islamic University, Hamas wins in the absence of competition from other student blocs. At Al-Azhar University, Fatah effortlessly defeats Hamas. Other universities do not have significant electoral importance.

The latest election results pushed Palestinians to conclude that people hate their ruler to explain Hamas’ victory in the West Bank, where Fatah rules, and note the possibility of Hamas’ declining popularity in Gaza, where it rules. Holding the syndical, university and political elections in the West Bank and Gaza at once will be enough to consolidate or refute this conviction.