Hamas and Fatah engaged in reciprocal arrest campaigns of each other's supporters in the Gaza Strip and the West Bank, though the Palestinian Authority denies its arrests were political in nature. 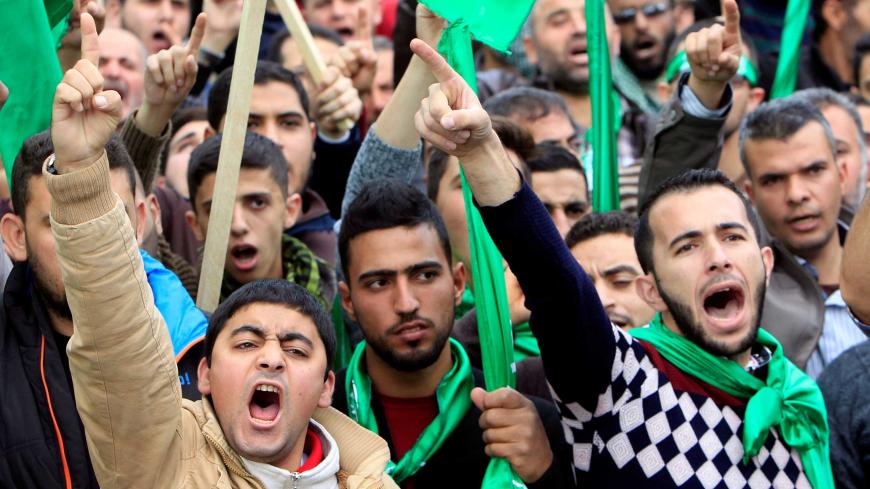 GAZA CITY, Gaza Strip — The Hamas government in the Gaza Strip released from custody on Sept. 27 several Fatah supporters, including students at Gaza universities and members of Fatah’s Office of Mobilization and Organization. The Fatah supporters were arrested Sept. 24 for voicing support for Palestinian President Mahmoud Abbas, who gave a speech to a session of the UN General Assembly Sept. 27.

As Hamas arrested 70 Fatah supporters in Gaza, the Palestinian Authority (PA) in the West Bank embarked upon a similar campaign of arrests, targeting Hamas supporters and members of its student Islamic bloc at Birzeit University in Ramallah. Although the PA detained over 100 people, it did not state that the arrests were politically motivated.

Muhannad Karajeh, an attorney at Prisoner Support and Human Rights Association (Addameer), told Al-Monitor, “Following the Hamas government release of detainees, the PA freed some of the lately detained Hamas supporters and brought others to trial Oct. 1 on charges of gun possession and obtaining money from illegal sources.” He went on, “We learned from our experience in presenting pleadings on behalf of the political suspects since the 2007 political divide that, sadly, the PA has been using these same charges against all of its political detainees.”

The Hamas internal security apparatus in the Gaza Strip arrested Mounzer al-Hayek, Fatah’s media official in the eastern Gaza branch, three days prior to Abbas' speech at the United Nations. He was arrested for preparing pro-Abbas marches.

Speaking to Al-Monitor, Hayek said, “[Hamas’] internal security apparatus summoned me Sept. 24 for an important matter, which the summons did not mention. Once I got to their bureau in eastern Gaza city, I was arrested [and detained] for three days. I was also interrogated about the pro-Abbas Facebook campaign on Fatah’s page, of which I am the administrator, the partakers in said campaign, and whether or not it will turn into actual protests.”

“I was released a few minutes before the president’s speech Sept. 27. So were all of the detainees. I learned later on that they amounted to 70 Fatah members who had joined the pro-Abbas campaign,” he added.

The Palestinian Legislative Council (PLC) members for Fatah in the Gaza Strip declined to make any comment to Al-Monitor on the political arrests. Nevertheless, a PLC member for Fatah who requested anonymity told Al-Monitor that Hamas still rules in the Gaza Strip and has the authority to arrest Fatah supporters there. “We, as Fatah MPs, are unable to object to these arrests since we are doing the same thing in the West Bank, where the PA has the power and authority.”

Al-Monitor spoke to the mother of Uwais Ouri, who was arrested on charges of belonging to Hamas' Islamic bloc at Birzeit University. She said that Palestinian Preventive Security summoned her son the morning of Sept. 27 and he has not returned home since.

“The judge said at the court’s hearing Oct. 1 that he is facing gun possession charges and that he is to remain under arrest for one more week," she said. "We still know nothing about the verdict. My son is a student supporter of Hamas and he is facing false charges.”

Fathi Qarawi, a PLC member for Hamas, told Al-Monitor that Palestinian Preventive Security and Palestinian General Intelligence in the West Bank summoned and detained Hamas supporters and members. He said the reasons behind the arrest campaign were vague.

“We do not have news about the detainees or the charges pressed against them, particularly since Hamas is a weak party in the West Bank," he said. "It neither has a genuine political presence nor does it organize events, unlike in the Gaza Strip. The only activities it organizes are limited to university students' blocs.”

He said, “Sadly, the PA is targeting said bloc, arresting its members every now and then on different charges, mainly: partaking in anti-PA activities, gun possession and obtaining funds from suspicious parties.”

Qarawi said that political arrests intensify each time Hamas’ security apparatus in the Gaza Strip arrests Fatah supporters. “Yet the PA and its security services constantly deny any reciprocal arrest campaigns on political grounds,” he said.