Hamas says rise in arrests is related to coming elections

Fatah and Hamas are exchanging accusations about arrests of their members in the West Bank and Gaza Strip, with each side claiming the other is trying to influence elections that haven't even been scheduled yet. 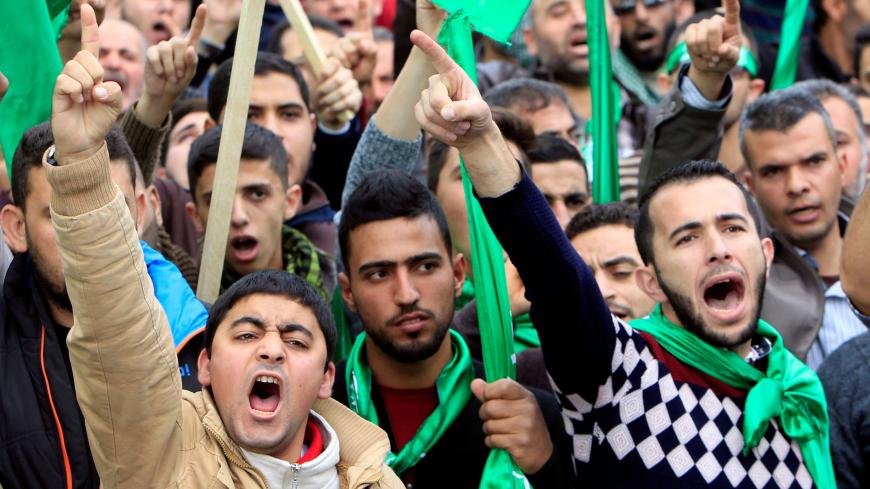 RAMALLAH, West Bank — West Bank security services are continuing a crackdown on Hamas members, having arrested more than 200 recently in what Hamas says is a politically motivated campaign.

In just one week at the beginning of 2020, Hamas said in a Jan. 13 statement, 195 Hamas members were arrested in the West Bank on political grounds. Those arrested include university students, political activists and ex-prisoners freed from Israeli prisons; most were arrested in Nablus and Hebron.

The statement explained that since Palestinian Authority (PA) President Mahmoud Abbas called Sept. 26 for parliamentary and presidential elections to be held this year, “Hamas activists and cadres have been targeted in the arrest campaign to give information of the movement’s electoral activity and candidates.” It noted, “The PA security services raided 144 houses and seized nearly 3,000 Israeli shekels [$867], 55 cellphones, 10 computers and dozens of banners and books.”

In Hamas’ eyes, those arrests — on top of those conducted in mid-December — correlate with PA attempts to obstruct the as-yet-unscheduled elections. Speaking to Al-Monitor, former Palestinian Minister of Detainees Wasfi Qabha said, “These pursuits are undoubtedly linked to the elections. There is a current within the PA that does not want the elections to be held, and this current is represented by the … muffling of voices. They are attempting to impose a police state on Palestinians and are behind the politically motivated harassment and pursuit of Hamas members.”

He added, “All confidential polls and the occupation's intelligence estimates show that Hamas’ share in the elections — if held in the West Bank — will be greater than in the previous elections. This is why they are trying to hinder the elections by every means.”

The arrests, Qabha said, are focused on the Islamic bloc — Hamas' student wing — given that student action is all that remains for Hamas in the West Bank. Hamas controls the Gaza Strip, but in the West Bank, where the PA makes the rules, the movement's political, charitable and syndical support has dried up.

There are no precise figures on the number of Hamas detainees in the West Bank, as arrests have been ongoing.

“The PA is making daily arrests. There are those who were detained for one day — others for a week or months. … Others have been in detention for almost a year," Qabha said. “I can’t grasp that the Palestinians are being pursued for their organizational action, be it in the West Bank or Gaza Strip.”

Hamas and its rival Fatah have been exchanging accusations and criticism lately, mainly in terms of the elections. Hamas has repeatedly called on Fatah's Abbas to set an official date for the elections, but Abbas has refused until Israel agrees to let Palestinians in Jerusalem participate.

On Nov. 26, Hamas handed over to Central Elections Commission Chairman Hanna Nasser its consent for elections, along with some requirements, most notable is to give free rein to Hamas political activities in the West Bank, which would mean halting the political arrests of Hamas members there.

Fatah has also accused Hamas of unfounded arrests of its members in the Gaza Strip. Most recently, on Jan. 13, Hamas security services in Gaza detained Fatah spokesman Iyad Nasser, who is a member of the Fatah Revolutionary Council.

Speaking to Al-Monitor on condition of anonymity, a Fatah official in the Gaza Strip said recently, “Members of Fatah and the PA security services continue to be arrested. The Hamas prisons are filled with detainees, some of whom are incarcerated for months and severely tortured.”

The source added, “Despite all of the arrests and pursuits by Hamas, the masses in Gaza took to the streets Jan. 1 to celebrate [the 55th anniversary of Fatah], which shows that the majority in the Gaza Strip supports Fatah, and that there is a minority in Gaza ruling and repressing a majority.”

According to the source, the arrests of Fatah members in the Gaza Strip can't be compared with those of Hamas members in the West Bank. “Freedoms in the West Bank are greater than the freedoms in Gaza. Hamas is cracking down on Fatah’s activities and allowing the influence of dismissed Fatah leader Mohammed Dahlan to strike Fatah members, serving as another Hamas arm to oppress them.”

Khalil Assaf, chief of the Public Freedoms Committee in the West Bank, told Al-Monitor political arrests in the Gaza Strip and West Bank have never stopped, and actually increase every time Fatah and Hamas step closer to each other, "which is what happened when they agreed on holding elections.” He noted that the two movements do not acknowledge that the arrests are political, except when their own members are arrested.

"Political arrests will only stop when the divide is over and the rule of law truly prevails,” he added.

Such arrests have taken place ever since the PA was established in 1993 in accordance with the Oslo agreement, but the arrests increased significantly after Hamas seized control of the Gaza Strip in 2007. "Mutual trust, as well as a legal and democratic environment, are necessary for the elections. These factors are, however, unavailable in the West Bank or the Gaza Strip," Assaf said.

He explained that there is cynicism about whether elections are even meant to take place. One theory, embraced by Hamas and others, is that Abbas does not intend to leave office at all, and only announced that elections would be held because he expected Hamas or Israel to reject the idea, thus allowing him to blame them and avoid elections at the same time.

“It's no secret to anyone that the elections will not be held," Assaf said, "and that even in case they are conducted, the losers will not recognize their results.”