The arrest campaign targeting Hamas leaders and members in the West Bank has intensified in recent weeks, suggesting an attempt by the PA to intimidate the movement from participating in the upcoming elections. 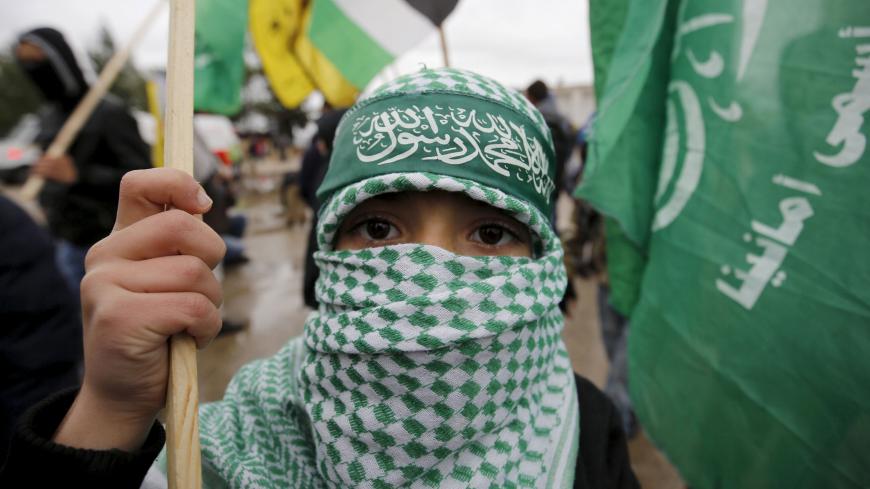 A Palestinian boy wears a Hamas headband as he attends the funeral of Palestinians, who allegedly carried out attacks against Israelis, after their bodies were released by Israel, in Silwad near Ramallah, West Bank, Jan. 3, 2016. - REUTERS/Mohamad Torokman

Since mid-December, the West Bank has been the target of an increased arrest campaign led by Israeli and Palestinian security forces against dozens of Hamas members and leaders. The campaign is ongoing, and the number of arrests has not been specified. On Dec. 12 and Dec. 16, Israel carried out wide arrests in Nablus, Tulkarm, Ramallah, al-Bireh, Hebron and Jericho that included member of the Palestinian Legislative Council Mohammad al-Natsheh, former Minister of Local Governance Issa al-Jaabari, Hamas leader Abdul Khaleq al-Natsheh, several former detainees and Shada Hasan, a student at Birzeit University.

On Dec. 14 and Dec. 16, Hamas revealed that the Palestinian Authority (PA) security forces had arrested more than 40 of its members, including former detainees, university students, journalists, young activists, rights activists, traders, engineers and academics. The PA also summoned 36 Hamas members and raided and searched 24 houses, according to Palestinian activist Mostafa Jamil who disclosed the names of the Hamas members arrested by Israel and the PA in a Facebook post.

The timing of Israel’s and the PA’s simultaneous arrests of Hamas members is suspicious, as the arrests coincide with the Palestinian preparations for legislative elections scheduled in the coming months. This might deprive Hamas of participating in these elections, amid attempts at emptying the West Bank of Hamas members who might take part in the electoral campaign and intimidating any Palestinian wanting to run on its list by reminding him that the PA or Israel would arrest him if he so chooses.

Hamas leader Abdul Rahman Chedid told Al-Monitor, “The joint campaign targeting dozens of Hamas leaders and members in the West Bank carries three indications. First, it puts field pressure on Hamas to distort its positive decision to participate in the elections. Second, it prevents Hamas from celebrating its 32nd anniversary in the West Bank, which means that its electoral activities and freedoms would not be guaranteed. Third, the orchestrated arrests reflect the ongoing security coordination between Israel and the PA despite their political boycott. Their coordination no longer banks on a political track with Israel, but it is a duty the PA commits to so as to take personal and economic benefits from Israel.”

Palestinian Prime Minister Mohammad Shtayyeh said Dec. 14 when he welcomed a delegation from Germany's Green party that no Palestinian has been arrested for his political affiliation or beliefs.

On Dec. 16, Hamas spokesman Hazem Qassem said during a press conference that the PA arrests against Hamas confirm its mentality and behavior of exclusion. He added that the PA is holding on to its delusion of eradicating Hamas in the West Bank. He called on setting the stage for free and transparent elections in the West Bank.

Israel issued military verdicts Dec. 17 to transfer several arrested Hamas leaders to administrative arrest for four to six months, which proves arrests are a pressure card on Hamas to refrain from participating in the elections. Hamas cadres would not be in the West Bank if the elections occur, which would jeopardize their chances of winning.

Israeli affairs’ expert at Vision for Political Development Imad Abu Awad told Al-Monitor, “The arrests targeting Hamas in the West Bank have several causes. For one, they coincide with Hamas’ founding anniversary Dec. 14 and the desire of the PA and Israel to hamper its arrangements to commemorate this occasion. Second, Israel and the PA have security concerns that Hamas might be preparing to wage armed attacks on settlers and the Israeli army, despite the current, yet temporary, security calm in the West Bank. Security coordination between Ramallah and Tel Aviv is ongoing because the PA needs it more than Israel does. It is unlikely the arrests would prevent Hamas from participating in the elections. It will participate in the hope of winning and benefit from Fatah’s internal chasm.”

The PA and Israel’s arrests coincide with Hamas’ 32nd anniversary and they fear it might organize celebrations in the West Bank for the occasion, like it did in the Gaza Strip Dec. 14 with its massive festivals.

On Dec. 12, Israeli Channel 12 reported Israeli security sources as saying that the Hamas arrests aim at forbidding it from celebrating its 32nd anniversary in the West Bank.

Chief of the Public Freedoms Committee in the West Bank Khalil Assaf told Al-Monitor, “The arrests in the West Bank aim at unsettling the situation ahead of the elections and increasing security tensions. The coinciding Israeli and Palestinian arrests will reveal coordination with the PA to pursue Hamas. I hope Hamas will not nominate any of its leaders for the elections, because their fate will be pursuit and arrest.”

Notably, arrests of Hamas members have increased, despite the security calm in the West Bank, where an Israeli soldier was found stabbed to death Aug. 8 in Gush Etzion settlement. Israel’s Internal Security Service, Shin Bet, announced Aug. 9 foiling more than 300 attacks ordered by Hamas command in the Gaza Strip since early 2019.

However, the calm did not reassure Israel completely, and it launched a series of arrests out of fear that Hamas might be preparing for armed operations in the West Bank. By looking at those who have been arrested, it seems obvious there are political, election-related goals behind their arrest, mainly depriving Hamas of leaders who can spearhead its electoral campaign.