Why was the West Bank excluded from Palestinian reconciliation?

It seems that the recent reconciliation agreement that aims to end the division between Hamas and Fatah has ignored reforms and changes in the West Bank, focusing more on the Gaza Strip. 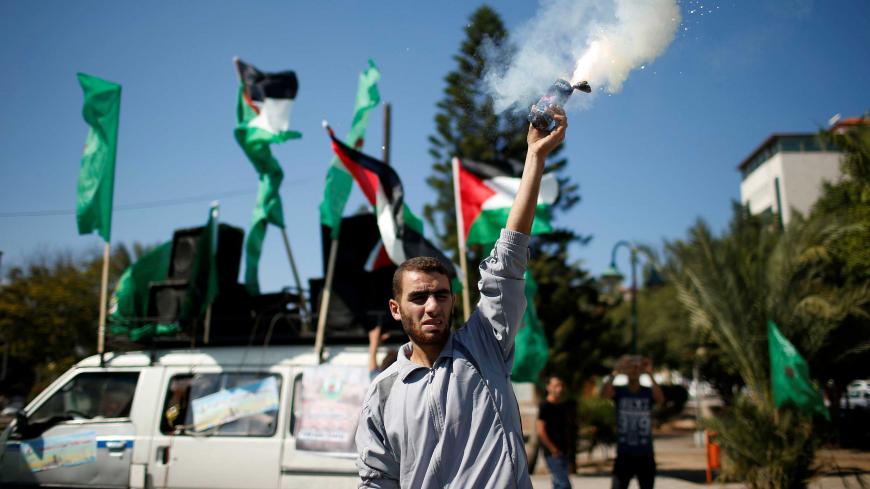 GAZA CITY, Gaza Strip — After the 10-year Palestinian division lasting from 2007 to 2017, Hamas and Fatah signed a national reconciliation agreement on Oct. 12 in Cairo under the auspices of Egypt.

In an Oct. 11 interview with Al-Aqsa TV, Salah al-Bardawil, a member of Hamas’ political bureau, said, “Reconciliation talks are based on several foundations, most notably the implementation of the 2011 Cairo agreement, national partnership, the rehabilitation of the PLO, the activation of the Palestinian Legislative Council to oversee the government’s work, and the inclusion of both the occupied West Bank and Gaza Strip in the reconciliation,” without giving any details on the mechanisms of including the West Bank in this agreement.

These provisions also stipulate completing the procedures to enable the consensus government to fully exercise its functions and assume its responsibilities in managing the Gaza Strip and the West Bank by Dec. 1, 2017. The agreement also stresses the need for the government to find a solution to the issue of Gaza’s employees before Feb. 1, 2018. In addition, all of Gaza’s crossings need to be handed over to the government, and the PA’s security services will head to the Strip to discuss mechanisms to rebuild Hamas’ security services in Gaza.

“The first three files directly affect the lives of Gaza residents, while the government file aims to enable the government to govern Gaza and end Hamas’ rule. The PLO file addresses the issue of reform and revitalizing the organization,” he said.

“This brings us to firmly believe that this agreement is intended to bring about real-life changes in Gaza, not the West Bank,” Atallah added.

Nazih Abu Aoun, a Hamas leader from the northern West Bank city of Jenin, told Al-Monitor, “Although this agreement came to deal with the repercussions of the division, it is clear that it only addresses its effects in Gaza, without taking into account the series of measures the PA had taken in the West Bank following the division.”

According to Abu Aoun, these measures include the dismissal of the 450 employees in the West Bank who received jobs during 2006 in the 10th Hamas government and the 11th National Unity Government, in addition to the political arrests against Hamas and the closure of Hamas’ institutions in the West Bank.

Ziad al-Natsheh, from the southern West Bank city of Hebron, one of the employees dismissed by the PA, told Al-Monitor, “Everyone is celebrating reconciliation, but no one is mentioning what happened to us. This is very disappointing.”

Natsheh explained that he was hired as an employee of the Ministry of Information in 2006 and was dismissed in 2007 because he was appointed by the Hamas government at the time. He added, “We have the right to return to our jobs. We ask the delegations discussing the reconciliation to resolve our case and end our suffering, just like they are trying to resolve the issue of Gaza’s employees. If our demands are not met soon, we will organize an open sit-in.”

The reconciliation agreement does indeed stipulate that the government should work to resolve the issue of Gaza’s employees before Feb. 1, 2018, but this does not include West Bank employees who were dismissed from their jobs following the Palestinian division.

Political arrests in the West Bank have not stopped despite the reconciliation agreement. On Oct. 16, the Palestinian Information Center reported that the security services in the West Bank arrested 20 young men on charges of being affiliated with Hamas, without any legal proof, and summoned 13 others to their headquarters.

Jamal Muheisen, a member of Fatah’s Revolutionary Council, told Al-Monitor that the reconciliation is based on making changes in the Gaza Strip that revert it back to the Palestinian legitimacy, represented by the PA.

“Since the West Bank is already governed by the PA, there is no need for change there,” he said, adding, “The inclusion of Hamas in the Palestinian decision-making centers requires Hamas to adhere to the PLO's political program that is based on the recognition of Israel, which Hamas rejects.”

Muheisen stressed that Fatah does not seek to remove Hamas from the political scene, be it in Gaza or the West Bank, adding, “We want to apply one political regime in the West Bank and Gaza, and after making sure this is truly implemented, we will hold the general elections and the people will choose the next decision-maker.”

Speaking to Al-Monitor, Talal Okal, a professor of political science at Al-Azhar University, explained that the reconciliation agreement focuses on the Gaza Strip because the residents of Gaza, who lived under Hamas’ rule for 11 years, were much more affected by the repercussions of the division than the West Bank residents living under the PA’s control.

The division led to an increase in the unemployment rate, which reached more than 46%, while the poverty rate reached 65% among the population of Gaza, according to a Jan. 8 report by the independent Palestinian Center for Human Rights. Also, PA President Mahmoud Abbas imposed a series of punitive measures against Gaza, such as reducing the fuel supply to the Strip’s only power plant and deducting 30-50% of the PA employees' salaries in Gaza.

However, Abu Aoun believes “the process of change in living conditions and the political situation in the West Bank must go in parallel with the Gaza Strip, otherwise there will be a major imbalance in this reconciliation that is based on ending all the repercussions of the division in all the provinces of the country.”