Palestinians are wondering why President Mahmoud Abbas has yet to lift the sanctions he had imposed on Gaza to pressure Hamas to dissolve its administrative committee and relinquish control of Gaza to the Palestinian Authority. 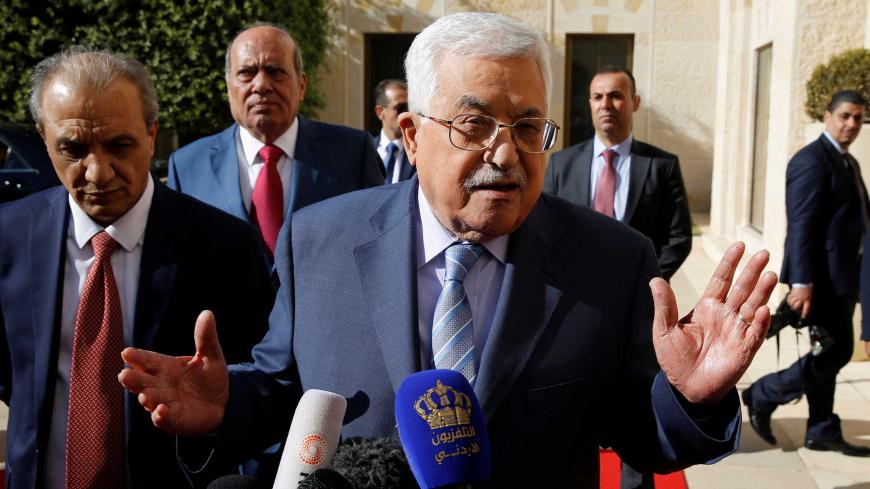 GAZA CITY, Gaza Strip — Palestinians in the Gaza Strip are outraged that sanctions against Gaza remain in place despite the reconciliation agreement signed Oct. 12 by Fatah and Hamas in Cairo. They are upset in particular about the reduced fuel supply to Gaza's only power plant. Any euphoria over news of the reconciliation in this regard has worn thin, as it appears relief may not be in sight for at least another month.

The reconciliation agreement calls for “completion of the necessary procedures to enable the consensus government to fully exercise its tasks and assume its responsibilities in the administration of both Gaza and the West Bank by Dec. 1.” The transfer of Hamas' control over Gaza, in fact, began in early October, kick-started by the movement's Sept. 17 announcement of the dissolution of the administrative committee it formed in March to oversee Gaza. Hamas took full control of Gaza in 2007 after a violent conflict there with Fatah, the main party in the Palestinian Authority (PA).

A delegation from the Ramallah-based consensus government headed by Prime Minister Rami Hamdallah arrived in Gaza on Oct. 2 after Hamas announced the demise of the administrative committee. On Oct. 3, the ministers of the consensus government began taking control of Gaza ministries from Hamas. On Nov. 1, the PA took control of the Rafah crossing with Egypt and the Erez and Kerem Shalom crossings with Israel. The Israeli crossings are expected to be opened immediately, but the crossing at Rafah will be delayed to address security issues given the Islamic State insurgency in the Sinai Peninsula.

In an Aug. 3 statement to the Quds Press International News Agency, Azzam al-Ahmad, a member of Fatah's Central Committee and the Fatah official responsible for the reconciliation file, said that dissolving the committee was necessary to end the sanctions imposed on Gaza. The Hamas administrative committee was dissolved after that statement. Many Palestinians, apparently erroneously, had assumed that relief would immediately follow dissolution.

Yahya Moussa, a Hamas leader in Khan Yunis, expressed surprise at the current situation. He told Al-Monitor, “We do not know why [Palestinian President Mahmoud] Abbas continues to impose sanctions on Gaza, even though we have dissolved the administrative committee and handed over all the ministries and crossings to the consensus government.”

He added, “The delay in removing the sanctions is unjustified. Those suffering from these sanctions are the Palestinians in Gaza, who receive electricity only four hours a day, who are prohibited from traveling and who do not have access to medical treatment abroad. Thus, the government, or Palestinian Authority, are asked to end these sanctions immediately and without delay.”

During an Oct. 3 press conference after the PA Cabinet’s first meeting in Gaza following the start of reconciliation talks, government spokesman Yousuf al-Mahmoud said, “These measures will be discussed in Cairo during the meeting of Fatah and Hamas,” referring to the gathering scheduled for the first week in December to resolve outstanding issues.

Jamal Muheisen, a member of Fatah's Central Committee, told Al-Monitor, “The measures imposed on Gaza are not sanctions, but steps for the sake of the reconciliation. The proof is that these measures succeeded in pushing Hamas toward reconciliation and toward handing over rule to the consensus government.”

Muheisen further explained, “The sanctions on Gaza have not been abolished yet given that the government has not been handed the totality of its tasks and prerogatives for the management of Gaza’s affairs. It is true that the government’s members came to Gaza, and its ministers have received their ministries in Gaza. However, the government's direct rule in Gaza will begin as soon as Hamas and Fatah resolve pending issues, namely the Gaza employees crisis, the security of Gaza and the [holding of] general [parliamentary and presidential] elections. These matters are scheduled to be discussed in the upcoming meeting that will take place in Cairo in December.”

Muheisen concluded, “We do not want to anticipate things before we see the results of the Cairo meeting, and it is not possible to address the repercussions of more than 10 years of Palestinian division in one night. Therefore, the reconciliation necessarily takes time.”

In regard to the Cairo meeting, Muheisen said, “[It] will be considered a new turn for better living standards for Gaza residents, since the government will begin to implement dozens and perhaps hundreds of development and operational projects aimed at improving life in Gaza.”

Talal Okal, a professor of political science at Al-Azhar University in Gaza, told Al-Monitor, “These sanctions [are] a power card in the hands of the Fatah movement to pressure its most prominent political rival to accept Fatah solutions to the pending issues that will be discussed at the scheduled Cairo meeting.” He emphasized, “It is clear that Fatah is trying to manipulate Hamas through its continuous sanctions in order to force it to make more concessions and show more flexibility in the scope of the unresolved issues.”

Moussa, however, dismissed the idea that Fatah is trying to “blackmail Hamas.” He said, “Reconciliation is based on partnership and cooperation, not on manipulation, blackmail or isolation of Hamas from the Palestinian scene. The relationship among partners is not based on such logic, but on the strengthening of cooperation and complementarity.”

Iyad al-Qara, the director general of the Hamas-affiliated newspaper Felesteen, told Al-Monitor that the movement is doing everything it can for the sake of reconciliation and that its leaders are making statements to indicate their flexibility in trying to resolve the existing division. Yahya Sinwar, Hamas' leader in Gaza, told representatives of trade unions on Oct. 24 that his movement has made a strategic decision to achieve reconciliation and end the Palestinian division at any cost.

According to Qara, Abbas was surprised by Hamas' willingness to dissolve the administrative committee in the hope of reconciliation and relinquish control over Gaza. Abbas' wariness about the decision may be what has led him to maintain the sanctions on Gaza until he is certain of full PA control over Gaza.

Given demands calling for sanctions to be lifted, Abbas said in an interview with the Xinhua News Agency on Oct. 23 in regard to the reconciliation, “[It] requires time and patience, and we don’t want to rush things.”

It now seems clear that the reconciliation agreement signed in October was basically a protocol, a memorandum of understanding, paving the way for the real test for the success or failure of reconciliation in December. With sanctions relief in the balance, the concern now is the possible failure of Fatah and Hamas to reach attainable solutions to their outstanding issues.