Palestinian President Mahmoud Abbas has set new conditions for reconciling with Hamas that some say could hinder the process, though others are more optimistic. 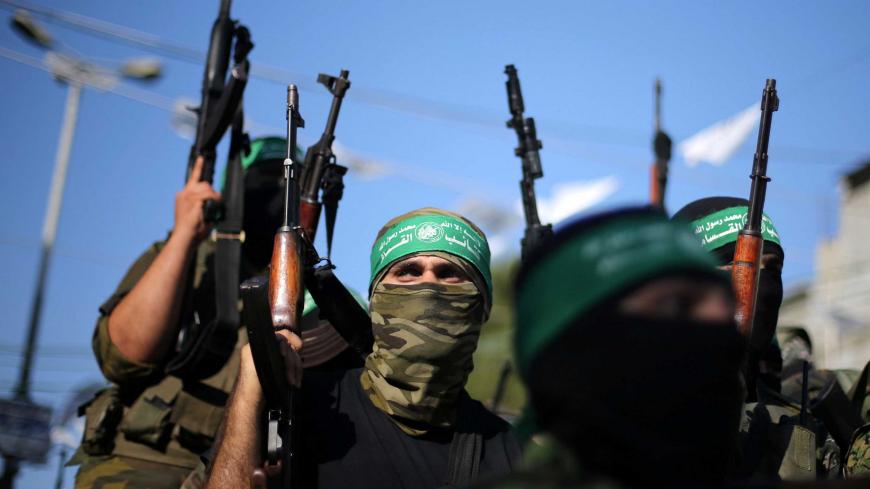 RAMALLAH, West Bank — Palestinian Prime Minister Rami Hamdallah took the first step toward assuming control of Gaza's administration when he and all the ministers of the national consensus government arrived there from Ramallah on Oct. 2.

The success of the government's visit to the Gaza Strip “will pave the way for other steps toward reconciliation," Azzam al-Ahmad, a Fatah official and member of Fatah's Central Committee, said that day during a press conference that Al-Monitor attended.

"Next week will be crucial for the effective empowerment of the government in Gaza,” Ahmad said, referring to a meeting in Cairo set for Oct. 9 between Fatah and Hamas, under the auspices of Egyptian intelligence. During the meeting, both sides are expected to place control of all ministries and crossings with the national consensus government. The remaining contentious issues will be discussed during a subsequent round of talks.

Fatah and Hamas, the two main Palestinian political parties, split violently in 2007. The Fatah-ruled Palestinian Authority (PA) administers the West Bank, while Hamas — which the United States and Israel consider a terrorist group — controlled the Gaza Strip. After suffering under ever-more-severe sanctions imposed by PA President Mahmoud Abbas, Hamas announced last month it was dissolving its administration and would be open to reuniting the parties under the PA.

Abbas said Oct. 2 that as soon as the unity government is in full control of all border crossings, security apparatuses and ministries — just as it is in the West Bank — it will lift the sanctions on Gaza, but not before. While this provoked Hamas’ condemnation, it did not affect reconciliation for now.

The next day, the Cabinet held its weekly meeting — in Gaza for the first time in years — without mention of lifting the sanctions.

The government’s visit to Gaza is one step on a long, bumpy road that Fatah and Hamas need to traverse together to achieve unity on thorny issues. Such agreements will depend on Hamas’ responsiveness to conditions Abbas has set: No state can interfere in Palestinian affairs, and any funds that enter the Gaza Strip must go through the government, which must fully govern all Gaza affairs. The thorniest issue of all involves security and weapons.

Asked who will be in charge of the security apparatus in Gaza, Abbas said everything should be in the hands of the PA, and added, “I will not accept and will not replicate the Hezbollah experience in Lebanon," meaning he refuses to have a civilian government (PA) while a political movement (Hamas) keeps an armed force.

He said the same rule will apply in both the Gaza Strip and the West Bank: Any unauthorized person carrying a weapon will be arrested. No other weapons will be allowed.

That prohibition alone could hinder reconciliation, given that Hamas and Fatah both refuse to give up their weapons, Mousa Abu Marzouk, the deputy head of Hamas' political bureau, had said in a Sept. 22 press statement.

“The resistance weapons will never be a matter of discussion,” as they belong to all Palestinian people and are a guarantee against Israeli aggression, Marzouk said.

Nabil Shaath, Abbas' foreign affairs adviser, toned down the conditions set by Abbas. He told Al-Monitor, “Everything will be discussed. Funds coming from abroad to Gaza should be monitored by a unified financial and administrative management and should be deposited into one financial account. Also, weapons should only be in the hands of the PA, and security services should follow a unified command. All of these issues will be discussed at a later stage. We are proceeding step by step.”

Fatah leader Yahya Rabah told Al-Monitor, “The government cannot be a mere formality in the Gaza Strip, and it is part of its duty to oversee all security headquarters, institutions and crossings without any kind of interference. Any money entering Gaza should go through it.”

He said, "Over the course of 10 years, Hamas failed to manage Gaza and open the crossings normally. The government will not accept being a pro forma authority without powers or influence.”

Hamas declined to comment on the conditions set by Abbas.

“The contentious issues with Fatah were agreed upon during 2011 in Cairo," Yahya Moussa, a Hamas leader, told Al-Monitor. "We will not comment on any conditions or analyses circulated by the media.”

The most important points agreed to in 2011 were security, forming a unified framework for the PLO to discuss its reform, activating the Palestinian Legislative Council one month after signing the Beach Refugee Camp Agreement, integrating the staff Hamas appointed after 2007 with the PA and government officials, and forming the Hamas-Fatah national consensus government.

Moussa added, “We are going to Cairo to arrange mechanisms to implement the 2011 agreement, knowing that this agreement stipulated that security coordination with Israel was rejected altogether, and the resistance in Gaza is protected by all factions. We are in the stage of national liberation.”

The PA currently coordinates security of the West Bank with Israel, which Hamas rejects.

Asked about the impact Abbas' new conditions will have on the reconciliation process, political analyst Jehad Harb of the Palestinian Center for Policy and Survey Research told Al-Monitor, “There are no red lines in politics. Everything is subject to discussion and depends on the prevailing conditions and the parties sponsoring reconciliation. For example, Hamas could abandon [former Fatah senior official Mohammed] Dahlan's understandings or foreign support if the government provided favorable conditions to end the economic crisis in Gaza — but [Hamas] will not give up its weapons.”

However, as Al-Monitor's Shlomi Eldar reported Oct. 6, there might be some reason for optimism. Al-Monitor learned from sources in Gaza close to Dahlan's people that Egypt has proposed a compromise involving creation of a joint security council for the Gaza Strip.