Hamas sources are talking about a possible alliance with Mohammed Dahlan, President Mahmoud Abbas’ rival, who might harm the Fatah-Hamas reconciliation. 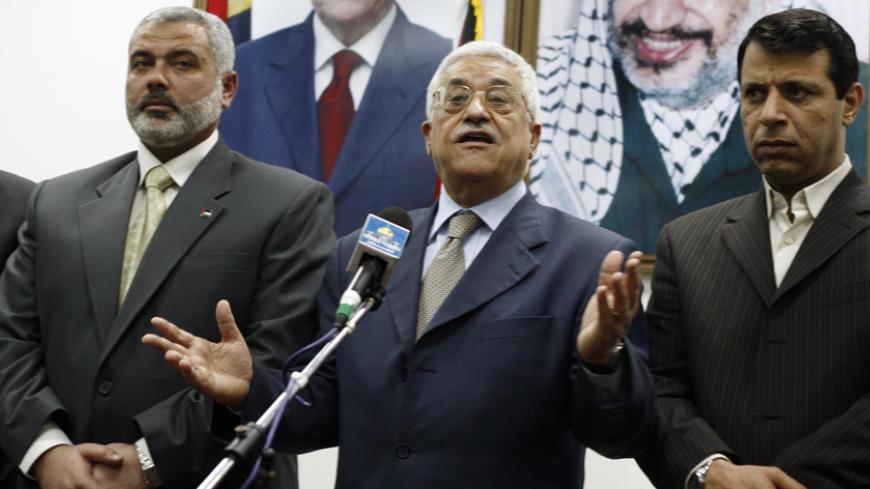 These days, alliances previously excluded from the realm of possibility might in fact be established, as shown by the mutual gradual courting between Hamas and President Mahmoud Abbas’ archenemy Mohammed Dahlan, who had been dismissed from Fatah.

Hamas spokesman Salah Bardawil confirmed Oct. 27 that the movement is willing to talk with Dahlan after the completion of the reconciliation. According to Bardawil, social reconciliation erases the past and Hamas does not mind holding dialogues with any Palestinian regardless of his past, away from the internal disputes witnessed by Fatah.

Yahya Moussa, a Hamas leader and chairman of the Legislative Council’s Oversight Committee, told Al-Monitor, “Dahlan’s past is better than Abbas’ present, who is managing the Palestinian situation in a spirit of defeat and failure. Abbas’ settlement with Israel only brought more Judaization and land expropriation in the West Bank.”

These statements by Hamas led to a harsh response by Osama Qawasmi, a Fatah spokesman in the West Bank. Qawasmi stated Oct. 28 that they reflect a lack of national responsibility and affect the implementation of the reconciliation and the achievement of national unity.

For his part, Fatah leader in Gaza Salah Abu Khatleh said Oct. 27 that Hamas' statements aim to put pressure on Abbas to offer concessions to the movement. He added that Hamas is trying to exploit the internal disputes in Fatah, saying that reconciliation with Dahlan will not serve the national unity, the continuation of the Hamas-Fatah reconciliation and the success of the consensus government.

Abdullah Abdullah, a member of Fatah’s Revolutionary Council, told Al-Monitor that Dahlan is outside Fatah’s circle and the decision to dismiss him is final and irreversible.

Ahmed Youssef, former political adviser to former Hamas Prime Minister Ismail Haniyeh, told Al-Monitor, “The Dahlan option aims to fill the existing political vacuum. This will be done through the formation of an alliance that brings together all national and Islamic forces within the framework of a political partnership, without excluding anyone, to manage the affairs of the Gaza Strip. This includes the pro-Dahlan Fatah movement, since Dahlan enjoys strength and influence in Gaza and a prominent regional presence. It should be noted that the attempts to oust him from the organizational and national scene have failed.”

Sufian Abu Zaida, a prominent Fatah leader in Gaza who is close to Dahlan, published an article on Oct. 23 stating that Hamas’ hints at dialogue with Dahlan aim to put pressure on Abbas or prepare its members for changes in local and regional relationships, including the relationship with Dahlan. Yet, it is certain that there is a debate at the highest ranks in Hamas about a reconciliation with Dahlan, to open a new page with him and forget about the painful past.

An official source at the Interior Ministry in Gaza who preferred to remain anonymous told Al-Monitor, “Hamas is allowing charitable organizations close to Dahlan to freely practice their activities in Gaza. The Palestinian Center for Human Perseverance (FATA) headed by Dahlan's wife, is at the forefront of these organizations, and it provides financial and in-kind aid in different areas of the Gaza Strip.”

According to information obtained by Al-Monitor from a source close to Dahlan who requested anonymity, the new development in the Hamas-Dahlan rapprochement is that Fatah leader Marwan Barghouti — who is serving multiple life sentences in Israeli prisons — gave his blessing to this rapprochement. The source said, “Dahlan knows that Barghouti is popular among Hamas circles and that he may be nominated as a candidate mutually agreed upon by him [Dahlan] and Hamas in the upcoming presidential election.”

For her part, Barghouti’s wife Fadwa Barghouti, who is a member of Fatah’s Revolutionary Council, told Al-Monitor in a telephone interview from Ramallah, “Marwan has been under collective isolation in Israeli jails for 13 years, and he is not allowed to receive visits by political figures by virtue of an Israeli decision. However, he will not accept to be part of the existing disputes on the Palestinian scene. He is the people’s safety valve and he deploys efforts to bridge the gap between the different parties and to promote national unity as a law for oppressed people to achieve victory.”

She said, “Marwan does not support a specific party against another in the Palestinian arena, but the fact that everyone is talking about him reflects the need for his presence among us.”

Moussa told Al-Monitor, “It is necessary for Hamas at this stage to mobilize the national ranks by forming an alliance with a team from Fatah. Hamas must create a new polarization situation in the Palestinian arena beyond Abbas, who became a burden on the Palestinian national movement. The movement should put forward a political project agreed upon by everyone, since there is no future for a partnership with any movement led by Abbas.”

He added, “Hamas knows that Fatah’s organizational rules and members are siding with Dahlan, and it must meet with them in order to unify the national movement in Palestine and create a new political movement.” It is worth mentioning that despite the positive signs issued by Hamas circles, Hamas has yet to issue a statement about this rapprochement.

A senior Hamas official, who preferred to remain anonymous, told Al-Monitor, “A rapprochement with Dahlan has not been formally approved by the movement. We respect the personal opinions expressed from time to time, but these do not bind the leadership. This issue is not easy, as its repercussions will be very costly for Palestinians. A rapprochement with Dahlan means a breakup with Abbas. Are we ready for this?”

He added, “No consensus has been reached yet within Hamas’ leadership circles on a rapprochement with Dahlan, although this remains a viable option. However, Hamas may resort to such rapprochement if a final reconciliation with Abbas’ team fails. In this case, we can look for other options in the best interest of the Palestinian people. I think we have not yet reached such a dangerous stage.”