The Palestinian Authority's move to cut a chunk out of its Gaza employees’ salaries is being met with anger amid concerns that the real motive behind the decision is more political than financial. 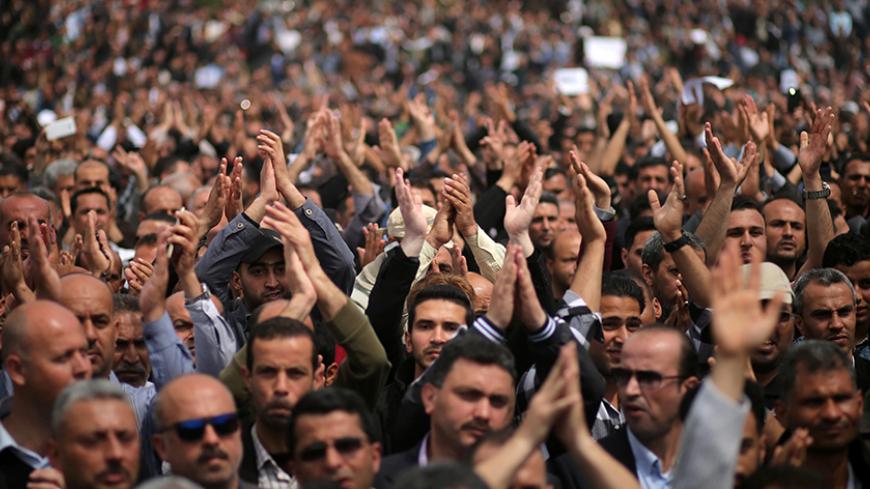 Palestinian Authority employees take part in a protest against what they say are deductions in their salaries, in Gaza City, Gaza, April 8, 2017. - REUTERS/Mohammed Salem

RAMALLAH, West Bank — Tens of thousands of protesters took to the streets recently to decry a Palestinian Authority (PA) decision to slash its employees’ salaries in the Gaza Strip by 30-50%. The move is prompting a meeting that could change the relationship between PA rival political parties Hamas and Fatah — for better or worse.

The PA government, based in Ramallah, did not call for cuts to its West Bank employees' salaries.

An estimated 58,000 civil servants worked at public Gaza institutions before Hamas came to power in Gaza in 2007, when the Hamas-Fatah rivalry divided the PA. At that time, the PA ordered its Gaza employees to stop going to work amid a state of chaos that plagued the Strip and the violence that erupted between both sides. This led Hamas to appoint its own civil servants there to run the ministries. Meanwhile, the PA has continued to pay its employees' salaries all these years despite them not working.

In a statement, the PA sought to justify the drastic cuts as "the result of the financial siege imposed on the PA,” referring to a significant decrease of international aid from donor countries, and Israeli restrictions. The statement went on to explain the political motives behind its decision, namely the Hamas "rebellion against the Constitutional Court established by President Mahmoud Abbas and activation of the administrative committee to operate in the Gaza Strip as an alternative to the government.” (The Gaza Administrative Court on March 23 had overturned Abbas’ decision to form the first Palestinian Supreme Constitutional Court since the PA was established. The court's move showed that Hamas doesn't recognize Abbas’ authority.)

The PA's statement added, “Hamas continued to collect government revenues and keep them to itself instead of sending them to the treasury, which reflected negatively on the PA’s finances.”

Abbas, in an interview April 3 with al-Quds al-Arabi newspaper, threatened that the Fatah-led PA, which administers the West Bank, "will take unprecedented measures against Hamas if it carries on with the decision to form the committee.” But the administrative committee was approved by the Palestinian Legislative Council in Gaza on April 16 and subsequently drew fire from the PA.

Speaking on condition of anonymity, a Hamas source told Al-Monitor that Abbas instructed the government to impose pay cuts on civil servants in the Gaza Strip in response to Hamas’ measures. “The president’s decision aims to pressure Hamas into backing down on its latest measures.”

Hamas responded in an April 11 statement. Ismail Haniyeh, deputy chairman of Hamas' political bureau, said the government’s decision “is a dangerous political step" designed to separate Palestinians in the Gaza Strip and the West Bank.

Hamas leader Yahya Moussa told Al-Monitor, “The salary cut is an unethical and anti-nationalist move by the PA. It is also dangerous because it divides the Palestinian people and will lead to the separation of the West Bank from Gaza.” The decision is “an attempt to pressure Hamas into accepting political projects planned by President Abbas.”

Kayed al-Ghul, a member of the Popular Front for the Liberation of Palestine's political bureau, told Al-Monitor that despite the PA's effort to put some of the blame on a financial crisis, “the government’s decision is politically motivated. It came in reaction to Hamas’ creation of the administrative bureau to run the Gaza Strip."

He added, “The decision aims to put pressure on Hamas because the government understands that salaries are the … vital engine of the economy. The decision would lead to a socioeconomic crisis with repercussions on Hamas.” Ghul argued, “The government is wrong to think that salary cuts can pressure Hamas. This explains the employees’ anger with the government and the PA."

Ibrahim Abrash, a writer, political analyst and political science professor at Al-Azhar University, considers the salary deduction part of the internal political struggle, aiming to put pressure on Hamas, which is currently running the Gaza Strip.

As for the government’s ability to pressure Hamas, Abrash said, “The fact that the PA did not offer any clarifications to the employees as to why it made such a decision would put the PA, not Hamas, in a difficult situation.” He was referring to the government's selective decision to target Gaza employees and not PA employees in the West Bank.

Although there is a consensus that the government’s decision is a political one, the move seems to be the first step taken by the PA in its effort to end Hamas control in the Gaza Strip. In line with this decision, Fatah’s Central Committee on April 8 formed a six-member committee headed by Fatah’s deputy leader, Mahmoud al-Aloul. The committee is slated to visit the Gaza Strip in the next few days to meet with Hamas, hoping to reach a clear understanding and find a final solution for the Strip’s problems.

Fayez Abu Aita, Fatah’s spokesman and deputy secretary-general of its Revolutionary Council, told Al-Monitor, “The committee, which is expected to visit Gaza in the coming days, seeks to obtain clear and honest responses from Hamas concerning the party’s readiness to implement the previous mutual agreements [between Fatah and Hamas] and abolish the measures it had taken [in reference to Gaza’s administrative committee], so that the Palestinian government can operate in the Gaza Strip.”

The Saudi Elaph website indicated April 10 that Abbas has laid out five conditions to discuss with Hamas for approval or rejection. The conditions are: Dissolve the recently established administrative committee; hand over the administration of border crossings and ministries to the consensus government headed by Hamdallah and enable its work; hold legislative and presidential elections; abolish all the decisions adopted by Hamas lawmakers in Gaza; and commit to the Qatari initiative items stipulating the establishment of a national unity government. The Qatari initiative proposed ways to solve the problems related to the reconciliation, namely those related to the Gaza employees appointed by Hamas following the division, activating the Palestinian Legislative Council and holding a session with the presence of all parliament members, and forming a government of national unity to pave the way for elections.

With regard to the Fatah committee’s visit to Gaza and the items to be presented, Moussa said, “Let President Abbas keep those conditions to himself, as he is never sure about anything. He must understand one thing, which is not to address Gaza with conditions.”

The PA’s decision to cut its civil servants’ salaries was just the first reaction to Hamas’ creation of the administrative committee to run the Gaza Strip. This move was followed by the decision of Fatah’s Central Committee to send a delegation to Gaza, exposing the Hamas-Fatah relations to different narratives, such as ending the 10-year division, turning the division into a separation or keeping the situation as it is. The upcoming days should bear the answer.