Intra-Palestinian rift keeps widening with no end in sight

Amid reports that local and international mediators are shuttling between the Gaza Strip and Ramallah to end the dispute, it seems Fatah will not yield until Hamas meets all of its demands. 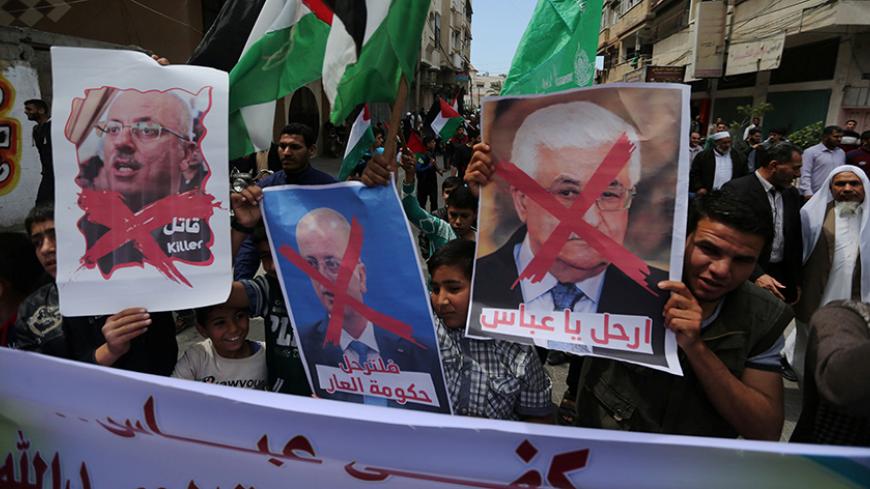 Hamas supporters hold posters with X's over images of Palestinian President Mahmoud Abbas and Palestinian Prime Minister Rami Hamdallah during a protest against them in Khan Yunis in the southern Gaza Strip, April 14, 2017.

President Mahmoud Abbas has been sending local and international mediators to Gaza to discuss a range of issues that would achieve reconciliation, Hamas leader Yahya Moussa revealed to Al-Monitor. Abbas’ efforts come following the rapprochement that began taking shape between Hamas and Egypt, and seem to be aimed at undermining the understandings the movement reached with dismissed Fatah leader Mohammed Dahlan, according to Moussa.

The internal crisis between the Palestinian Authority (PA) and Fatah on the one hand and Hamas on the other has worsened since Hamas formed the administrative committee to manage the Gaza Strip instead of the national consensus government, amid bleak reconciliation prospects. Consequently, the PA took a series of measures against Gaza, including cutting off the Gaza employees’ salaries and forcing them to retire early. The PA also stopped covering the bills for electricity supplied by Israel to the Gaza Strip. This pushed Hamas in June to conclude deals with Dahlan, under Egyptian sponsorship, to alleviate Gaza’s crises.

Moussa said that international parties, including United Nations Middle East envoy Nickolay Mladenov, who visited Gaza at the end of June and early July, and Fatah leaders in Gaza offered their mediation and transferred messages between Hamas and Abbas to settle their differences and revive the Palestinian reconciliation. The Fatah delegation discussed during its June visit to Gaza ways to end the growing rift between Hamas and the PA, but their efforts have failed so far because each party is insisting on its demands.

He noted, “The mediators communicated Abbas’ conditions for reconciliation,” which include Hamas disbanding the administrative committee, empowering the consensus government to work in Gaza without any restrictions and holding presidential and legislative elections within six months. Moussa clarified that Hamas told the mediators it would not discuss any conditions or details before the PA lifts all its measures against the Gaza Strip.

Mladenov visited the Gaza Strip twice in less than a week: on June 29, when he carried suggestions and messages to Hamas from Palestinian officials, and on July 3, to get answers about the suggestions related to the reconciliation and the PA’s measures in Gaza.

Moussa did not rule out the possibility that Abbas’ mediation aims at “disrupting the openness between Hamas and Egypt and blocking the road to understandings with the Dahlan-led reformist current in Fatah. Abbas is worried about this rapprochement and wants to foil it.” He added, "Several Fatah leaders showed resentment and criticized Egypt after loosening its blockade and allowing entry of industrial diesel to the Gaza Strip.”

He added, “The understandings between Hamas and Dahlan’s current are putting off Abbas and Fatah, and he is doing his best to stand in the way. Abbas thought that such understandings would never happen and he was shocked to see otherwise, and started taking action to foil them.”

In a July 13 press statement, member of Hamas’ political bureau Mahmoud al-Zahar said that Abbas wants to impede Hamas’ understandings with Cairo through maneuvering. Zahar said, “The understandings between Hamas and Dahlan focus on three issues, namely activating the Palestinian Legislative Council, settling the social reconciliation issue by giving compensations to families of those killed in the 2007 clashes and activating the National Islamic Committee for Social Solidarity and the projects for the poor.”

The committee, established by Dahlan’s reformist current in 2014, aims at proposing small projects to poor families to provide them with a constant source of income that they can live off through sums of money donated from several Arab countries.

Yet Azzam al-Ahmad, a member of Fatah’s Central Committee who is in charge of the reconciliation file with Hamas, disputed Moussa's claim. “It's not true that mediators have been sent to Hamas. During his visit to Tunisia on July 6, Abbas denied this and said that there is no mediation with Hamas and that he would never accept it," Ahmad told Al-Monitor.

He added, “Hamas asked Mladenov to step in, but we refused.” Abbas and Maldenov met on June 22, a week before he went to Gaza, and Abbas talked about his vision for the Palestinian reconciliation. “In April, the PA sent a written document to Hamas with clear demands to end the rift. The demands included disbanding the administrative committee, allowing the national consensus government to operate in Gaza and holding elections.”

The Hamas-Dahlan understandings have raised the ire of Fatah. In a July 1 press statement, official Fatah spokesman Osama al-Qawasmi said, “The understandings are illegitimate and are paving the way for separating the Gaza Strip, which is in line with Israel’s goals.” Still, the PA and Fatah are steering clear of criticizing Egypt, which brokered the understandings.

In a July 12 press statement, Qawasmi said that Egyptian President Abdel Fattah al-Sisi told Abbas during their meeting July 9 in Cairo that “Egypt prioritizes the legitimate Palestinian government, that its loose grip in Gaza is motivated by humanitarian reasons only and that it will not allow the Gaza Strip to separate [from the rest of the Palestinian territories].”

Abbas’ adviser Mahmoud al-Habbash told Al-Monitor, “The PA did not and will not shut the door in the face of any party willing to mediate to end the rift. But Hamas must abide by the pillars of ending the rift. Our demands are clear, and Abbas’ initiative represents them.”

Habbash commented on the recent Hamas-Egypt rapprochement, saying, “The only legitimate representative of the Palestinian people is the PLO. We trust the Egyptian stance, and we are not worried about Egypt’s policies toward Gaza. Our relations with Egypt are tight.”

Habbash noted that the Palestinian leadership is not interested in the Hamas-Dahlan understandings. He said, “We do not care about that, and this point is not even on the PA’s agenda of discussions.”

Amid the PA’s insistence on its demands to end the rift as per Abbas’ initiative and Hamas’ calls for the PA to lift all sanctions on the Gaza Strip as a prelude to discussing the reconciliation conditions and measures, it seems all mediations will have been in vain. The rift seems to be widening between the West Bank and the Gaza Strip with each passing day.