Hamas’ political bureau member and the Patriots to End the Split announced two similar initiatives to end the Palestinian division, which some say are not enough to solve the internal dispute between Hamas and Fatah in the near future. 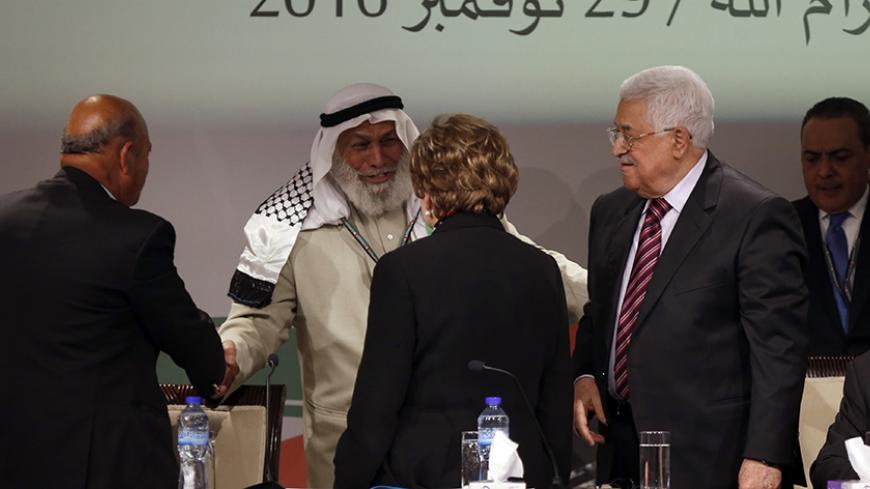 GAZA CITY, Gaza Strip — Within the span of some 12 hours on Aug. 3, Hamas in Gaza and the Patriots to End the Split and Restore the National Unity in the West Bank independently launched two initiatives to end the political and administrative division between Gaza and the West Bank resulting from the Hamas-Fatah feud.

Salah al-Bardawil from Hamas’ political bureau announced his movement's initiative in a press statement. The proposal includes seven key points, most notably the movement’s readiness to dissolve the administrative committee, set up in March by Hamas to manage Gaza affairs after the movement concluded that the government of national unity would not take responsibility for Gaza's administration. Hamas also stressed the need for President Mahmoud Abbas to reverse measures imposed against Gaza since mid-April to force the movement to dissolve the committee. Abbas ordered cuts in electricity being supplied to Gaza by Israel, forced early retirement of government employees in Gaza, implemented cuts in social allowances and other measures.

Hamas wants the consensus government agreed to in 2014 to fulfill its obligations toward Gaza and for all the Palestinian factions, not just Fatah and itself, to come together to reach agreement on forming a true government of national unity. It also called for reconvening the Palestinian Legislative Council (PLC), which has been suspended since 2007 due to the political division. In addition, the initiative renewed a call to prepare for legislative, presidential and Palestinian National Council (PNC) elections and to hold a meeting of the Temporary Leadership Framework of the Palestine Liberation Organization (PLO) — established in 2011 by the 2005 Cairo agreement, but never activated — so all the factions, including Hamas, can participate in making decisions on such issues as political negotiations and security cooperation with Israel.

A few hours after Bardawil's announcement, the Patriots to End the Split launched its own initiative, the Jerusalem Appeal, at a press conference in Ramallah. The group was formed in 2016 by independent Palestinians as well as some from civil society and women's institutions to pressure Hamas and Fatah into reconciling. Some 200 figures signed its proposal, including factional leaders from the Palestinian People's Party, the Palestinian National Initiative, the Democratic Front for the Liberation of Palestine, members of the PLC (including from Hamas and Fatah), and civil society and women's organizations.

The Patriots' initiatives includes calling on Hamas and the Palestinian Authority (PA) to act in a way that results in the immediate dissolution of the administrative committee in Gaza and demanding that Abbas reverse the recent measures he took against Gaza. The other items are for Abbas to swiftly begin forming another national unity government, prepare for presidential, legislative and PNC elections, and work to strengthen the steadfastness of the Palestinian people, lift the siege of Gaza and allow PA government institutions to resume operations in Gaza.

Mustafa Barghouti, secretary-general of the Palestinian National Initiative, helped prepare the Patriots' proposal. He told Al-Monitor that the goal behind the initiative is to take advantage of the popular unity generated in the recent controversy involving Al-Aqsa Mosque and East Jerusalem.

He revealed that copies of the initiative’s text had been delivered to Abbas and PNC Speaker Salim al-Zanoun as well as Fatah and Hamas for review and comments. Barghouti had hoped they would receive a quick response, in light of the deteriorating situation, but neither Hamas nor Fatah has yet replied.

Jamal Muheisen, a member of Fatah's Central Committee and a close associate of Abbas, told Al-Monitor, “We welcome any initiative aimed at ending the division. The president had put forward an initiative called Al-Aqsa Appeal on July 21 during a speech he gave following the escalation of the Jerusalem events. However, it was not widely covered in the media as more heated developments were taking place back then. Abbas’ initiative is based on dissolving the administrative committee in Gaza, enabling a government of national consensus to work in Gaza, holding legislative and presidential elections, and reversing the measures he took against the Strip. This was the initiative proposed on our part for reconciliation.”

Muheisen said that the Hamas leadership in Gaza has not been receptive of the president’s proposal, charging that the movement is promoting its readiness to dissolve the administrative committee, but it is only for show. He asserted that a Hamas delegation that visited Abbas on Aug. 1 also stressed the need to dissolve the administrative committee if the president agrees to revoke all measures taken against Gaza, but he emphasized that promises need to be implemented.

Akram Atallah, a political analyst who writes for the Palestinian daily al-Ayyam, said that the recent initiatives were made after the Palestinian factions finally felt the depth of the crisis under which the Palestinian people were suffering and realized the urgent need to end the division, especially given the unity shown by Palestinians against Israeli actions at Al-Aqsa Mosque in July. Attallah emphasized to Al-Monitor that both Hamas and Fatah accepting these initiatives remains a wish yet to be realized. Each party continues to make press statements holding the other responsible for the division persisting.

Mukhaimer Abu Saada, a professor of political science at Al-Azhar University in Gaza, said that the distrust between Fatah and Hamas and their questioning of the other’s intentions when it comes to a reconciliation is the main reason why they have not yet reached a final agreement, reconciled, or implemented previous agreements. He believes the real issue is not the content of the initiatives put forward so far, but the rival parties’ true intentions. Abu Saada told Al-Monitor that each party has tried and continues to try to propose an initiative to end the division but with the goal that the other party simply accepts it. He believes a successful reconciliation is highly unlikely in the near future, and the conflict will continue with the possibility of Abbas ordering even more punitive measures against Gaza.

Although the majority of the Palestinian factions welcomed the most recent initiatives, their relatively weak positions render them unable to mount the pressure needed to push Fatah and Hamas to end the division.