Is Hamas-Fatah reconciliation finally on track?

Palestinian President Mahmoud Abbas has presented his vision to end the split between Fatah and Hamas and have the consensus government take control in Gaza, threatening to take "unprecedented" action if Hamas rejects his demands. 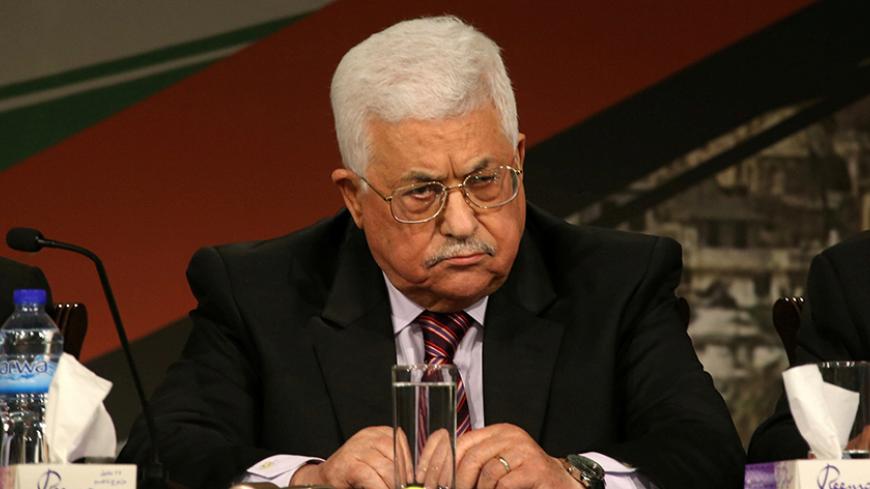 Although on April 16 Hamas refused to meet with Fatah without the presence of all Palestinian factions, the bilateral meeting took place. Fatah announced April 11 that a high-level delegation would meet with Hamas. The delegation, however, was reduced to two members of the Central Committee instead of six, and Fatah refrained from giving any justification.

Abu Eita explained that Hamas welcomed the idea for the consensus government to take over the administration of the Gaza Strip and told the Fatah delegation to consider the administrative committee dissolved once the government sets up in Gaza. At the end of the meeting, Hamas promised to deliver its response in writing to Fatah’s Central Committee member Azzam al-Ahmad, who is in charge of the reconciliation dossier, within a week.

Prior to the meeting, senior Hamas official Khalil al-Hayya said at an April 17 press conference in Gaza City that Hamas agrees to elect the National Council, hold presidential and legislative elections in three months and enable the national consensus government to work freely in the Gaza Strip.

Salah al-Bardawil, a member of Hamas' political bureau, told Al-Aqsa Voice April 19 that it was a positive meeting during which both sides raised important issues and paved the way for Palestinian reconciliation by enabling the consensus government to manage the Gaza Strip.

Bardawil said, “We agreed with the Fatah delegation that the consensus government take over governance of the Gaza Strip, and that the administrative committee … steps aside once the government takes over its full functions.”

Bardawil explained that Hamas expressed to Fatah’s delegation its desire that measures be taken to pave the way for the consensus government to set up operations. These measures include stopping the blue tax on industrial diesel fuel to restore electricity services in Gaza, Bardawil said. He added that the sides also agreed that civil servants in the Strip will obtain the remaining 30% deducted from their salaries April 4, and denied that Fatah’s delegation gave Hamas a one-week time limit to respond to Abbas' message.

Addressing the Palestinian Ambassadors to Arab and Islamic Countries Conference held April 12 in Manama, Bahrain, Abbas warned that “unprecedented” measures will be taken to address the Palestinian split in the coming days. Hamas rejected his warning and organized marches April 15, 17, 18 and 20 in the Gaza Strip repudiating “Abbas' conspiracy against Gaza.”

Akram Atallah, a political analyst and writer for Palestinian daily Al-Ayyam, told Al-Monitor that tepid Hamas-Fatah ties prompted Fatah to reduce the number of delegates from six to two and limit the delegation’s task to the delivery of Abbas' message. He pointed out that the current state of relations between the two sides are negatively affecting the Gaza Strip and exacerbating its crises.

Atallah anticipated that Abbas' "unprecedented" measures would target the electricity, health and other Gaza sectors that are subsidized by the Palestinian government to pressure Hamas. He said that the escalatory measures have followed Abbas' return from the Arab Summit in Amman and that Abbas was likely pressured to gain control of the Gaza Strip to prove his ability to continue to lead the PA.

Tayseer Muheisen, professor of international relations at the Islamic University in Gaza, told Al-Monitor, “Abbas is well aware of the regional and international changes, more precisely that Donald Trump is now the US president and intends to implement an initiative rather than promote negotiations to resolve the Israeli-Palestinian conflict, the application of which requires that Abbas hold the reins in all Palestinian territories, particularly the Hamas-run Gaza Strip.”

He explained that Abbas is convinced that failing to seize control over Gaza will negatively affect his legitimacy in the eyes of the international community.

Israel's Walla reported April 25 that Abbas' next measures would consist of halting the Palestinian governments' payments to some Gazan institutions and refraining from paying Gaza civil servants their salaries. Previously, the government refused to exempt Gaza from the blue tax and withheld the operational budgets of the Hamas-run ministries in Gaza.

Muheisen believes that the situation in Gaza is more likely to worsen due to tense Fatah-Hamas ties, and this is why Hamas contained Abbas' resentment and prevented him from meeting with Fatah and other factions at a proposed meeting April 12, where Hamas could share its stance toward Abbas' demands, especially in terms of the administrative committee, the consensus government, electing the National Council, and holding presidential and legislative elections.

Abbas and Hamas are likely to continue to reject the other's conditions for reconciliation, and Gaza's citizens are well aware that they are the ones paying the cost.