Will Abbas go through with legislative elections without Hamas?

Palestinian President Mahmoud Abbas plans to hold legislative elections within six months, the first since the last Palestinian parliamentary elections in 2006, to the dismay of Hamas. 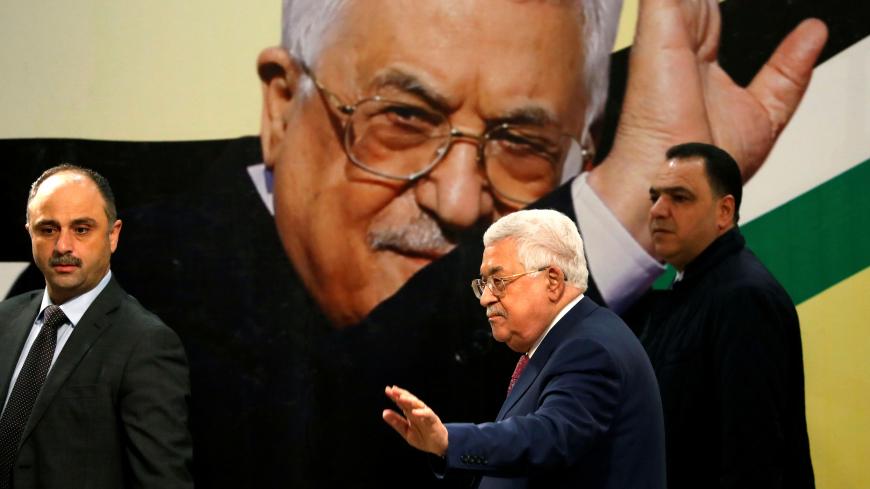 GAZA CITY, Gaza Strip — Palestinian President Mahmoud Abbas plans to hold legislative elections within six months, the first since the last Palestinian parliamentary elections in 2006. This comes in accordance with the decision of the Constitutional Court, which Abbas announced Dec. 22 during the meeting of the PLO Executive Committee, providing for the dissolution of the Palestinian Legislative Council (PLC) and the holding of elections.

In a Dec. 23 statement, Hamas, which won a landslide victory in the 2006 elections, rejected the court’s decision, condemning it as “worthless.”

Hamas’ military takeover of the Gaza Strip in June 2007 led to the PLC disruption, which stopped convening throughout its four-year legal and constitutional mandate that ended on Jan. 25, 2010. After that, the PLC remained disrupted and no new elections were held because of the ongoing Palestinian division.

On Dec. 24, Abbas met with head of the Central Elections Committee Hanna Nasser at the presidential palace in Ramallah to discuss the implementation of the decision to hold the legislative elections.

“Fatah is committed to implementing the court’s decision to hold legislative elections, even if Hamas rejects them,” Jamal Muhaisen, a Fatah Central Committee member, told Al-Monitor.

“But if Hamas wanted to stand its ground, there will be alternative electoral mechanisms for the ballot box,” Muhaisen said, without giving any further explanation.

Meanwhile, Hamas leader Yahya Moussa told Al-Monitor that Hamas rejects Abbas' invitation to hold the legislative elections within six months, stressing that his movement is ready to hold general elections for the presidency, the PLC and the National Council (PLO parliament), all in tandem and within a national consensus.

He explained that Abbas’ call to hold elections within six months “paves the way for the secession between the West Bank and the Gaza Strip, which is in violation of the reconciliation agreement signed between Fatah and Hamas on April 23, 2014, in Gaza City. The agreement provided for the resumption of the legislative council meetings and sessions and for holding general elections, not only legislative.”

Moussa called upon Egypt, being the sponsor of the reconciliation agreement, to intervene immediately and stop Abbas’ “unilateral measures.”

“The reconciliation agreement has reached a dead end. For Fatah, reconciliation means one rule, one law, one government and one security man, which Hamas rejects and demands the sharing of roles instead. This is in direct conflict with the concept of an independent state,” Muhaisen said.

The Palestinian reconciliation dossier has been in a stalemate, despite the great efforts made by Egypt over the past years to achieve reconciliation. Fatah has been calling upon Hamas to hand over Gaza and allow the consensus government headed by Rami Hamdallah to assume its responsibilities in the Gaza Strip.

Hamas, however, has a prerequisite for that, which is to have its employees that were appointed following the 2007 division work in the financial and administrative departments of the Palestinian Authority (PA), a condition that Abbas has rejected.

Muhaisen stressed that holding elections is the only way out of the Palestinian division stalemate.

“The democratic right of people to choose their leaders and representatives has been suspended since 2006,” he added.

Qais Abdel Karim, member of the Democratic Front for the Liberation of Palestine and member of the PLC, told Al-Monitor, “We agreed to Abbas’ invitation to hold the legislative elections and we are ready to participate in them, despite our reservations on the Constitution Court’s decision to dissolve the PLC.”

“In the absence of any real way out for the Palestinian stalemate, we believe our only exit is to hold elections,” he added.

Abdel Karim believes that it is necessary that all political forces participate in the elections, calling on Hamas and Fatah as well as other factions to hold a serious dialogue to discuss the possibility of holding elections with the participation of all.

Mustafa al-Sawaf, a writer in the Hamas-affiliated local Felesteen newspaper, told Al-Monitor, “Hamas will stand its ground and will not allow the elections in the Gaza Strip in light of the ongoing Palestinian division.”

Sawaf deemed the elections to be a failure if they took place without a Palestinian consensus and without the participation of Hamas.

“If Abbas decided to go through with this decision albeit without consensus, this means a political separation between the Gaza Strip and the West Bank,” he added.

Mukhaimer Abu Saada, a professor of political science at Al-Azhar University in Gaza, told Al-Monitor, “There are two possible scenarios for holding the elections within six months. First, Abbas would go for conducting the elections in the West Bank without the Gaza Strip if Hamas did not yield, which practically means a major rift in the Palestinian state.”

“Or Hamas would have a change of heart and take on the challenge of participating in the elections. In this case, however, I believe Abbas will not be as serious about holding the elections for fear of their results. Because the latest poll suggests that Hamas remains very popular among the Palestinians, which could mean that it might win the elections one more time,” Abu Saada said.

He added, “If the second scenario would play out, I believe Abbas would postpone the elections under the pretext that they cannot be held in the Hamas-controlled Gaza Strip.”

A poll conducted by the Ramallah-based Palestinian Center for Policy and Survey Research published Dec. 27, 2018, on the Palestinians’ preferences of a new president if Abbas and Hamas leader Ismail Haniyeh were to run, showed that Abbas would have 42% of the votes and Haniyeh 49%, compared to 47% for Abbas and 45% for Haniyeh three months ago, according to the same poll.

According to the poll, if new parliamentary elections were to be held, the turnout would be 69%, with 34% of votes for Hamas and 35% for Fatah, compared to 27% for Hamas three months ago.

“I think that Hamas will insist on refusing the legislative elections because agreeing to hold them without the presidential elections means accepting Abbas as the president of the PA and the court’s decision to dissolve the PLC,” Abu Saada concluded.