Abbas rallies election support, with or without Hamas

The Arab League has announced its backing for Palestinian legislative elections, as Hamas and Fatah remain divided over them. 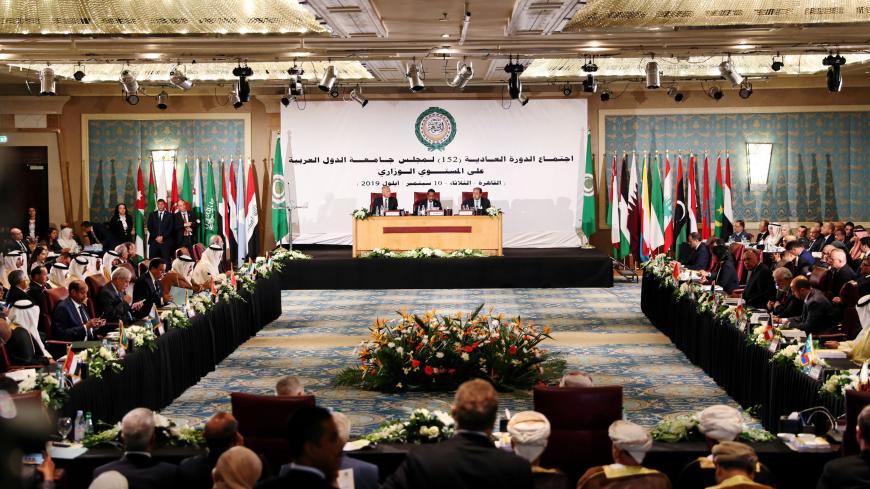 Fatah, Hamas and most, if not all, of the Arab world believe elections are due in the Palestinian territories. They just can't agree on when they should be held.

"We do not want fragmented and selective elections," Mushir al-Masri, a senior Hamas official, said in a press statement Oct. 10. "We want to hold simultaneous presidential and legislative elections on the same day."

Some critics question whether Abbas will ever allow another presidential election. At 83, he wants to remain in office.

The last presidential election was held Jan. 9, 2005, and legislative elections came a year later. Abbas’ mandate ended in 2009 and the Palestinian Legislative Council’s in 2010. Elections haven't been held since the Palestinian split between Fatah and Hamas in 2007. As the headline of a Council on Foreign Relations opinion piece in January read, "Abbas Celebrates 14th Anniversary of His Four-Year Term."

Abbas made sure the elections issue gained international attention during his Sept. 26 speech at the United Nations, where he called for voting to take place in Jerusalem, the West Bank and Gaza Strip. He accused Hamas of obstructing elections since it took over Gaza in 2007, and he urged the UN and international bodies to supervise the next elections.

With the issue now on the world stage, a Palestinian official close to Abbas told Al-Monitor on condition of anonymity, “The Palestinian situation is part of the Arab system, and our Arab brothers have the right to express their views on the election issue, if we ask them to do so.”

On Oct. 7, PLO Executive Committee Secretary-General Saeb Erekat also called on the UN to support efforts to hold the elections. Also that day, Palestinian Social Development Minister Ahmed Majdalani told Al-Monitor that the Palestinian Authority (PA) plans to use Arab, regional and international parties to pressure anyone who might obstruct voting.

On the other side, Hamas leaders and members fell in line to support elections while opposing Abbas' order to separate the elections.

“Hamas welcomes any Arab effort to help hold legislative and presidential elections. The Arab League's assistance in holding general elections is welcome, but the PA is required to implement the general election law and take into account national consensus throughout the electoral process," he told Al-Monitor.

Speaking with Al-Araby Al-Jadeed newspaper Oct. 7, Hamas leader Yahya Moussa said, “Hamas is in favor of holding legislative and presidential elections at the same time. What’s the point of electing a new PLC while Abbas holds the same position he secured 14 years ago?”

A Palestinian government source in Ramallah told Al-Monitor, "The PA is trying to recruit support from Arab countries for legislative elections, not presidential ones. This is why the subject was raised before Aboul Gheit. In addition, President Abbas listened to the advice of officials in Norway, which he visited Sept. 18-20, who told him to talk about the elections during his UN speech.”

Mukhaimer Abu Saada, a political science professor at Al-Azhar University in Gaza, told Al-Monitor, “Abbas can persuade several Arab countries to support his idea of holding legislative elections. He can pass an official Arab decision to hold them, given his strong ties with Saudi Arabia, Egypt, Jordan and Syria. He can get 11 countries [out of 22 Arab League countries] to rally in his favor and succeed in putting Hamas in the corner, as it doesn't find many supporters in the Arab League, and thus is in an unenviable position.”

The official Arab position is difficult to read, as there is sharp polarization in Arab politics. It's true the PA has a regional network that Hamas lacks. Arab decision-makers in Saudi Arabia, Egypt, the United Arab Emirates and Jordan could agree to pressure Hamas and exclude it from the Palestinian political scene. However, they might not respond to Abbas' demands, fearing that Palestinians would accuse them of interfering in internal affairs and taking sides.

And the PA’s stances do diverge when it comes to possible Arab interference. Wassel Abu Yusuf, member of the PLO Executive Committee, told Al-Monitor, “The elections are a national milestone and do not require any Arab pressure to be implemented. We hope all factions will participate without the need for external pressure.”

However, Abdullah Abdullah, member of the Fatah Revolutionary Council, told Al-Monitor, “The PA is not resorting to Arab countries to try to push Hamas around. We might resort to them simply because we want all obstacles impeding the elections gone. The PA welcomes an Arab role in supervising the elections, especially since it would not be the first time Arab countries have had a say in this, as Hamas took part in the 2006 elections after Qatar persuaded it.”

Abbas' effort to mobilize the Arab League to pressure Hamas would face a number of fundamental problems. First, the Arab League today has no serious political influence in the region's developments. Second, it is divided among itself into opposing currents. Third, the Arab countries themselves are too preoccupied with their own internal issues to help out the Palestinians.

Gaza legal expert Nafez al-Madhoun with the Higher Judicial Institute in the Ministry of Justice told Al-Monitor, “The Arab League doesn't have the power to interfere in Palestinian internal elections. Any action of this kind is a violation of Palestinian privacy and may be a prelude to passing the 'deal of the century' and isolate Gaza, which might not participate in these elections.” Madhoun was referring to the supposed peace deal the United States proposes between Israel and Palestine.

Hamas is aware that Abbas may resort to pressure from the Arab League. It knows that an Arab intervention will not be in its favor, which could prompt the movement to make contacts with the limited Arab countries with which it is still on good terms, such as Qatar, Lebanon, Kuwait and Algeria, to hold back any decision or official Arab action that tightens the noose around it.