Fatah and Hamas are accusing each other of delaying the PLO delegation visit to Gaza aimed at countering the US Mideast peace plan. 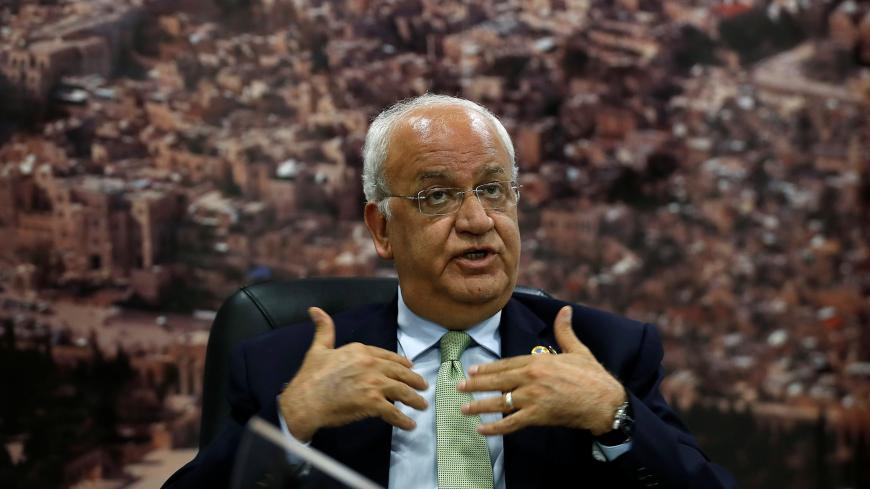 GAZA CITY, Gaza Strip — Palestinian archrivals Fatah and Hamas have something new to argue about.

The factions appeared, briefly, to be moving closer to one another, united in their rejection of US President Donald Trump's Mideast peace plan, dubbed the "deal of the century." But even their common condemnation of the plan that was unveiled Jan. 28 has failed so far to produce anything more than mutual blame.

The PLO, which officially represents Palestinians on the world stage but does not include Hamas, had agreed to send a delegation including Palestinian Authority (PA) President Mahmoud Abbas and Fatah representatives to meet with Hamas in Gaza to discuss how to confront the US plan. Palestinians say the plan heavily favors Israel; the Organization of Islamic Cooperation and the Arab League agree with that assessment.

But the meeting has yet to take place. Fatah says Hamas has yet to send an official invitation, but Hamas says Fatah is insisting on a bilateral meeting without the other Palestinian factions in Gaza. Hamas wants to involve the Islamic Jihad, the Popular Front for the Liberation of Palestine and the Democratic Front for the Liberation of Palestine.

On Feb. 15, PLO Secretary-General Saeb Erekat told Al-Najah news website that Hamas was holding up the PLO delegation’s visit as it has yet to invite the PLO factions. He said the PLO factions are ready to go to Gaza whenever invited.

Also that day, Azzam al-Ahmad, a member of both the PLO Executive Committee and the Fatah Central Committee, told Sabq 24 news that the delegation still intends to visit Gaza but is waiting for Hamas to set an official date.

Hamas replied in a Feb. 16 statement that it would "overlook" the statements blaming it for the delay. Yet it added that such declarations aim to obscure the PA's efforts to obstruct unity.

In early February, the two sides did get as far as trying to schedule a PLO delegation meeting in Gaza. Two Fatah Central Committee members arrived Feb. 7 in Gaza for that purpose, but left Feb. 12 without an agreement.

Hamas spokesman Hazem Qassem told Al-Monitor that Hamas was the first to take the initiative, contacting Fatah as soon as Trump announced his plan. He said Hamas wants to hold a meeting with all the factions to present a unified front.

“We want to enhance joint work instead of bilateral work," he said. That means including forces active on the ground because everyone is targeted by the US plan, and Hamas is still ready to welcome the Fatah movement in Gaza.

Mukhaimar Abusada, a political science professor at Al-Azhar University in Gaza, told Al-Monitor that Abbas only mentioned holding a meeting in Gaza as an initial reaction to Trump’s announcement of his plan. Abbas, he said, doesn't really believe that national ranks need to be unified, that division needs to end and that a way out of the current Palestinian crisis needs to be found.

Abusada said the rationalizations provided by both Fatah and Hamas show that they don't really want to hold the meeting.

“Hamas allowed the US [an American evangelical charity] to establish a hospital in the Gaza Strip at a time when the US is seeking to liquidate the Palestinian cause. Also, Abbas isn't looking to end security coordination [with Israel] as the latter works on implementing Trump’s Mideast plan," he said.

“Hamas knows that Abbas’ position and political project — which is based on negotiations and finding a settlement [with Israel] — have become very embarrassing [since the plan's details were revealed]. So it does not want to rescue him by holding a meeting ... and agreeing on a national strategy that will take him out of his quandary, especially considering that Hamas is deemed the leader of the resistance project.”

Abusada pointed out that Hamas’ insistence on a multilateral meeting may be intended to force Fatah to deal with all the Palestinian factions that Hamas recognizes in Gaza. Fatah does not acknowledge the national factions and forces that were established in Gaza following the Palestinian division in 2007. But Qassem said that is not Hamas' goal, as the work of these factions already shows they cannot be ignored.

Abusada also said Hamas is seeking help from the factions that reject both a settlement and coordinating security with Israel, to pressure Fatah. He said he doesn't expect a meeting to be held soon, and even if one does take place, it won't yield any positive results.

Mustafa al-Sawaf, a political analyst close to Hamas, told Al-Monitor the factions have failed to schedule a meeting because elements within Fatah want to exclude some Gaza factions.

“Gaza is one entity and whoever wants to hold a meeting should meet with everyone there,” he added.

Like Abusada, Hassan Abdo, a political analyst close to the Islamic Jihad, sees blame on both sides. If Hamas really intended to meet, he told Al-Monitor, it would have overcome all obstacles and agreed to a bilateral meeting. Also, he said, if Fatah had a real desire to meet with Hamas, it would have accepted Hamas’ conditions.