Russia once again is working with Palestinian factions to unite them and help them defy Washington's plan for peace with Israel. 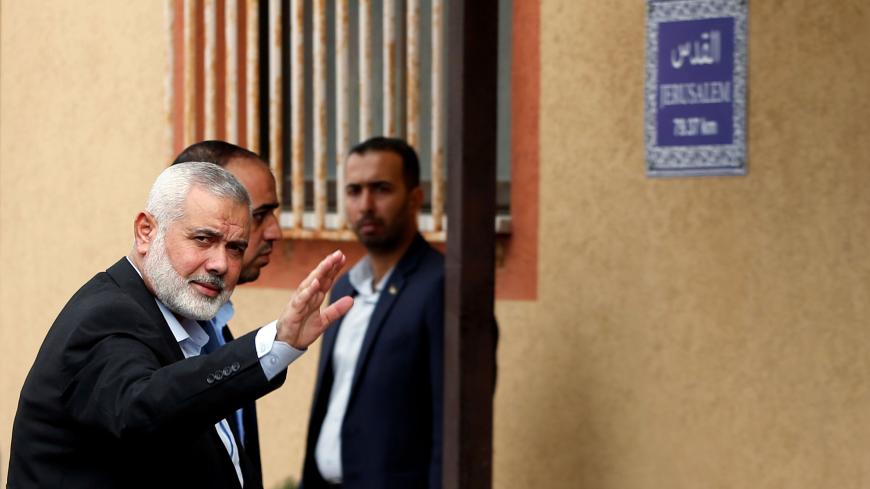 Hamas politburo head Ismail Haniyeh announced at a March 4 press conference in Moscow that Hamas presented four proposals for internal Palestinian reconciliation: forming a national unity government, holding comprehensive Palestinian elections, holding a Palestinian National Council meeting outside of Ramallah so that all Palestinian factions can participate and holding a meeting for the factions' secretaries-general.

Haniyeh said that any of the proposals could achieve internal reconciliation and that Hamas will agree to any option Fatah chooses. He said Russian Foreign Minister Sergey Lavrov welcomed the proposals and expressed Moscow’s readiness to host the Palestinian factions’ meeting.

Lavrov met March 2 with a delegation led by Haniyeh. The Islamic Jihad announced later that day that the Russian Foreign Ministry has invited Islamic Jihad Secretary-General Ziad Nakhala to visit Moscow. Lavrov had met Feb. 27 in Moscow with Hussein al-Sheikh, a member of Fatah’s Central Committee.

A Russian Embassy official in Ramallah in the West Bank told Al-Monitor on condition of anonymity that after separate meetings with various factions, Russia will determine whether it would be useful to schedule a meeting that includes them all.

Reconciliation talks between Fatah and Hamas stalled in March 2018 after a bombing targeted the convoy of then-Palestinian Prime Minister Rami Hamdallah and Palestinian Intelligence chief Majed Faraj during their visit to the Gaza Strip. The Palestinian Authority accused Hamas of planting the bomb.

In February 2019, Moscow hosted a meeting that included 14 Palestinian factions, in a bid to end the rift and agree on a united political program. But the factions failed to issue a final statement because they disagreed on some of the proposals.

Regarding the four options Hamas just presented, Fatah Revolutionary Council Secretary Majed al-Futaini told Al-Monitor, “We had already agreed on the choices that Haniyeh proposed in the 2017 reconciliation agreement. But Hamas is preventing their implementation, as it is focused on its interests and wants to continue ruling the Gaza Strip.”

Futaini added, “Still, we welcome any Russian efforts in this regard, as they complement the endeavors of Egypt, which is the main sponsor of the Palestinian reconciliation dossier.” He indicated, however, that Fatah believes internal reconciliation meetings should be held in Palestinian territories, namely in the Gaza Strip.

Some progress is being made in that regard. A Fatah convoy arrived March 4 in the Gaza Strip to prepare the way for an upcoming visit planned by a Palestinian Liberation Organization (PLO) delegation to meet with factions for talks on the US peace plan and internal reconciliation. Hamas and Fatah had been at each other’s throats for days regarding the visit. Fatah accused Hamas’ leadership in Gaza of delaying approval for the delegation’s visit, while Hamas accused Fatah of insisting on holding a bilateral meeting with it, rather than with all Palestinian factions. But Haniyeh announced March 3 that Hamas agreed to welcome the West Bank delegation to Gaza without any preconditions.

Ibrahim al-Madhoun, a political analyst close to Hamas, told Al-Monitor the timing is good for reconciliation, as Palestinian factions are convinced their cause faces real threats from the US peace plan. Palestinians say the plan, dubbed the "deal of the century," heavily favors Israel.

He said the four reconciliation proposals Hamas presented to Russia are designed to help Moscow bridge the Palestinian divide and should be a good base for Russian endeavors to succeed.

Russia seems bent on playing a bigger role in internal Palestinian affairs and the Israeli-Palestinian conflict, and is capitalizing on the void left by the United States after Trump declared Jerusalem as Israel’s capital in December 2017 and the United States moved its embassy there from Tel Aviv in May 2018. The estrangement only worsened when Trump unveiled the Mideast peace plan Jan. 28. Palestinian President Mahmoud Abbas called Haniyeh that day, and they agreed to cooperate to challenge the US plan.

Imad Ayada, a political science professor at Birzeit University, told Al-Monitor, “Russia is trying to fill the vacuum that the US left when it pulled away from several issues in the Middle East. In this regard, Moscow is seeking a greater role in [ending] the Israeli-Palestinian conflict ... and uniting Palestinians to eliminate the pretexts of the US and Israel that Palestinians are divided with no one representative to talk to.”