The Palestinian Authority has accused Hamas of going over its head in meeting with Russian officials about the US peace plan. 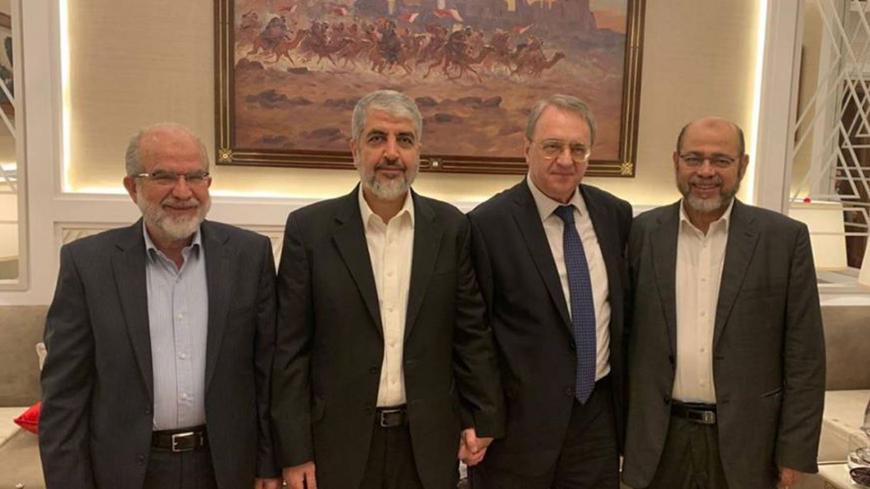 A senior Hamas delegation met with Russia’s Deputy Foreign Minister Mikhail Bogdanov in Doha Feb. 18. The meeting was focused on the Palestinian objection to the US peace plan and the UN Security Council and relevant General Assembly resolutions as well as the Arab Peace Initiative.

The Russian delegation was led by Bogdanov, who also serves as the special representative of President Vladimir Putin in the Middle East and Africa, and Russian Ambassador to Doha Nur Muhammad Kholov.

In a statement, Hamas reported that it asserted to the Russian delegation its rejection of Washington’s peace plan, which is detrimental to the Palestinian people, their legitimate right to return and the efforts to establish an independent sovereign Palestinian state. The two delegations held in-depth talks about restoring Palestinian national unity.

Bassem Naim, a former health minister in the Gaza government and a member of Hamas’ international relations office, told Al-Monitor that the Islamic movement “is keen on establishing relations with Russia. Our meeting was part of our efforts to confront the deal. We held the talks in Doha because Bogdanov was visiting Qatar.”

“Hamas believes the Russian influence in the region can work in favor of the Palestinians to pressure Israel. Hamas’ close ties with the countries that have strong relations with Russia, such as Iran, Turkey and Qatar, mean ... Moscow will realize that Hamas cannot be bypassed” when Russia proposes solutions, Naim added.

Saleh al-Arouri, deputy head of Hamas’ political bureau, said during a Feb. 22 interview on Al-Aqsa TV that Hamas leader Ismail Haniyeh is slated to visit Moscow at the beginning of March for talks with Russian officials about the implications of the US peace plan and its impact on the future of the Palestinian-Israeli conflict.

Meanwhile, well-informed sources told Al-Ghad TV Feb. 19 that Haniyeh will discuss the issue of Palestinian reconciliation during his visit to Moscow, where the different Palestinian factions might come together for talks.

“Israel does not want Hamas moving in the regional and international arenas, as it fears the international community opening to the Islamic movement. However, Israel hopes that Hamas’ relations with Russia will push the latter to pressure the movement to show more flexibility toward Israel. This would serve the efforts for calm in Gaza and work to the benefit of Israel’s security interests in Gaza,” Imad Abu Awad, an analyst on Israeli affairs at the Vision Center for Political Development, told Al-Monitor.

Hamas’ relationship with Russia began in 2006, when the movement won the legislative elections in the Gaza Strip, and have been growing since. Russia, a superpower and a permanent member of the UN Security Council, has strong international ties and broad diplomatic influence.

Hamas seeks to intensify its contacts with Moscow in a bid to strengthen its positions in the Israeli-Palestinian conflict and to galvanize Moscow’s diplomatic potential into thwarting Washington’s peace plan through Russia’s veto power at the Security Council against any US effort to replace international resolutions with the plan.

Hussam al-Dujni, a political science professor at Umma University in Gaza, told Al-Monitor, “The meeting between Hamas and Russian officials in Doha is a continuation of previous talks. Haniyeh was not present as he is preparing to arrange a visit to Moscow soon to discuss the deal.”

Russia has played several roles in the Palestinian issue, including in the reconciliation process between Hamas and Fatah, peace with Israel, efforts for a truce to lift the blockade on Gaza and a prsioner swap between Hamas and Israel. The Islamic movement seems to understand Russia’s relationship with Israel and see it as an opportunity to relay messages to the Israeli government.

Meanwhile, the Palesitnian Authority is wary of Hamas’ relations with Russia “since the PA is the sole legitimate representative of Palestinans,” according to Dujni.

The PA could have viewed the Hamas and Russia meetings as part of wider diplomatic efforts to strengthen Russia’s role in the Palestinian cause. A unified Palestinian delegation to meet with the Russians would have indeed been better, but the ongoing division between Hamas and Fatah continues to undermine the Palestinians' efforts.

A Palestinian official close to President Mahmoud Abbas told Al-Monitor on condition of anonymity that the “PA welcomes any endeavor to face the 'deal of the century.' Russia is capable of doing so. We have initiated intensive contacts with Moscow since the rollout of the deal.”

In the Doha meetings, Hamas' representatives told the Russian officials that Trump’s peace plan affects not just the Palestinians but the international balance of power as the US tries to become the sole decision-maker in the Palestinian-Israeli conflict. Hamas is trying to prompt Moscow to balance the US influence.

Ahmed Hussein, a researcher on international affairs at the Doha-based Arab Center for Research and Policy Studies, told Al-Monitor, “It is not surprising that Doha hosts a meeting that brings Hamas together with Russians. Qatar wants to galvanize the efforts of the international stakeholders, including Europe, Russia and China with regard to the 'deal of the century.'”

Hussein concluded, “With the expansion of Russia’s influence in the region, we might soon see a Russia-Qatari initiative to end the Palestinian division as a prelude to unifying the Palestinian-Russian efforts against the plan.