Will Russia succeed where the US has failed? 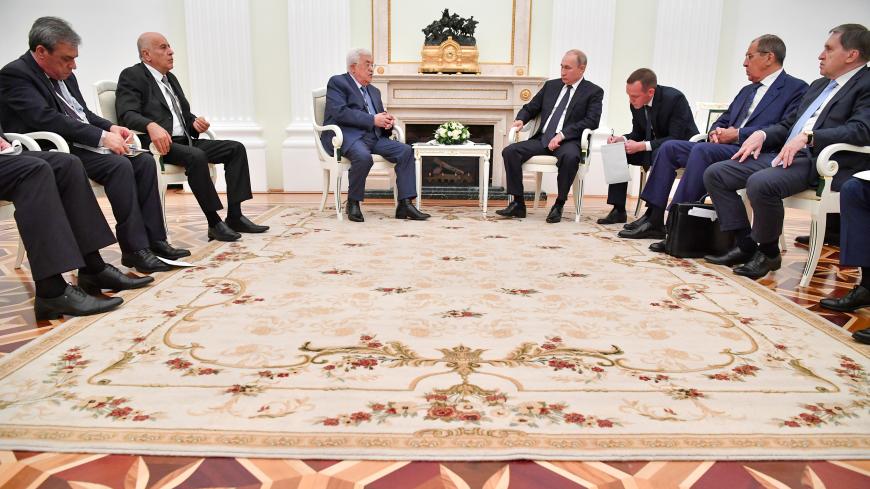 Russian President Vladimir Putin had a telephone conversation July 12 with his Palestinian counterpart, Mahmoud Abbas, to discuss the so-called deal of the century, the Bahrain economic workshop, the two-state solution and the establishment of a Palestinian state.

During the conversation, Abbas briefed Putin on the crisis with Israel, the daily Israeli violations and the Palestinian financial crisis resulting from Israel's seizure of Palestinian funds. He said the Russian effort, as far as Palestinian reconciliation is concerned, is important and appreciated.

Putin told Abbas that international legitimacy is essential when it comes to settling the Palestinian-Israeli conflict, that economic support may not override a political solution to the conflict and that he will work with the United States and Israel to promote a two-state solution.

Ahmed al-Deek, political adviser to the Palestinian minister of foreign affairs, told Al-Monitor, “The Palestinian leadership is all for establishing communication channels with the Russians. We are not strengthening our relations with them in order for them to adopt our positions, or so we turn our backs on the US administration. We are working on having the US and Russia support the legitimate rights of the Palestinian people. We also welcome Russia's contacts with Hamas and have no reservations about the movement's presence in Russia to boost Moscow's efforts to end division.”

Hossam Badran, a member of Hamas' political bureau, announced July 15 that a Hamas delegation led by Moussa Abu Marzouk, head of Hamas’ International Relations Bureau, had arrived in Russia at the invitation of the Russian Foreign Ministry to discuss the strengthening of relations between the two sides.

Abu Marzouk met July 16 with Russian Deputy Foreign Minister Mikhail Bogdanov and his team in Moscow, and he briefed them on the latest developments in the Palestinian cause and Hamas’ rejection of the deal of the century and the Bahrain conference.

On the same day, Bogdanov said he was keen to develop relations with Hamas and hear the delegation’s views regarding the Palestinian cause, regional developments and the deal of the century.

The Russian Foreign Ministry said that there is no alternative to a political solution that goes in line with Security Council resolutions, the 1991 Madrid Conference and the 2002 Arab Peace Initiative.

Bassem Naim, a former Hamas health minister and member of the Hamas International Relations Bureau, told Al-Monitor, “Hamas is increasing its visits to Russia in order to establish its presence in the international arena and inform the world that it is not a terrorist movement as promoted by the US and Israel. The movement got an official reception in a country deemed as the second super-power in the world, and it hopes its visit to Moscow would set the stage for visits to other capitals around the world. We hope that Russia's efforts to end division would come to fruition despite the little hope that the Palestinian Authority’s weak response to reconciliation initiatives gives us.”

Neither Fatah nor Hamas hide their appreciation of Moscow's support for the Palestinian people and the Russian confrontation of the international pressure aimed at liquidating the Palestinian cause.

Restraining the US efforts — as far as the deal of the century is concerned — is helping to push Palestinians toward Moscow. Putin's phone conversation with Abbas and Abu Marzouk’s meeting with Bogdanov are expected to have included discussions about the actions that Russia intends to take to stop the US monopoly in the region.

Ahmed Yousef, former political adviser to Hamas leader Ismail Haniyeh, told Al-Monitor, “Hamas is watching Russia's contention with the US over the Middle East, and since the Palestinian cause is essential, Hamas hopes that its relationship with Russia will foil the deal of the century. One of the principles of Hamas' foreign policy aims at ending the US-Israeli tutelage over the Palestinian cause and preventing them from monopolizing the solutions. The movement plans to do so with the help of other international parties, such as Russia.”

Abu Marzouk announced at a press conference held in Moscow July 17 that besides the issues related to the Palestinian cause, he discussed with his Russian hosts regional and international issues. He considered the tightening of the US sanctions on Iran as a type of war, and urged Russia to help Iran stop the US attack on countries that are politically opposed to it. He called on the world to stop using the US dollar and stop feeding the US economy.

In February, Moscow hosted a meeting that brought together 12 Palestinian factions to try to reach national reconciliation, but the meeting failed to produce a unified statement because of the existing differences and disagreements over the role of the PLO.

Hani al-Masri, head of the Palestinian Center for Policy Research and Strategic Studies (Masarat) in Ramallah, told Al-Monitor, “Unlike the US, Russia is establishing contacts with Fatah and Hamas on the one hand and the PA and Israel on the other in order to strengthen its foreign policy and pave the way for mediation channels.”

As opposed to the United States' severed ties with the two movements, Russia is one of the few countries to have established contacts with both Fatah and Hamas. This enables it to control all aspects of the Palestinian cause.

However, Israel's lack of enthusiasm for having a country than the United States try to resolve its conflict with the Palestinians may stand in the way of Moscow's efforts and reduce its role to appeals and demands.