Hamas’ visit to Moscow raises questions about the movement’s objectives and about Russia’s increased influence in the Middle East and in the Palestinian arena. 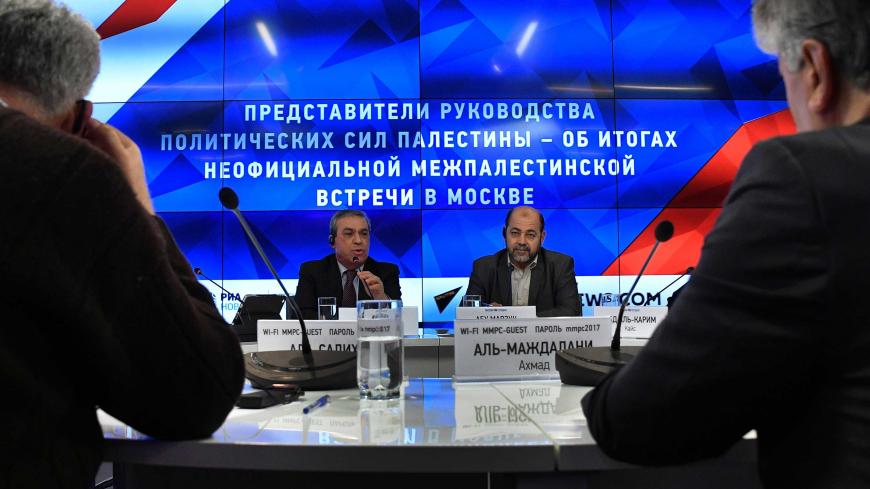 A delegation of Hamas leaders visited Russia on Sept. 18. The delegation was headed by the deputy head of Hamas' political bureau, Mousa Abu Marzouk, and included Hamas political bureau members Saleh al-Arouri, Hossam Badran, Sami Khater and Mohammad Sawalha. They met with Mikhail Bogdanov, Russia's deputy foreign minister and special presidential representative for the Middle East, as well as other officials at the Russian Foreign Ministry.

Badran told Al-Monitor, “The visit is an important milestone in Hamas' foreign ties, because Russia is a great power, at a time when the United States wants Hamas to be labeled as a terrorist group and be isolated. The meeting with Bogdanov at the ministry’s headquarters focused on the [Hamas-Palestinian Authority] reconciliation and Russia’s support for Hamas' positive stances. We met also with Russian politicians who are close to the decision-making circles; there is no need to reveal who they are.”

He added, “During the visit the Hamas leadership held a press conference [Sept. 19] attended by 60 media outlets, answering reporters’ questions, which focused on the reconciliation process and Israeli practices against Palestinians in the West Bank. For instance, they asked about the settlements, confiscation of land, spread of checkpoints, arrests, Judaization of Jerusalem, the situation of Palestinian prisoners and the inhumane siege imposed on the Gaza Strip. We have also asked Russia to provide our people in Gaza with humanitarian assistance.”

A Sept. 19 press release by Russia’s Foreign Ministry said Bogdanov met with a Hamas delegation. Bogdanov had said Sept. 18 that Russia does not consider Hamas to be a terrorist organization, given that it is part of the Palestinian community, government and the Palestinian Legislative Council. Also, Bogdanov welcomed the Hamas decision Sept. 17 to dissolve the administrative committee, considering it to be an important step on the reconciliation path.

Russian Foreign Minister Sergey Lavrov said Sept. 10, “Russia — in coordination with some Arab countries — is in close contact with Fatah and Hamas, to persuade them to return to the reconciliation agreement.”

Abdul Sattar Qassem, a political science professor at An-Najah National University in Nablus, told Al-Monitor, “The Hamas visit to Russia should not be overstated. Although Russia wants to have further influence in the Middle East and a bigger role in the Palestinian cause, its stances are not in line with those of Hamas. Contrary to Hamas, Moscow calls for the implementation of the two-state solution and is against armed operations. Hence, it is better that Hamas does not expect much from Russia, that Hamas await Russian actions when it comes to the Palestinian cause and that Hamas does not content itself with press releases.”

Remarkably, the Hamas Sept. 21 statement spoke about how the group would have a representative to Moscow, whom it said was a member of the delegation, without naming him. This would mean that both sides made progress in some political understandings. Besides, the Hamas website said Sept. 13 that Abu Marzouk met Sept. 12 with Russia's ambassador to Cairo, Sergei Kirpichenko, and briefed him on the latest political developments about the Palestinian cause. It added that both sides raised the issue of the US bias toward the Israeli side.

Hamas’ foreign relations chief Osama Hamdan told Al-Monitor, “The Hamas delegation’s visit to Moscow was at the invitation of Russia not long ago. Although Hamas-Russian ties go back a decade, Moscow endeavored to push forward national reconciliation and supported the Egyptian efforts in this regard.”

Hamas probably believes that the visit to Moscow is a turning point on its political path. It is well-aware of how strong Russian-Israeli ties are, but does not view them to be an obstacle to its ties with Moscow. This is because it seeks Russia’s political backup, and perhaps Moscow’s support to avert any Israeli threat or aggression.

Hamas may also perceive that its rapprochement with Russia would pave the way for the movement to have a say in the Palestinian decision-making process, and to have the international community and regional countries recognize its future role in any settlement to the Palestinian cause.

A senior Palestinian official close to Palestinian President Mahmoud Abbas told Al-Monitor on condition of anonymity, “The Palestinian Authority [PA] is not against Hamas' visit to Russia. Political relations do not survive with nothing in return. Russia is part of the international Quartet and calls for Israel recognition. Will Hamas agree on such a political program? Although Russia will not require that Hamas commit to Russian positions and paths, their ties are more likely to collapse should their positions continue to diverge.”

Hussam al-Dajani, a Hamas expert and political science professor at Al-Ummah University in the Gaza Strip, told Al-Monitor, “Hamas' visit to Russia goes in line with the Russian positions toward the movement. Moscow has not labeled Hamas as a terrorist organization, since it won the 2006 legislative elections. They had good bilateral ties. Since Russia is a major power, any ties between both sides will certainly be beneficial for Hamas and support its stances in the international system. This is true particularly since Russia is on good terms with Israel, the PA and Egypt. Hence, this would promote efforts to achieve reconciliation.”

Hamas may have a list of demands and ambitions behind boosting its relations with Russia and its repeated visits to Moscow. However, Russia may not be offering much, even if Hamas is currently seeking to open a representation office in Moscow, to obtain political support or to narrow divergence in views with Western countries.

Moreover, Russia may promote ties with Hamas by giving the movement advice and guidance with a view of including Hamas in Russia's alliances in the Middle East alongside Iran, Syria and Hezbollah.