Russian interactions with Palestinians seen as all talk, no action

Russia is showing its reach with Palestinian factions in advance of elections, but there is still no sign that Moscow is having an impact. 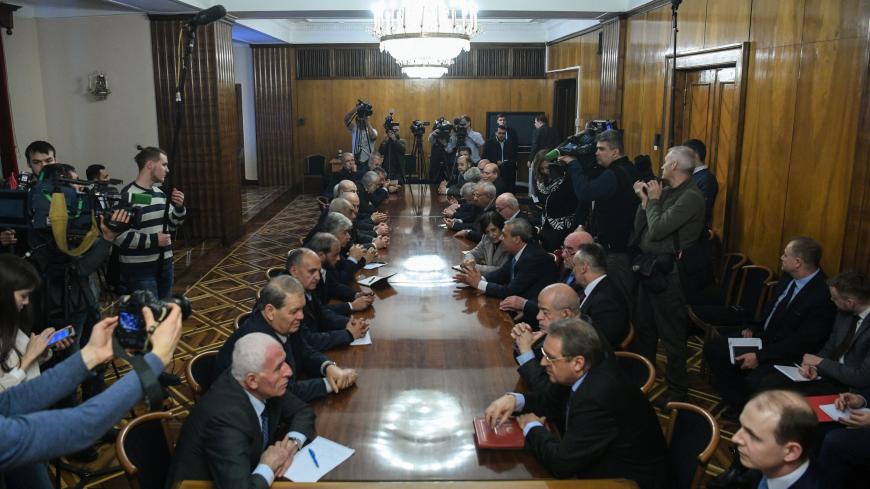 Representatives of Palestinian groups and movements, who are in Moscow for intra-Palestinian talks, attend a meeting with Russian Foreign Minister Sergey Lavrov on Feb. 12, 2019. - KIRILL KUDRYAVTSEV/AFP via Getty Images

In late January and early February, a number of Palestinian leaders from different factions headed to Moscow to meet with officials from the Russian Foreign Ministry to discuss the upcoming Palestinian elections and internal reconciliation, in addition to bilateral relations. Yet despite the frequency of visits, results are still lacking.

On Feb. 4, a Hamas delegation led by the head of the movement’s international relations office, Mousa Abu Marzouk, visited Moscow and met with Mikhail Bogdanov, the Russian deputy foreign minister and special presidential envoy for the Middle East and Africa, and with Alexei Skoyerev, the deputy head of the Middle East Department in the Russian Foreign Ministry.

Hamas issued a statement the same day saying the discussions focused on restoring Palestinian unity and the preparations for the Palestinian elections, noting that the delegation is keeping the Russians in the loop of Palestinian developments and ensuring that Palestinian-Russian coordination remains ongoing.

On Feb. 2, Bogdanov met in Moscow with a delegation from the Islamic Jihad, led by Secretary-General Ziyad al-Nakhala, to discuss Palestinian political developments and the upcoming elections. The Islamic Jihad issued a statement Feb. 5 stressing the importance of the Russian role in the international and regional arenas and the need to stop hegemonic US policies.

Basem Naim, a former Palestinian health minister and a member of Hamas’ international relations office, told Al-Monitor, “Hamas sees Russia as a central power at the international level and realizes its importance as a superpower. I believe Hamas’ visit to Russia is of great significance as it shows the international community that it is difficult to isolate the movement [Hamas] politically.”

Naim added, “During Hamas’ recent visit to Russia, the movement’s reconciliation with Syria was not discussed. Rather, the discussions were limited to the elections and ending the Palestinian division. The Russians want to see their Palestinian friends united, and they are not looking to compete with the Americans in the Palestinian arena. It would not be the same scenario as in Syria, where the Russians are in charge almost exclusively.”

Hanna Issa, a former diplomat at the Palestinian Embassy in Moscow, told Al-Monitor, “Palestinian visits to Russia are proof of the latter’s great role. Given its [relations] with both Palestinians and Israelis, Russia is able to mediate between them to resume negotiations. For its part, the Palestinian Authority (PA) is not [opposing] Russia’s reception of some factions, because this is an internal Russian affair. On the contrary, it is rather counting on Russia's success in bringing its [the PA’s] views closer to Hamas’.”

On Jan. 28, Bogdanov met with a delegation from the Democratic Reform Current, led by dismissed Fatah leader Mohammed Dahlan. The delegation, headed by Samir al-Mashharawi, Dahlan’s right-hand man, discussed the restoration of Palestinian unity, preparations for the elections and Arab and international efforts aimed at unifying the Fatah movement.

On Jan. 19, Hussein al-Sheikh, a member of Fatah’s Central Committee, visited Russia where he held meetings with Foreign Minister Sergey Lavrov and Bogdanov to discuss a range of issues, including the Russian leadership’s positions vis-a-vis new developments involving Palestinians and the upcoming elections, in addition to US-Palestinian relations.

On the same day, Bogdanov met with a delegation from the Popular Front for the Liberation of Palestine headed by Maher al-Taher, the movement’s political relations official, and discussed Palestinian, Arab and international political developments, their repercussions for the Palestinian path and Palestinian efforts to reach a unified, realistic political vision before the international community.

Ahmed al-Deek, the political adviser to the Palestinian Foreign Ministry, told Al-Monitor, “The recent Palestinian visits to Moscow seek to resolve the Palestinian conflict with Israel based on international decisions and to bridge the internal Palestinian division in light of the good relations between the Russians and all the factions.”

Imad Mohsen, a spokesman for Dahlan, told Al-Monitor, “The Democratic Reform Current has a close relationship with Russia, and our delegation discussed with its officials improving bilateral relations and restoring the unity of Fatah. But the exclusion and exclusivity mentality of the PA leaders makes them [PA leaders] feel anxious after every foreign visit we make.”

Yet while Russia has welcomed Palestinian delegations from various factions, the Palestinians have yet to notice a Russian strategic change toward them. Rather, the Russian performance appears to have been the same for years; mostly serving Russian interests, not helping the Palestinians.

Following Hamas’ victory in the 2006 parliamentary elections, Russia established formal ties with the movement. Khaled Meshaal, then head of Hamas’ political bureau, visited Moscow, marking a major breakthrough for Hamas in its international relations. Russia, meanwhile, rejected the US designation of the movement as a terror organization. Hamas delegations have since flocked to Moscow, while Hamas leaders met on several occasions with Russian officials in the Qatari capital, Doha, to discuss bilateral relations, the Palestinian cause and ways to confront the US peace plan for the Middle East. Yet these visits and meetings have not produced any Russian financial support to the Gaza Strip, which is ruled by Hamas.

Khalil Shaheen, director of the Palestinian Center for Policy Research and Strategic Studies, told Al-Monitor, “Russian activity in the Palestinian arena may be linked to its competition with the new US administration, which will restore its role in the Israeli-Palestinian conflict. Perhaps Russia seeks to build a unified Palestinian political system that allows Hamas to be integrated into the next Palestinian government after the elections.”

Shaheen added, “The PA supports Moscow in exercising its influence on Hamas to soften its positions, but its reception of Dahlan’s delegation disturbed the PA, which refuses to deal with him, even though the Russians seek internal Fatah reconciliation and are persuading Dahlan not to run for the elections before resolving his problems with President Mahmoud Abbas.”

The Palestinians are constantly comparing the Russian role in their cause, which seems limited to pointless routine meetings and media rhetoric, to Russia’s performance in Syria and Libya, where Moscow employs its military and field influence to impose its will on the ground for its own interests.

Wissam Afifa, the director of the Al-Aqsa satellite channel in Gaza, told Al-Monitor, “The recent Palestinian visits to Moscow are important, but they focused only on obtaining guarantees from the Russians that the elections will succeed. Palestinians feel that Russia is not encouraged to compete with the European and US roles in the Palestinian file, despite [the meetings] with Palestinian leaders. Russia’s influence is limited as the outcomes of their meetings [with Palestinians] do not reflect their efforts.”

Afifa added, “Hamas is interested in strengthening its relations with Moscow, because their allies are common, such as Hezbollah and Iran. But Russia is not encouraged to reconcile Hamas and the Syrian [regime], fearing this would complicate the Syrian scene and push Israel to increase its operations there in pursuit of Hamas cadres, as it is already targeting Iranian bases in Syria.”

Moscow is one of the few capitals around the world that opens its doors to the Palestinian factions, but its recent behavior has come across as mere public relations work to the media to show the international community that Russia still has influence in the Palestinian scene — knowing that no agreement or propositions to end the Palestinian division are ever announced during the Russian-Palestinian meetings, several officials who visited Moscow recently told Al-Monitor.