Hamas courtship of Russia could lead to win-win romance 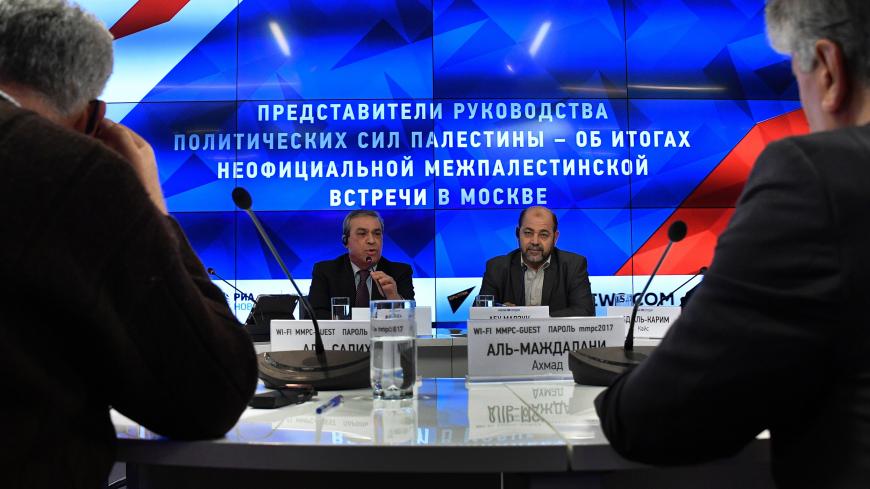 Hamas’ relations with Russia have improved and grown in recent years, with movement leaders regularly visiting Moscow since 2015. A delegation headed by Hamas political bureau member Moussa Abu Marzouk most recently made the trek, meeting June 25 with Mikhail Bogdanov, Russian deputy foreign minister and special presidential envoy to the Middle East. Hamas noted on its website that Marzouk and Bogdanov explored bilateral relations and exchanged opinions on issues in the region, Palestinian developments and Hamas' faltering attempt at reconciliation with Fatah.

“Regarding the US ‘deal of the century,’ Russians asserted that they were not consulted and that they are neither partners in it nor concerned about its success,” Marzouk said. “Moscow believes Washington isn't qualified to solve the problems in the region. We believe Russia is more qualified, as it has balanced relations with all parties. We consider it a world power and an effective member of the international Middle East Quartet and the [UN] Security Council. The PA should not worry about our visit, as it's not aware of its details.”

After meeting with the Hamas delegation, Bogdanov revealed that Moscow is considering inviting Palestinians from Hamas and Fatah to visit to work toward a reconciliation. He asserted that the United States has not shown Russia its Middle East plan and added that Russia is steadfast in its support of the Palestinian people and in providing aid to relieve the humanitarian crisis in Gaza.

The Hamas visit to Moscow coincided with a high-profile tour of the Middle East by a US delegation led by presidential adviser Jared Kushner and US envoy for Middle East negotiations Jason Greenblatt. Hamas’ trip to Moscow might have been timed by the movement and Russia to send the message that the US administration is not the only player in the region.

Moscow having direct relations with Israel, Egypt, the PA and even Iran makes it attractive to Hamas, viewing it as a key actor in the Middle East. Meanwhile, US relations with several parties have deteriorated, and it has none with Hamas and Iran. It would appear that Russia has the upper hand to potentially negotiate an end to Israel's blockade against Gaza and mediate a Hamas-Fatah reconciliation.

Abdullah Abdullah, head of the political department of the Palestinian Legislative Council (PLC) and a member of Fatah’s Revolutionary Council, views Hamas' perceptions as mistaken. He told Al-Monitor, “Russia wants to cement its regional influence by opening channels with Palestinian parties like Hamas. But Hamas’ strategic error is that it considers itself a substitute for the [PLO] and Fatah and sees its international relations with Russia, for instance, as a prelude to [Russia dealing with Hamas] as such. Hamas should be more mature, and it should accept that it will never replace us, even if it gives Russia a role in wrapping up the reconciliation. This is a difficult issue.” It should not be forgotten that Egypt had initially taken the lead in reconciliation negotiations and failed.

Hamas is trying to compensate for its regional and international isolation by cozying up to Russia. Israel, however, might nip this relationship in the bud by approaching Russia. Israel wants to deprive Hamas of any and all international recognition, which means the movement’s road to the Kremlin won’t be a bed of roses. A tug-of-war between Russia and Israel could ensue.

Mukhaimer Abu Saada, a political science professor at Al-Azhar University in Gaza, told Al-Monitor, “Russia’s relations with Hamas [date to] 2006. Russia wants to foil the ‘deal of the century’ and is worried about the impact of Gaza’s situation on Hamas’ susceptibility regarding a deal. However, Russia doesn’t impose decisions on Hamas. Meanwhile, the PA is worried about Hamas-Russia relations because they undermine [the PLO's] exclusive representation of Palestinians. Hamas is the [PLO and the PA’s] competitor at the end of the day.”

Khaled Meshaal, former head of Hamas' political bureau, met with Russian Foreign Minister Sergey Lavrov in 2015 in Qatar. Bogdanov also met with Meshaal in 2015, and a Hamas delegation traveled to Moscow in January 2017. Delegations also visited Russia in September 2017 and again in March 2018.

Ahmad Youssef, former adviser to Ismail Haniyeh, current head of Hamas' political bureau, told Al-Monitor, “Hamas’ visits to Russia stem from [the movement’s] limited foreign relations. It is an achievement that Russia opened this door for us, and it is conveying our messages to the international community. Russia needs Hamas for its influence among the masses. It is a win-win situation.”

He added, “Hamas is concerned about [Trump's plan], and Russia is on the same page. The PA’s rejection of our communications with Russia is unacceptable. As long as Gaza is under siege, Hamas has the right to seek ways to break this isolation.”

Hamas leaders’ increasing visits and contacts with Russia are in search of ways around the isolation imposed on it by Israel, the United States and some Arab countries. Russia has close relations with Hamas allies Qatar, Turkey and Iran, which perhaps aligns with Moscow's desire to foster its role in the region. With the United States cutting back its presence in Syria, Russia’s regional influence is expanding. It sees in Hamas a chance to fill the void resulting from deteriorating US relations with several parties in the region.