Most Palestinian factions have accepted the initiative launched by Ramadan Shalah, the secretary-general of the Palestinian Islamic Jihad, but will this initiative remain mere ink on paper? 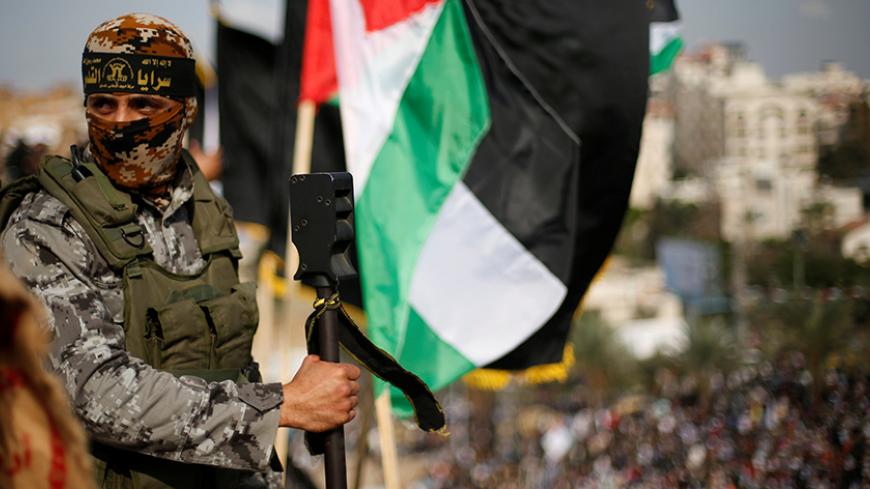 GAZA CITY, Gaza Strip — On Oct. 21, Ramadan Shalah, the secretary-general of the Palestinian Islamic Jihad, launched an initiative to resolve the internal Palestinian crisis. The initiative was widely welcomed by the Palestinian factions except for the Fatah movement, which had some reservations.

Regardless of acceptances and reservations, the most important question remains whether this initiative will see its way to implementation on the ground in light of the failure of all previous reconciliation initiatives such as the 2011 Cairo Agreement, the 2012 Fatah-Hamas Doha Agreement and the 2014 Beach Refugee Camp Agreement.

Shalah launched the initiative in his speech that was broadcast live on the Palestine Today satellite TV channel during the annual festival in Gaza City hosted by the Islamic Jihad marking its 29th anniversary. In his 10-point initiative, Shalah stressed the need to hold a comprehensive national dialogue and urged Palestinian President Mahmoud Abbas to take serious steps to achieve reconciliation and work on activating the Temporary Leadership Framework of the PLO — specified in the 2005 Palestinian Cairo Declaration as a first step to reform the PLO — to include all Palestinian factions.

Shehab explained that the initiative is a comprehensive solution to the deteriorating Palestinian situation as a result of the internal division, hoping for serious and quick steps by Abbas to end the political dispute as well as for the participation of all spectrums of the Palestinian people in the decision-making process.

Fatah expressed reservations in regard to the initiative, seeing it as unrealistic, exaggerated and inapplicable.

In this context, Fatah spokesman Fayez Abu Eita told Al-Monitor, “In principle, we encourage any dialogue based on ending the division. We have received the written copy of Shalah’s initiative, and our movement and its institutions are currently examining it.”

He explained that Fatah calls for the serious implementation of the previous Hamas-Fatah reconciliation agreements by Hamas, refusing at the same time to disclose the points in Shalah’s initiative on which his movement expressed reservations.

Jamil Majdalawi, a member of the Palestinian Legislative Council, the Popular Front for the Liberation of Palestine, and Patriots to End the Split and Restore the National Unity movement, told al-Quds radio station Oct. 23 that Shalah’s initiative reanimated the Palestinian political stagnant scene. He pointed out that the main problem is that leaders in Fatah and Hamas are not serious about the reconciliation.

Dismissed Fatah leader Mohammed Dahlan also welcomed the initiative. He posted on his Facebook page Oct. 22 that the initiative includes several commonalities between the various Palestinian national factions, particularly with regard to national unity, calling for the intensification of contacts between all Palestinian factions to hold a new national dialogue in Cairo.

Mkhaimar Abusada, a political science professor at Al-Azhar University in Gaza, told Al-Monitor that Shalah’s initiative brings nothing new to the table, explaining that the points raised in it have been previously introduced in the 2005 Palestinian Cairo Declaration, the 2011 Cairo Agreement, the 2012 Fatah-Hamas Doha Agreement and the 2014 Beach Refugee Camp Agreement.

He criticized Shalah’s initiative, saying, “Such initiatives should not be launched in public speeches; the repercussions of the cancellation of the Oslo Accord and the withdrawal of recognition of Israel need a legal and political study.”

Political analyst Hassan Abdo told Al-Monitor that the major challenge is the Palestinians’ ability to put Shalah’s initiative into action to end the internal division and unify the Palestinian political system, noting that this will only be achieved through a comprehensive national dialogue based on the previous agreements and the new initiative.

He stressed that the success of the initiative depends primarily on Abbas and his desire to take serious steps to launch a comprehensive Palestinian dialogue, describing Fatah’s early reservation on the initiative as aimed to obstruct any program for its implementation on the ground.

He pointed out that the overwhelming approval of Shalah’s initiative by the Palestinian factions puts pressure on Abbas and Fatah to implement this initiative.

In his speech, Shalah also called on the Arab states not to blame the Palestinian resistance for receiving Iranian support, saying, “No one is entitled to blame us for accepting Iran’s support. Iran is virtually the only country that openly insists on its military, political and financial support to the Palestinian cause.”

He added, “We did not expect to live to see the day when helping Palestinians would be seen as a crime in the Arab world.”

In the same vein, Shehab told Al-Monitor, “Shalah described the Arab reality thoroughly by saying that the Arab states have abandoned the Palestinians in favor of Israel, while Iran continues to provide support for the Palestinian people and resistance.”

“Has the Palestinian resistance become a crime in numerous Arab countries?” he wondered, rejecting any accusation or reproach against the Palestinians for accepting Iranian support.

Abu Eita believes the Arab states are a strategic supporter of the Palestinian cause, and he calls on the Palestinian factions to maintain the best relations with Arab countries.

There is a deep-rooted conviction among Palestinians that the only solution for the internal division and lukewarm relations with the Arab countries lies in renewing the current Palestinian political system through comprehensive local council, legislative and presidential elections preceded by a serious national dialogue.