Hamas has accused the consensus government of failing to assume its responsibilities toward the Gaza Strip, which explains the movement’s recent call for the return of Ismail Haniyeh’s government to Gaza. 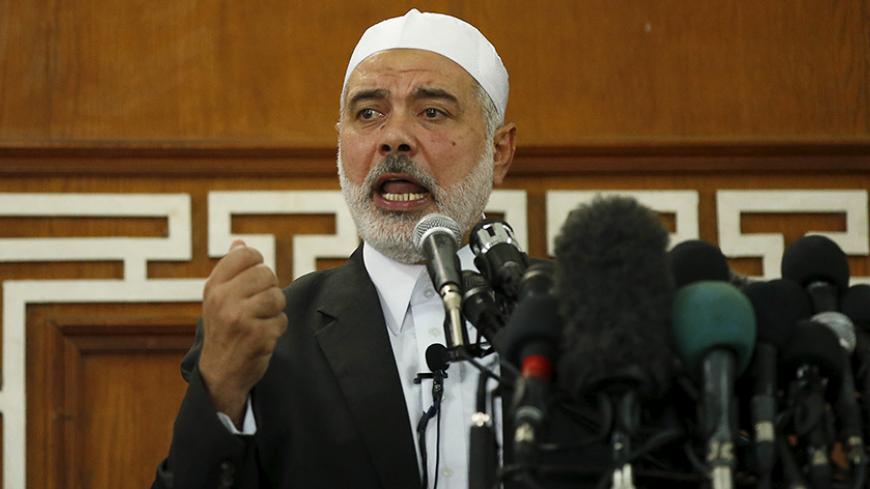 GAZA CITY, Gaza Strip — On Oct. 13, the Legal Committee of the Palestinian Legislative Council (PLC) endorsed a recommendation on reviewing the study submitted by some Hamas members of parliament for the return of the 11th government to its functions in the Gaza Strip. The Ismail Haniyeh government resigned on June 2, 2014, following the Beach Refugee Camp agreement, to pave the way for the formation of the national consensus government headed by Rami Hamdallah. The recommendation stirred controversy on the Palestinian arena.

The PLC (Hamas) members submitted their study to the PLC on the same day, Oct. 13, as they accused the consensus government of failing to execute the tasks entrusted to it since it was formed in June 2014. These tasks include merging the government institutions in the West Bank with those of the Gaza Strip and preparing for the presidential, legislative and local elections as well as the Palestinian National Council elections.

Also, on Oct. 4, the government canceled the local elections that were initially scheduled for Oct. 8. This has pushed the PLC members to call for the return of Haniyeh’s government in order to take action in light of the consensus government’s failure to present its program before the PLC to gain the vote of confidence, in virtue of Article 66 of the Palestinian Basic Law.

The PLC’s recommendation was followed by an official statement issued by Hamas Oct. 16, accusing the consensus government of “reneging on the internal accord between Hamas and factions of the Palestine Liberation Organization to form the 2014 consensus government, and replacing a number of ministers with Fatah leaders — turning it into a Fatah government. For his part, Prime Minister Hamdallah operates as a Fatah official.”

The government responded to Hamas’ statement at the end of its weekly session Oct. 18 and accused the movement of impeding the government’s work in Gaza after refusing to hand over the ministries, the governmental departments and crossings and preventing Gaza’s abstaining employees from going back to their workplace.

The government statement read, “The citizens have the right to know that Hamas is impeding many achievements that could have been made to serve its own interests. The recent reshuffle of ministries and government departments [in Gaza] is proof that it is a de facto government that does not care about the suffering of our people.”

Fatah also refused the recommendation. The movement’s spokesman in Gaza, Fayez Abu Eita, noted in a press statement Oct. 13 that such a step was illegal and deepens the Palestinian division, considering it a call to separate Hamas-controlled Gaza from the West Bank.

He explained that such a call lacks legitimacy in light of a national reconciliation government, which was agreed upon by both Fatah and Hamas, as well as all the Palestinian factions, that signed the Beach Refugee Camp agreement. However, he stressed that Fatah was holding onto the government, considering it the legitimate body that represents all Palestinians, and he called on Hamas to allow the government to operate in the Gaza Strip and carry out its functions in order to alleviate the suffering of Gazans.

Hamas PLC member and head of the PLC’s Security Committee Ismail al-Ashqar told Al-Monitor that the purpose of the study was to search for alternatives because the consensus government is not fulfilling the tasks entrusted to it.

He explained that not only did the consensus government fail to fulfill its tasks, but it even turned into a partisan government, acting on behalf of Fatah and following its orders. He added that the government also failed to present its program before the PLC for the vote of confidence, which violates the Palestinian Basic Law — thus making it an illegitimate government.

Ashqar noted that Haniyeh's government is the only one that gained the PLC’s vote of confidence since the last parliamentary elections in 2006, pointing out that the study will be discussed during the next few days without specifying a date by the PLC and its competent committees.

Yasser Khalaf, the spokesman for the Palestinian Freedom Movement, told Al-Monitor that his movement welcomed the recommendation, saying, “The decision to examine the return of Haniyeh’s government is wise in light of the consensus government’s failure as it only follows the orders of the president of the Palestinian Authority, Mahmoud Abbas, and marginalizes the Gaza Strip.”

Khalaf gave the consensus government an ultimatum — either it fully executes its duties toward Gaza or it resigns. At the same time, he said it would be best to wait for the future steps the PLC will take after examining the demand presented before it.

For his part, Secretary-General of the PLC and legal expert Nafed al-Madhoun, told Al-Monitor, “Although Haniyeh’s government resigned after the Beach Refugee Camp agreement in order to form the current consensus government, it remains the legitimate government that is assigned to conduct government business. This is because the consensus government failed to gain the PLC’s vote of confidence.”

He added, “The consensus government is factional-oriented and does not act according to the national consensus. In addition, no authority is monitoring it — neither the PLC nor any other Palestinian institution,” stressing that the study will be discussed from every legal, political and social aspect before voting on it. Noteworthy is that the PLC has yet to hold a session to discuss the study.

Political analyst Mustafa Sawaf believes that the study was a message to Abbas to tell him that either you order the government to serve all Palestinians or the people of Gaza have the right to find someone else to manage their affairs after the consensus government abandoned them.

Speaking to Al-Monitor, he pointed out that Hamas has several options, including forming a leadership of members from every Palestinian faction to manage the Gaza Strip, or accepting the reality and wait until it has a clearer vision in the future. After that, Hamas could resort to other options to manage Gaza.