Fatah will form government without Hamas

Fatah's Central Committee will form a government composed of PLO factions without Hamas to replace the government of national consensus and prepare for the upcoming legislative elections. 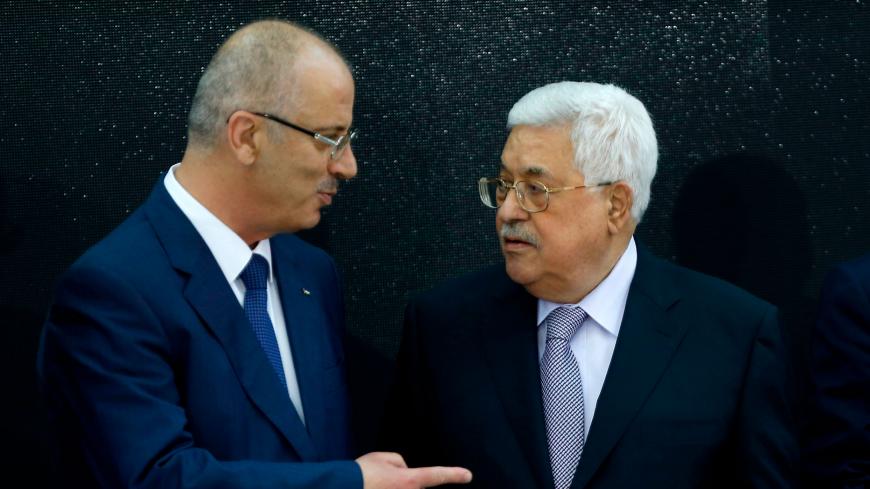 RAMALLAH, West Bank — Palestinian President Mahmoud Abbas announced Jan. 29 his acceptance of the resignation of the government of Prime Minister Rami Hamdallah. The government will keep performing its duties until the formation of the new government.

Hamdallah had offered to step down and put his government at the disposal of Abbas, according to a Jan. 28 statement by his spokesman Youssef al-Mahmoud.

On the same day, the Fatah movement had started consultations with PLO factions to form a new government that excludes its political rival Hamas ruling the Gaza Strip.

Fatah's deputy head Mahmoud al-Aloul told Palestine TV Jan. 27 that the consultations would lead to the nomination of a new prime minister.

This step comes amid the faltering efforts by Hamdallah to achieve reconciliation between Fatah and Hamas. The government reshuffle also follows the Supreme Constitutional Court decision on Dec. 12, 2018, to dissolve the Palestinian Legislative Council (PLC) dominated by Hamas, and hold legislative elections within six months.

Leading Fatah sources told Al-Monitor on condition of anonymity that the Central Committee has stepped up efforts to dissolve Hamdallah’s government since its Jan. 24 meeting headed by Aloul at the official Palestinian presidential headquarters, Muqata. It unanimously adopted resolutions to start consultations on forming a new government from among PLO factions.

The sources said that Fatah wants to name one of its leaders to head the next government, although no specific candidate has yet been agreed upon. “The prominent candidates are Mohammad Shtayyeh, Central Committee member and head of the Palestinian Economic Council for Development and Reconstruction; Saeb Erekat, Central Committee member and secretary of the PLO Executive Committee; and Mahmoud al-Aloul.”

The government of consensus was sworn in on June 2, 2014. All Palestinian factions, including Hamas and Fatah, had agreed on this government under the agreement known as the Beach Refugee Camp Agreement signed at the home of Hamas political bureau chief Ismail Haniyeh in the Gaza Strip on April 23, 2014.

The agreement provided for forming a national consensus government, activating the PLC, reforming the PLO and holding legislative and presidential elections as well as local council elections within six months.

Fatah’s desire to dissolve the current government and form a new government is not limited to the preparation of legislative elections; several Fatah leaders blame Hamdallah’s government for numerous crises that have impacted the lives of Palestinians.

Thousands of private sector employees have been protesting against the controversial Social Security Law passed by the Palestinian Authority last year. Protests flared up when the law entered into force on October 2018. The protests are organized by a committee of private sector workers and trade unions that see the law as unfair and flawed and do not trust the government with the employees’ contributions.

In a parallel development, Minister of Local Government Hussein al-Araj, a Fatah member, attacked Jan. 18 the leaders of the anti-social security movement in the city of Hebron in the southern West Bank. He accused some of the leaders who live in the illegal Jewish settlement of Kiryat Arba near Hebron of being agents for Israel. Araj's remarks infuriated the Palestinian street, and Fatah called for his dismissal.

All this gave Fatah reason to exert pressure to dismiss Hamdallah and his government and push for the formation of a government without Hamas. This would be an opportunity for Fatah to have a government of its own since losing the 2006 legislative elections.

“The Palestinian situation requires a change of government to respond to the demands on the Palestinian street, especially in light of the poor government performance by some ministers,” said Jamal Hawil, a member of Fatah's Revolutionary Council. “All PLO factions must assume responsibility for what is happening,” he told Al-Monitor.

Abdullah Kamil, another member of the Fatah Revolutionary Council, told Al-Monitor that reconciliation with Hamas seems to have reached a dead end. “It is necessary to shift from empowering the government of national consensus to forming a government of national unity to carry out its tasks in preparation for the upcoming elections.”

He said that the next government will be formed mostly from the Fatah movement, PLO factions and some independents. “The new government may see the light soon,” he added.

Abdel-Majid Sweilem, writer and political analyst close to Fatah, argued that the government of national consensus no longer has a raison d’etre.

“A national unity government formed from among the PLO factions is now needed to prepare for the elections,” he said. “Fatah will nominate a prime minister from among its leaders. All options are open when it comes to choosing ministers. The new government may include independents and leaders of the PLO factions.”

PFLP leader Omar Shehadeh told Al-Monitor that any political step, whether elections or formation of a government, that does not serve to end the internal split and repositioning of the PLO is only an escape from the crisis.

He noted, “What is currently being discussed is a change of names; therefore, the new government political performance will not change. Serious steps are required to implement reconciliation. President Abbas ought to call for an urgent meeting of the PLO Development Committee and form a national unity government from all factions, including Hamas, to oversee the general elections.”

DLFP leader Qais Abdul Karim told Al-Monitor, “It is important at the moment to conduct a national dialogue to determine the conditions for holding presidential and legislative elections and ensure their integrity in the West Bank, the Gaza Strip and Jerusalem, with the participation of all forces and factions. An interim government approved by everyone, including Hamas and Islamic Jihad is much-needed. The new government that is currently being raised by Fatah does not meet these conditions.”

According to Article 65 of the Amended Palestinian Basic Law of 2003, the president of the Palestinian National Authority appoints the prime minister to form a government within three weeks as of the date of the appointment. There shall be a right to an extension of a maximum of two weeks. Article 66 provides that the prime minister shall subject his government to a vote of confidence by the PLC. This procedure, however, has not been applied since the rift between the Gaza Strip and the West Bank.