Palestinian prime minister-designate Mohammad Shtayyeh is gearing up to form and head a new Palestinian government after having met with different factions. Will he be able to pull it off? 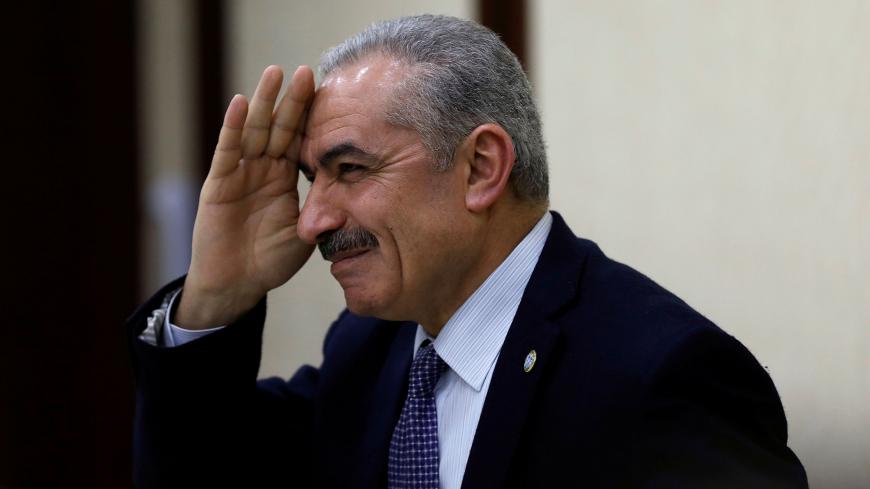 RAMALLAH, West Bank — Some thorny issues lie in store for the new Palestinian government when it emerges this month.

Fatah Central Committee member Mohammad Shtayyeh, whom President Mahmoud Abbas has chosen to lead the new government, is expected to take over soon as prime minister. He has wrapped up consultations with many Palestinian factions, seeking their participation, but shunned Hamas.

Ahmed Majdalani, a member of the PLO Executive Committee and secretary-general of the Palestinian Popular Struggle Front, told Al-Monitor his party will be part of the upcoming government.

Abbas sent his recommendations for the new government's priorities to Shtayyeh last month. Abbas stressed the need to restore national unity and put an end to the internal division — though many observers fear his agenda will have the opposite effect. Other priorities include holding legislative elections in the West Bank, Jerusalem and the Gaza Strip; supporting the families of prisoners and those killed in fighting Israel; strengthening the steadfastness of Palestinians in the face of Israeli policies; defending Jerusalem; continuing to build Palestinian state institutions; and promoting partnership among the public, private and civil sectors.

These goals are in addition to following up on decisions of the PLO Central Council and its Palestinian National Council, determining political, economic and security relations with Israel, as well as setting forth steps toward disengaging from the Paris Economic Protocol.

The protocol, signed in 1994, was designed to regulate Israeli-Palestinian economic relations in the West Bank and Gaza during the transitional phase of the Oslo Accord, and was supposed to end in 1999. But it did not end and the protocol is still enforced.

Back in March 2015, the PLO Central Council decided to define relations with Israel politically and economically and stop all security coordination with it. In October 2018, the council reiterated the same decision, which still remains unimplemented. Meanwhile, the Palestinian National Council had decided in May 2018 to direct the Executive Committee to stop recognizing Israel until Israel recognizes the State of Palestine according to 1967 borders — another decision that has yet to be carried out.

Majdalani added that the upcoming government has to address the widening gap between Palestinians and the political authorities by taking a series of practical measures and restoring the people’s confidence. Majdalani believes the government will have to improve its performance during its first 100 days in office, and review the laws that were hurriedly passed by previous governments, including tax laws, in a bid to ease economic pressure on the public.

The PFLP, on the other hand, refuses to take part in the government, while the DFLP has set a series of preconditions for Abbas and Fatah before it will join.

Fatah rival party Hamas said in a March 10 statement that forming a new government without a national consensus is tantamount to “a unilateral decision" and a bid to evade "solutions for reconciliation and unity."

"This would be a step toward separating the West Bank and Gaza and consolidating the division," the statement said.

DFLP Deputy Secretary-General Qais Abd al-Karim told Al-Monitor, “This anticipated government will not be a solution to the Palestinian crises, whether with regard to Israel or at home.”

He added that any upcoming government must seek to end the division, implement the reconciliation agreements and create a national consensus on holding legislative and presidential elections, which require a consensual transitional government tasked with holding elections.

“We called on Shtayyeh to implement the decisions of the PLO’s national and central councils with regard to determining the relations with Israel and stop the security coordination, and to review the Paris Protocol, protect the citizens’ democratic rights and freedoms and to adopt an economic policy that would take into account the popular demands,” Abd al-Karim said.

“As things stand now, it seems the government would be formed according to Fatah’s vision exclusively, without any consideration for national unity and the participation of all factions. I don't think it will be able to meet any of the national requirements or implement Abbas’ recommendations, especially when it comes to holding elections. This requires a government accepted by all factions,” he added, in reference to Hamas.

PFLP leader Omar Shehadeh told Al-Monitor that the government that is being formed will be unable to tackle current problems. “We fear that this government will be a step toward deepening the internal split," he said. "The upcoming government is politically and economically troubled and does not represent us.”

Shehadeh explained that the new government will be judged by its ability to fight corruption and implement the decisions of the PLO national and central councils, stressing that this government will either pave the way for the separation between the West Bank and Gaza Strip or end the division.

Wasel Abu Yusuf, secretary-general of the Palestinian Liberation Front, told Al-Monitor the new government should have one main role, which is to confront Israeli attempts to impose a new status quo in the Palestinian territories through building new settlements.

He also believes the government ought to ban Israeli goods from entering the Palestinian market, support the boycott, divestment and sanctions (BDS) movement, thwart the establishment of a separate state in the Gaza Strip and implement Abbas’ recommendations for the new government.

Fahmi Shahin, a member of the Palestinian People’s Party political bureau, told Al-Monitor his party presented its vision to Shtayyeh, stressing the need for a change in the government’s public affairs management. He believes the government should serve as a tool to execute PLO decisions, strengthen the popular resistance, work on ending the division, implement reconciliation agreements, prepare for the presidential and legislative elections and ensure social and economic rights.

The new government seems to be looking at a long, bumpy road ahead and a seemingly impossible task to achieve — ending the division — as was the case for the governments that preceded it.