Palestinian leaders' confused messaging over next steps with Israel

Some say President Mahmoud Abbas' announcement that the Palestinian Authority is ending agreements with Israel is nothing but a leap in the dark, while PA officials stress that the decision represents the beginning of a new phase. 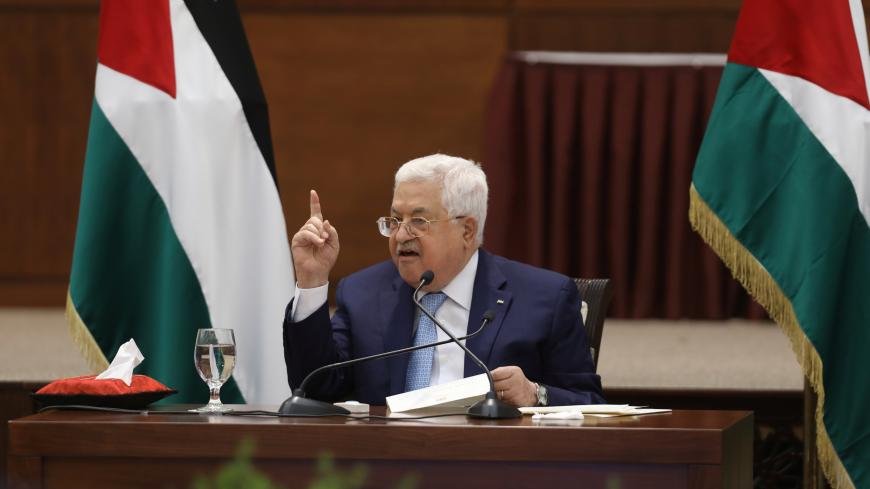 Palestinian President Mahmoud Abbas speaks during a leadership meeting in Ramallah, in the Israeli-occupied West Bank, May 19, 2020. - Alaa Badarneh/Pool via REUTERS

RAMALLAH, West Bank — May 20 was no different than any other day for Palestinians, without any concrete changes following the May 19 announcement of President Mahmoud Abbas that all agreements signed with the United States and Israel were being ended. The statement was made at a meeting of the Palestinian leadership to discuss options for responding to Israeli government plans to annex parts of the West Bank.

“The Palestine Liberation Organization and the State of Palestine are absolved, as of today, of all the agreements and understandings with the American and Israeli governments and of all the obligations based on these understandings and agreements, including the security ones,” Abbas declared at a Palestinian leadership emergency meeting in Ramallah.

“The Israeli occupation authority, as of today, has to shoulder all responsibilities and obligations in front of the international community as an occupying power over the territory of the occupied state of Palestine, with all its consequences and repercussions based on international law and international humanitarian law, particularly the Fourth Geneva Convention of 1949,” Abbas added.

Israel’s Public Broadcasting Corporation, also known as Kan, quoted an anonymous Palestinian official May 20 as saying that Abbas had ordered the heads of his services to immediately stop security coordination with Israel, specifically two figures who have regular contacts with the Israeli side: the head of the Palestinian Authority’s (PA) General Authority of Civil Affairs, Hussein al-Sheikh, and the director of the Palestinian Intelligence Service, Maj. Gen. Majid Faraj. But the website said no other practical changes in this field were noted.

Also on May 20, the newspaper Israel Hayom quoted a Palestinian official as saying Abbas’ announcement to end agreements with Israel was only declarative.

But Azzam al-Ahmad, a member of Fatah’s Central Committee, told Palestine TV on May 20, “Everything that the Oslo Accords entail, including security coordination and the Paris Economic Protocol, is a thing of the past,” indicating that all have become null and void.

In response to the president's decision, the government held an emergency meeting the evening of May 20 to discuss the implementation of the decisions that Abbas had taken regarding the relationship with Israel and the United States. During the meeting, Prime Minister Mohammad Shtayyeh ordered all ministries to take urgent and practical steps to implement the Palestinian leadership’s decisions.

Some say the PA's announcement that it is absolved of all the agreements is a leap in the dark, as there is no clear-cut Palestinian plan for how to dissolve the agreements with Israel, most notably the Oslo Accords concluded on Sept. 13, 1993, in virtue of which the PA was established.

Since 2015, the PA has threatened to suspend agreements with Israel and the PLO’s Central Council has taken decisions to stop security coordination, but throughout these years no serious steps have been taken to implement those decisions; also, there have been no visible alternatives to the coordination. Until Abbas' declaration, security coordination was at its best, and the same applies to civilian coordination in all its fields, be it in commercial exchange, supplying electricity and water and collecting clearing money.

Some Palestinian factions doubt the PA’s ability to implement important decisions in response to the Israeli annexation plan, as both the Islamic Jihad and Hamas refused to participate in the leadership meeting held May 13 to discuss ways to respond to the proposed annexation.

Hamas said in a statement that confronting this Israeli project through a meeting in Ramallah was a smokescreen and a waste of precious time during which the plot against the Palestinian people thickens; Hamas also considered the meeting to be a repetition of experiences that have proved unsuccessful.

The Islamic Jihad said it would not attend the meeting as it believes the correct way to confront annexation and settlements is through holding a gathering of the PLO’s leadership in the presence of the Palestinian president and faction leaders.

Meanwhile, Omar Shehadeh, the representative of the left-wing Popular Front for the Liberation of Palestine, withdrew from the May 19 meeting, rejecting Abbas’ statement, which also stressed the Palestinian leadership’s commitment to negotiations with Israel under international auspices and through an international peace conference.

Shehadeh told Hadf News that Abbas’ proposal does not constitute a response to the Israeli government's policies and the US Mideast peace plan, also known as “the deal of the century.”

Shehadeh said the statement Abbas read to the media was not discussed during the meeting, stressing that it falls into the quagmire of negotiations and keeping the doors open to them; Shehadeh said this is dangerous since Abbas keeps going in circles, betting exclusively on the international community.

The deputy secretary-general of the Democratic Front for the Liberation of Palestine, Qais Abd al-Karim, who attended the May 19 meeting, told Al-Monitor, “If there is a political will, these decisions can be implemented based on a comprehensive Palestinian national unity that strengthens the elements of confronting Israel and the US administration.”

He added, “What happened did not meet our aspirations,” referring to Abbas’ statement, noting, “We believe that the annexation process, which [Israeli Prime Minister Benjamin] Netanyahu said he intends to do, requires us to start the implementation process, and take concrete, specific steps, such as ending security coordination and the Paris Economic Protocol.”

Abd al-Karim pointed out that a national strategy is now required to push Israel to look for a political solution, and this calls for a confrontation at various levels, but it will be a costly one and may harm the interests of social groups that have major economic and social privileges, and which play a role in influencing the PA and discouraging it from carrying out its decisions.

Ghassan al-Khatib, a former Palestinian planning minister and a former director of the government media office in Ramallah, told Al-Monitor this is the first time that Abbas had used the language he did in his speech; Khatib said the Palestinian position is not an escalation but rather a result of Israeli policies that abolished the implementation of all agreements.

“Terminating agreements does not mean ending and dissolving the PA, because it has become a reality and an important achievement for the Palestinian people,” Khatib added.

He said Israel is dragging the PA away from cooperation and into conflict. He also said the announcement that security coordination is stopping does not harm Israel but would rather be painful to the PA, which he said benefits from it more than Israel does.

Khatib said that what hurts Israel is real and daily confrontations on the ground, because such activities are what stop the settlement project and land grab by settlers.