Is there any role left for PLO in determining future Palestinian-Israeli relations?

Questions arise about the PLO’s ability to implement the decisions of its Central Committee to end the security coordination with Israel. 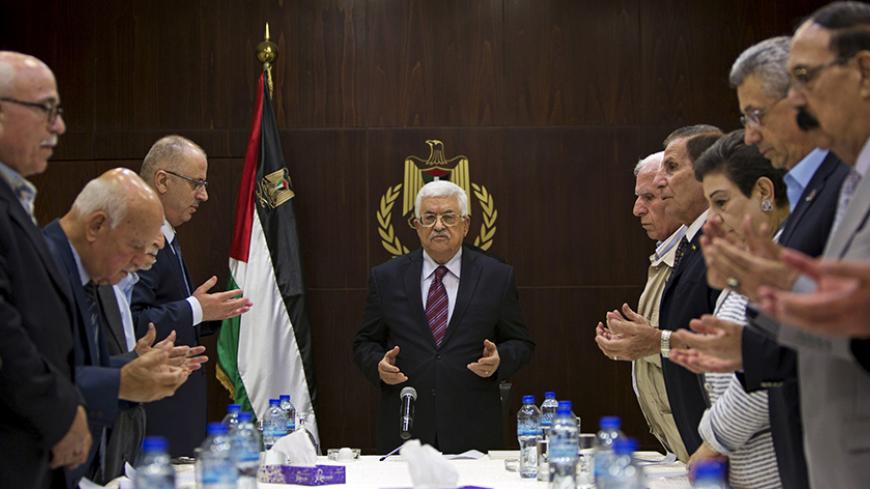 Palestinian President Mahmoud Abbas (C) joins a reading of the Quran prior to a meeting of the Palestine Liberation Organization Executive Committee in the West Bank city of Ramallah, Aug. 22, 2015. - REUTERS/Majdi Mohammed

RAMALLAH, West Bank — The Palestine Liberation Organization’s Executive Committee adopted Nov. 4 the recommendations of the Political Committee — which is affiliated with the Executive Committee and comprises some of its members — to determine the security, political and economic relations with Israel. The PLO is now faced with a challenge to implement these recommendations on the ground, and questions are raised about its ability to oblige the Palestinian Authority and its institutions to abide by them.

This challenge became clear after the PLO failed to apply the binding decisions of its Central Council on March 5 — most importantly the decision to “hold Israel accountable for its responsibilities toward the Palestinian people in occupied Palestine, as an occupying power under international law; and [the decision] to end the security coordination in all its forms with the Israeli occupation authority in light of the lack of commitment to the agreements signed between the two.”

Eight months after the Central Council issued those decisions — which have yet to be implemented — the most important question remains about the PLO's ability to implement the Political Committee’s recommendations on the ground, as well as the alternative political action that it would adopt should it be able to implement the decisions.

Tayseer Khaled, a member of the PLO’s Executive Committee, told Al-Monitor, “The Executive Committee is obliged to implement the decisions the Central Council took in March, as well as the Political Committee’s recommendations, and it is capable of doing so.”

However, implementing those decisions means not abiding by all security, political and economic agreements between the PLO and Israel, signed since the Oslo Accord in 1993. This requires detailed plans for implementation, but those plans are not ready yet.

Omar Shehadeh, a member of the PLO’s Central Council, told Al-Monitor, “The decisions adopted by the Executive Committee are originally binding decisions issued by the Central Council but are yet to be implemented. This points to a state of impasse and procrastination in implementing these decisions, especially when it comes to ending the security coordination. The situation on the ground proves otherwise, as this coordination with Israel has not stopped in the past few weeks despite the ongoing intifada — while the economic coordination also continues. This raises fears among Palestinians about the existence of other undeclared agreements between the PA and Israel.”

He said, “The PLO is capable of implementing the decisions should it rely on the public, and the Palestinian factions and forces. However, the PA’s current political maneuvers — such as announcing its readiness to return to the negotiation table — are dangerous and could ruin its future should it not respond to the popular intifada.”

Writer and political analyst Ahmed Rafik Awad told Al-Monitor, “The PA might find itself forced to take certain decisions that would go in line with the popular intifada that has been ongoing since early October. These decisions will also put an end to the stagnation and threats of ending the agreements with Israel and determining the [nature] of the economic and security relations — without actually going through [with these threats].”

He added, “The Palestinian people are raising questions about the PA’s position regarding the intifada. This is why it might find itself forced to take a risk and make partial — not complete — decisions because it cannot keep the same position.”

The PLO is well aware that implementing these decisions would push the US administration, the international community and Israel to take punitive steps against it, which raises questions about its ability to cope with such pressure.

For his part, Amira said, “Yes, there will be US and Israeli pressure on the PA. I believe Israel would resort to [punitive] measures in form — not in essence — since it controls all cities in Palestine.”

However, Shehadeh thinks otherwise. He said, “We have our doubts concerning the Palestinian leadership’s strength in facing international and Israeli pressure, as some within the PA have political and economic interests.”

Member of the PLO Executive Committee Ahmed Majdalani told Al-Monitor that Washington and Israel are expected to put pressure on the PA. He said that they have already started, as “the US State Department issued a decision in late October to end the aid provided for the PA’s general budget. We are used to such pressure and we will not accept it.”

Khaled added that the success or failure of international pressure depends on “the strength and solidity of the PA’s position, as well as its ability to recruit a network of connections and relations with world countries.”

According to Majdalani, although none of these decisions have been implemented, the Political Committee has prepared a political program for the next stage based on the Central Council’s decisions issued on March 5 and President Mahmoud Abbas’ speech at the United Nations on Sept. 30.

“Although the details of the political program for the next stage have not been discussed yet, the outlines focus on reforming the internal Palestinian situation as soon as the PLO ends the signed agreements with Israel; exerting internal efforts in parallel with the Palestinian political action at the UN; forming a national unity government with the participation of all political parties; preparing for the National Council’s session; and revoking the PA’s recognition of Israel and linking [this recognition] to Israel by recognizing the Palestinian state along the 1967 border,” Majdalani said.

A poll carried out Nov. 6 by the Arab World for Research And Development showed that 64% of those who participated in the poll support canceling the Oslo Accord, while two-thirds believe that the PA will not end its commitment to the agreement, especially with regard to ending the security and economic coordination and the dissolution of the PA itself.

Palestinians have doubts about the PLO’s ability to make important decisions to determine the relationship with Israel, including ending the security and economic coordination and canceling the Oslo Accord — in light of its weakness and declining role before the PA — despite its constant threats to do so.