How this Palestinian committee works to end agreements with Israel

A Palestinian committee is currently reviewing ways to end all agreements signed with Israel and break economic ties, but Palestinians are wary of such efforts as President Mahmoud Abbas has repeatedly failed to put his promises into action. 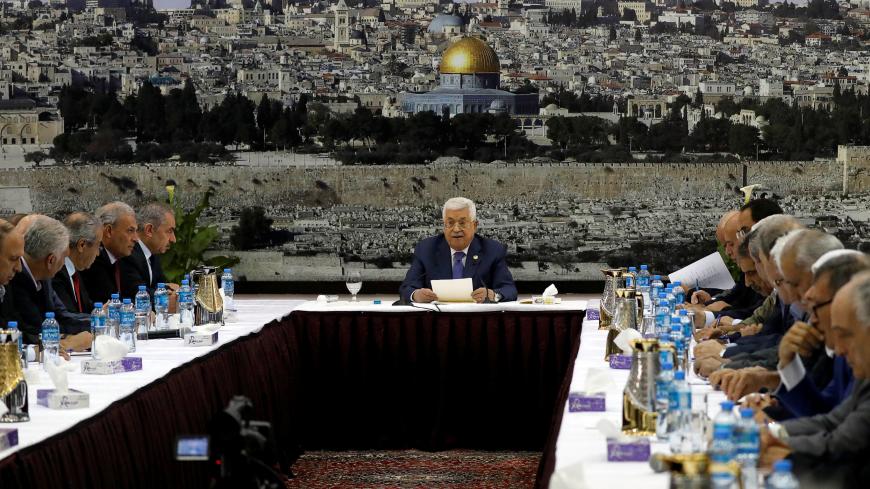 GAZA CITY, Gaza Strip — The Palestinian committee charged with setting up mechanisms to stop agreements with Israel is working through legal, economic and political tracks to achieve its purpose, a committee member told Al-Monitor on condition of anonymity.

The committee, which comprises 14 Palestinian leaders from the PLO factions, held its first meeting in Ramallah Aug. 3, chaired by President Mahmoud Abbas, to discuss the mechanisms of implementing the Palestinian Authority's (PA) decision taken on July 25 to suspend agreements signed with Israel. This comes in response to Israel demolishing dozens of Palestinian homes in areas under the PA’s administrative control in East Jerusalem on Oct. 22.

“The committee has taken a decision to refrain from talking to the media [about its functions and method of work] until we reach final results,” Qais Abdul Karim another committee member, told Al-Monitor.

However, the committee member who agreed to speak on condition of anonymity noted, “The committee’s task is to put in place executive mechanisms [to implement] the decision to stop agreements with Israel, the most important of which is the first Oslo Accord of 1993, which included the PLO's recognition of the State of Israel; and the second Oslo Accord in 1995, which divides administrative and security control in the West Bank between the PA and Israel; in addition to the 1994 Paris Economic Protocol, which defines the economic and commercial relationship between the PA and Israel.”

On July 22, the Palestinian government announced that it no longer believes in the West Bank divisions and considered all West Bank territory under PA control.

Speaking about the legal process on which the committee is working, the source explained that it would recommend to the PA to convene an international conference under the auspices of the Middle East Quartet calling for the implementation of all international resolutions and legislation in favor of Palestine.

He said these include most importantly the UN General Assembly Resolution of Nov. 29, 2012, which granted Palestine the status of observer state at the United Nations and called for the withdrawal of the Israeli army from the Palestinian territories occupied in 1967, including East Jerusalem.

The committee will also recommend that the PA should exert sufficient pressure at the international level to activate and implement Security Council Resolution 2334 of December 2016, he added, which condemns the settlements and calls for putting an end to them in the occupied Palestinian territories.

“The committee is [also] considering its option to end the importation of Israeli goods and rely on Arab goods instead, by expanding trade partnerships between Palestine and all Arab countries,” the source said about the committee’s economic track, pointing out that the volume of Palestinian imports from Israel exceeds $4.5 billion annually.

As for the political track, he said, “The committee will recommend that the PA deals with all West Bank territories the same, without any discrimination, in the sense that there will be no Palestinian acceptance of any Israeli administrative or security control over the entire West Bank.”

The source added that this would be done by strengthening the popular resistance against the Israeli occupation and enhancing the steadfastness of Palestinians in Area C, which is under Israeli security and administrative control, by pushing forward hundreds of economic and development projects in these areas.

“The committee will hold several future meetings before submitting its recommendations as soon as possible to President Abbas, who will announce the results to the public,” the source said.

Palestinians are concerned that this committee might not achieve concrete results since the PLO has previously issued several decisions on the Palestinian relationship with Israel, but not one was ever applied.

The most prominent of these decisions include the decision to stop the security coordination adopted by the PLO’s Central Council on March 5, 2015. On Jan. 15, 2018, the council reaffirmed the same decision and withdrew the recognition of Israel. The council then decided on Oct. 29, 2018, to end all PLO obligations toward its agreements with Israel.

Hamas leader Yahya Moussa told Al-Monitor, “Abbas is great at making empty threats. We have a clear experience in this regard in light of the failure to implement all previous decisions by the PLO’s Central Council.”

He explained that the PA has not stopped security coordination with Israel so far, adding, “We believe that as long as this situation continues, there will be no end to the Israeli occupation of the West Bank.”

Moussa called for the need to give the people the green light to confront the Israeli army in the West Bank, pointing out that this is the best Palestinian reaction to the continued Israeli occupation.

Ahmed Rafiq Awad, a professor of journalism and political science at Al-Quds University, told Al-Monitor, “The committee will face many complications that might impede the plan to make applicable decisions — notably Israel’s control of all West Bank outlets to the world and at the borders — in addition to its control over 60% of the West Bank’s total area.”

He added, “This makes it very difficult for the PA to open up to the world and find alternatives to agreements with Israel.”

Awad stressed that the most important agreement that must be stopped is the Oslo Accord, adding, “I do not think that we can be liberated from the occupation as long as this agreement remains in place, because it gives Israel the right to control the borders and part of the West Bank.”

Abdel Sattar Qassem, a professor of political science at An-Najah National University in Nablus, told Al-Monitor, “The Palestinians are used to hearing statements from Abbas without seeing actions [on the ground]. This belief is deepened in the absence of any actual action by Abbas to end any agreement with Israel so far.”

Qassem pointed out that talking about a real cessation of agreements with Israel without stopping security coordination and withdrawing recognition of Israel “is mere empty talk.”

Qassem expects the Palestinian-Israeli conflict to witness further confrontations, violence and tension. “With the efforts to stop the agreements between the PA and Israel, I believe that peace between the two parties is distant,” he said.

by Ismail BELLAOUALI with Philippe AGRET in Rabat and Marie GIFFARD in Madrid | AFP | Jun 24, 2022
END_OF_DOCUMENT_TOKEN_TO_BE_REPLACED