Reform of the Palestine Liberation Organization remains at an impasse among the various Palestinian factions as pressure builds against Palestinian President Mahmoud Abbas. 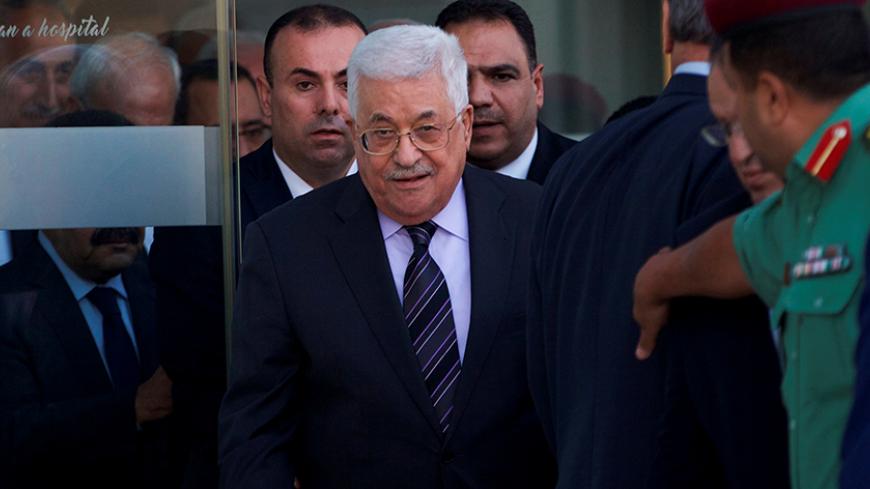 GAZA CITY, Gaza Strip — The Palestinian street is currently preoccupied with the issue of reforming the Palestine Liberation Organization, one of the main points stipulated in all the Palestinian reconciliation agreements that both Fatah and Hamas accepted. The PLO, which was founded in 1964, is considered the sole legitimate representative of the Palestinian people domestically and abroad.

The latest reconciliation agreement, which was sealed in April 2014 and is known as the Beach Refugee Camp Agreement, calls for establishing a Temporary Leadership Framework for the PLO within five weeks of the signing of the agreement. The framework would facilitate discussion of ways to reform the PLO and its mechanisms and prepare for the elections of the Palestinian National Council (PNC), the legislative body of the PLO. However, the framework has yet to be enacted.

This issue remains a source of dispute among the various Palestinian factions, as no steps have been taken in this regard to this day. The stalemate has raised many important questions: Why does Palestinian President Mahmoud Abbas refuse to activate the PLO’s Temporary Leadership Framework? And what is Hamas seeking to achieve through the PLO reform?

In a speech at the fourth Palestinian National Security Conference in Gaza on Nov. 2, Khaled Meshaal, head of Hamas’ political bureau, urged the parties to work on reforming the PLO and restore its role as representative of the Palestinian people.

Meshaal denied talks that his movement is seeking to take control of the PLO, saying, “No one has the right to dominate the PLO. We are partners in sharing responsibility and in [preserving] the nation.” He stressed the need to form a common and unified authority for all Palestinians at home and abroad.

The PLO is made up of 10 Palestinian factions, most prominently Fatah, but others refuse to join: Hamas, which scored a major victory in the 2006 legislative elections, and the Islamic Jihad movement. They resist joining because the organization had recognized the State of Israel in September 1993 and its right to live in peace and security, a position both movements reject.

Hamas leader Yahya Moussa told Al-Monitor, “The PLO was created to realize the hopes of the Palestinian people to achieve independence and freedom. But it has reached an impasse today and turned into a body devoid of any content as it lacks a unified political program. Its current political program is based on negotiations with Israel on a two-state solution. Hamas, which won the last legislative elections, is not part of the PLO, and thus the latter is not a representative of the Palestinian people.”

Moussa added, “This is why the organization needs to be rehabilitated, which is what we mean by reforming the PLO. This should be done according to a comprehensive process that tackles the structure of the PLO, its institutions, its political programs and its strategies, and that adopts all forms of resistance against the occupation, especially the armed resistance.”

He explained that Hamas has yet to join the PLO as “the key to the organization is in the hands of Abbas, who does not want to include us in it because we are a major force. He wants to maintain his monopoly over the small powers inside the organization so he can have the last say. This explains why Abbas refuses to call for the establishment of the PLO’s Temporary Leadership Framework.”

Wasel Abu Youssef, a member of the PLO’s Executive Committee, said the organization welcomes all Palestinian factions without exception, as the sole legitimate representative of the Palestinian people.

Abu Youssef told Al-Monitor, “The call to reform the PLO is a good and positive one as we need to include [all Palestinian] factions and agree on a unified national strategy to resist the occupation. But there are many obstacles hindering the PLO’s reform process as per the Fatah-Hamas reconciliation agreements, mainly Hamas’ refusal to allow the national consensus government to operate in the Gaza Strip and to hand over management of the Gaza crossings to the Palestinian Authority.”

Walid al-Mudallal, a political science professor at the Islamic University in Gaza, believes Hamas is trying to change some of the PLO’s policies, about which Abbas is making unilateral decisions.

Mudallal told Al-Monitor, “The PLO lost its influence on the Palestinian political scene, while Abbas controls it and does not implement the organization’s decisions that contradict his policies. This is why Hamas is seeking to turn the PLO into a home for all Palestinians, and into an organization whose decisions are binding to all. Thus, the inclusion of Hamas and the rest of the Palestinian factions in this organization is considered a Palestinian reformist action.”

Among the PLO’s decisions that have yet to be implemented is the 2015 Central Committee decision to end the security coordination with Israel, which it accused of ignoring agreements signed with the PA such as the 1994 Paris Protocol. However, this decision was never put into effect.

For his part, political analyst Hassan Abdo confirmed that the reform of the PLO is not a demand by Hamas alone, but shared by most Palestinian political forces such as the Islamic Jihad and the Palestinian Front for the Liberation of Palestine. This, he said, is because the PLO does not reflect the real policies and ambitions of the political forces.

Abdo told Al-Monitor, “The reform of the PLO means turning it from an institution of individual decisions into an institution that is based on political partnership. This explains why Abbas refuses to activate the PLO’s Temporary Leadership Framework that paves the way for a reform process.”

Mudallal agrees with Abdo on this point, saying, “Abbas fears that Hamas will pull the rug from under his feet within the organization and thus threaten his monopoly over Palestinian political decisions.”

He added, “Abbas is also concerned about Hamas’ presence inside the PLO, which would allow it to participate in the elections of the PNC — which is in charge of drafting the policies and programs of the PLO — and to reverse some of the PLO’s policies, mainly ending its recognition of the State of Israel.”

However, Abu Youssef ruled out the possibility that Hamas will reverse the PLO’s policies even if it obtains seats within the PNC. He explained, “No faction alone can rule the PLO since it is an organization that includes representatives of all factions that are part of it. The decisions of the PLO are subject to the vote of the representatives of these factions, and are not made by one faction alone.”