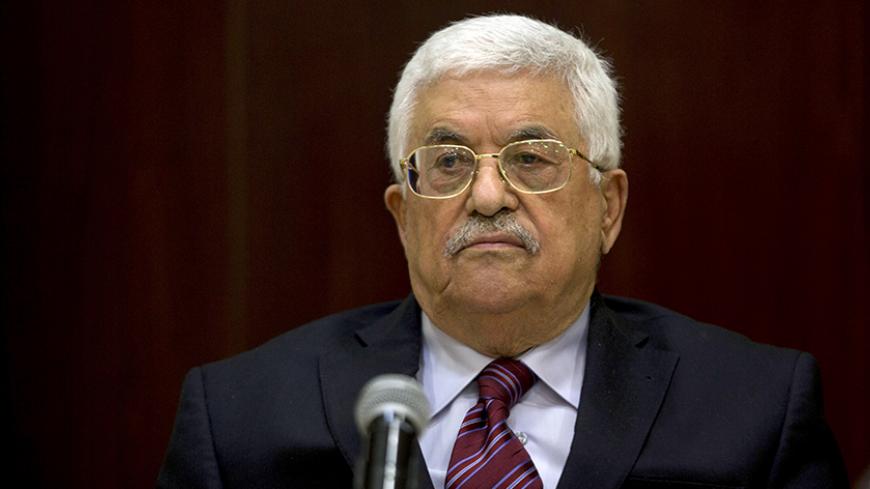 The lead story Sept. 9 in the Ramallah-based pro-PLO daily Al-Ayyam summarized what had been happening since the unexpected Aug. 22 resignation of Palestinian President Mahmoud Abbas as chairman of the Palestine Liberation Organization and nine members of the PLO’s Executive Committee. In short, the article detailed the increasing calls to postpone the planned Sept. 14 meeting of the Palestinian National Council, identifying all the relevant Palestinian factions that had sent written requests to Salim Zanoun, speaker of the PNC, calling for a delay. Three of Al-Ayyam's five main opinion columns reflected on what had happened and why postponement was necessary to avoid a much deeper split among the Palestinians.

The writing on the wall had begun to appear weeks earlier, when Zanoun, also a former judge and prominent Palestinian jurist, voiced his opposition to efforts by the Executive Committee to manhandle the PNC. On Aug. 24, Zanoun had rejected moves by Saeb Erekat, head of the PLO’s Negotiations Affairs Department, and by Abbas to apply Clause 14-c of the PLO bylaws, which allows for a meeting of the PLO’s highest legislative body without a quorum in the case of a “force majeure.”

Meanwhile, on Sept. 7, Khaled Meshaal, head of Hamas’ political bureau, responded with an initiative citing the need to prepare for the PNC meeting, which he suggested be held in a location where all PNC members could attend, away from Israeli pressures and the travel restrictions imposed by the occupation. That same day, the PLO Executive Committee met, agreed to request a postponement and signed a letter to Zanoun to this effect.

Executive Committee member Hanan Ashrawi explained in an email to Al-Monitor the reason for the request. “We wrote to PNC speaker Zanoun, asking for a postponement to do sufficient preparation,” she said, adding that a preparatory committee needed to be established “to work on a political agenda and strategy.” Ashrawi further said that the PNC leadership must “work out steps for reunification so all can join, to prepare for real elections to rejuvenate and revitalize the PLO and all its institutions.”

While the public call by Meshaal and the Executive Committee’s letter made the headlines, the real reasons behind the cancellation of the PNC meeting lay elsewhere. Ahmad Saadat, head of the Popular Front for the Liberation of Palestine, sent a letter from prison, received by Zanoun Sept. 8, in which he too called for a postponement. On Sept. 5, members of the PFLP leadership had held a press conference in Beirut announcing that the PFLP would boycott the planned PNC meeting.

Saadat's letter and the PFLP's boycott announcement were huge. The PFLP is the second-largest faction in the PLO. The leftist guerrilla group has traditionally been quite loyal within the PLO, typically going along with majority decisions. The PLO has rarely held a meeting without the PFLP being represented. The group's absence would have dealt a blow to the Fatah leadership’s ability to muster some semblance of national unity.

Possibly even more significant than all of the above, however, is the internal debate within the dominant Fatah movement. Tawfiq Tirawi, former head of Palestinian intelligence and a member of Fatah's Central Committee, said in a Sept. 6 interview that there is a major internal struggle over which Fatah members will be nominated to the PLO Executive Committee. Fatah is scheduled to hold its long-awaited seventh congress on Nov. 29, and its leaders prefer to leave the nominations until after the congress.

At a press conference Sept. 9 in Ramallah, Zanoun announced that after consultation, “We officially announce the postponement of the PNC session and the beginning of needed discussions with a preparatory committee, in order to convene a regular session of the PNC within three months.” In making the decision, Zanoun had focused on the need for wide-ranging meetings and the necessary preparations in the coming weeks and months to prepare for a proper, regular gathering of the PNC with the ability to develop a new strategy for the Palestinian movement.

The problematic issue of unity prevailing before the postponement is unlikely to be quickly resolved, but what has become crystal clear is that Abbas — the aging Palestinian president and PLO chairman — is not nearly as strong or powerful as he once was. Erekat, as Abbas’ sidekick, is also emerging as one of the big losers in the current power struggle.

The postponement, against Abbas’ wish, is the best proof that the long-awaited transition of power in the Palestinian leadership is finally upon us. What remains unknown is which individual or group of individuals will emerge as the new leadership.