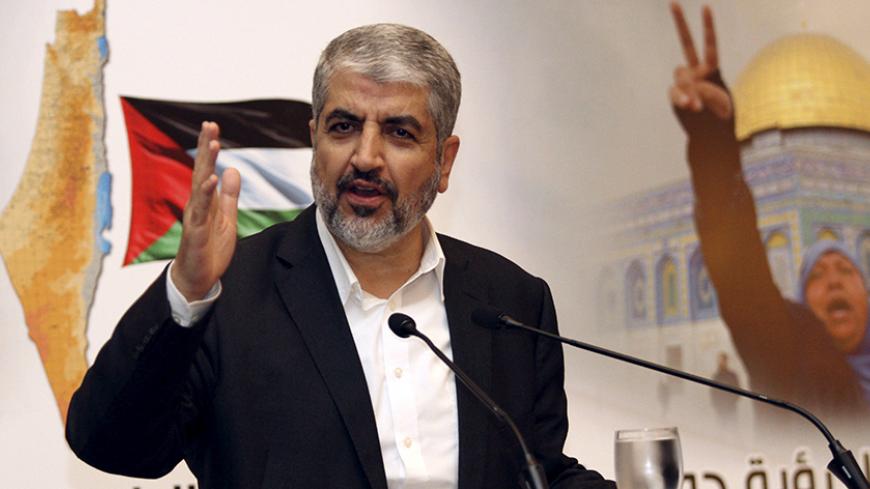 Hamas leader Khaled Meshaal is presenting a national initiative designed to overcome the current Palestinian crisis through a united front and decision-making by consensus.

In support of those goals, Meshaal called Sept. 7 for postponing the Palestinian National Council session that was set for Sept. 14, arguing that if Fatah alone held the session, it would deepen the Palestinian divide and would not give the Palestinian Liberation Organization greater legitimacy. In his speech from Doha, Qatar, Meshaal said it would be absurd if the meeting did not include Hamas and the Palestinian Islamic Jihad.

Meshaal, head of Hamas' political bureau, had contacted PNC Chairman Salim Zanoun on Aug. 31 to try to prevent the session from being held. During a press conference Sept. 9 in Ramallah, Zanoun indeed announced the postponement of the PNC session for a period of no more than three months.

In between, Meshaal said, he also asked PLO Executive Committee Secretary Saeb Erekat in Doha to convey a message to Palestinian President Mahmoud Abbas to postpone the PNC session.

Al-Monitor learned from prominent Hamas sources, who wished to remain anonymous, that Meshaal’s speech was decided following consultations between the Hamas leadership at home and abroad, and after receiving information from the Palestinian Authority that Abbas was going through with his decision to hold the session. It seems Abbas ignored Hamas’ calls to postpone it. Thus, Meshaal sought to clarify Hamas' position before the Palestinian public, as the movement feared Abbas would ignore Hamas in this crucial historical stage.

Hamas spokesman Ismail Radwan explained to Al-Monitor that Meshaal was speaking of a political vision to unify the Palestinian ranks, achieve reconciliation and renew national decision-making through consensus. This could happen, he said, through a meeting for the PLO’s temporary leadership and the Palestinian Legislative Council, and by overseeing implementation of the reconciliation agreement Hamas and Fatah signed in April 2014. Also, the groups need to agree "on forming a government of national unity and starting a comprehensive dialogue to build a consensual national strategy.”

Radwan added, “If Abbas seeks reconciliation with Hamas, he should accept the vision that Meshaal presented in his speech." If Abbas continues to practice exclusivity in decision-making, the divide will deepen "and take away what is left of his run-down legitimacy."

"It would be Hamas’ right to consider alternative options through consultations with the rest of the resistance movement,” Radwan said.

Fatah seems divided in its evaluation of Meshaal’s speech.

“Meshaal’s speech is paradoxical and did not break new ground, nor did it bring a serious proposition to help the Palestinian people overcome its crises, of which Hamas was one of the main causes,” Fatah spokesman Ahmed Assaf noted Sept. 8.

Abbas Zaki, a member of Fatah’s Central Committee, told Al-Monitor, “Meshaal’s speech was positive and reflects Hamas’ perception for the time being, and [it shows] the magnitude of the threat facing the Palestinian cause in the future. What he [Meshaal] put forward represents a consensus between the Palestinian forces, but it needs practical steps that could be interpreted on the ground.”

It has been a little over a year since Meshaal’s last speech, in which he spoke about the results of the Israeli war on Gaza in the summer of 2014.

Meshaal may not want to restrict Hamas in any future steps the movement might take regarding Abbas, such as calling for the establishment of a new political entity to replace the PLO — although not officially announced — and a demand for regional mediators to prevent Abbas from further monopolizing the Palestinian political decisions.

Meshaal may have also meant that Hamas’ options — which are mostly difficult — remain open, which will make the situation even more difficult for Palestinians. Hamas has yet to find a wide Palestinian alliance against Abbas. Hamas’ criticism is limited to statements and protests, without posing a real threat to Abbas’ political path.

After Meshaal’s speech was over Sept. 7, Hamas issued a memorandum of its vision to overcome the current crisis in the Palestinian arena, a vision that called for “postponing the PNC session and holding a meeting for the temporary leadership framework of the PLO and the PLC in any Arab capital, as well as forming a national unity government to run the Palestinians’ affairs in a spirit of consensus, in addition to holding the PNC’s presidential and legislative elections, and strengthening the partnership between the Palestinians in the management of the national decision.”

In his speech, Meshaal also addressed the truce in Gaza, saying, “The cease-fire negotiations did not reach a conclusion, but the truce with Israel would be confined to Gaza that is suffering the wars. The ongoing siege will turn Gaza into a ticking time bomb as it was left for nine years to face its own crises. At the same time, there will be no truce in the West Bank, which is under occupation.”

It was remarkable that Meshaal did not say much about his talks in August with the former envoy of the Quartet, Tony Blair, to try to reach a truce between Hamas and Israel in the Gaza Strip. Meshaal may have deliberately kept his comments on the talks short by saying: “No conclusion has been reached,” which could indicate his desire not to completely block the road for any new regional or international mediation.

Meshaal reiterated Hamas’ fixed policy of non-interference in the internal affairs of Arab countries, and the movement’s respect of these countries’ privacy, denying any interference by Hamas in Arab internal affairs. At the same time, he emphasized the need for all Arab countries to make the Palestinian cause a priority, and thanked Qatar and Turkey for their contributions toward the reconstruction of Gaza.

Palestinians did not expect Meshaal to offer magical solutions to the uncontrollable Palestinian crisis, especially in regard to holding the PNC session and the conflict between the Palestinian leadership on the appointment of a successor to Abbas. Yet it seems Meshaal did not want to miss such a historic opportunity without giving a speech and stating Hamas’ position.