Some Hamas officials had hoped Khaled Meshaal would take a tougher stand on Fatah in his most recent speech, as Hamas members in the West Bank continue to be arrested despite the reconciliation deal. 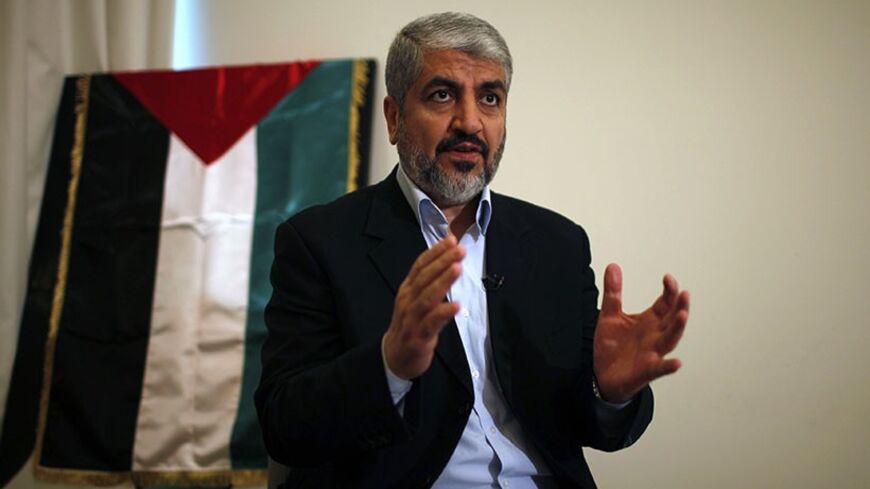 Palestinians had long awaited the speech by Hamas’ political bureau head Khaled Meshaal on May 20, which coincided with the anniversary of the Nakba. The wheel of reconciliation has started and a national consensus government will soon be announced.

Meshaal’s 40-minute speech was delivered from his headquarters in Qatar in the presence of dozens of Hamas figures as well as Arab and foreign journalists, writers and politicians. The speech was aired on Al-Aqsa, Al-Quds and Al Jazeera TV stations.

This was Meshaal's first speech in more than 10 months. A Hamas media official who spoke with Al-Monitor attributed the lapse to “a lack of political developments that require him to appear," adding, "But [Meshaal] is exercising his internal and external organizational duties around the clock. He can hardly find free time in his daily schedule because of his many duties and visitors.”

Although there was not much new in Meshaal’s speech regarding Hamas’ political vision, the reconciliation featured largely, as he declared his support for “ending the division with Fatah, supporting the consensus government and uniting to face the dangers against it.”

A Hamas political official who contributed to formulating Meshaal’s speech told Al-Monitor, “It is natural for the reconciliation [issue] to take up more than 20 minutes [of the speech], because the Palestinians need comforting words amid fears that the reconciliation may not succeed. Thus, the speech enumerated the positives of the reconciliation and the negatives of its absence. … The movement chose to not put up [a Hamas] banner in the conference, using only the flag of Palestine to prioritize the national aspect over the partisan aspect.”

In his speech, Meshaal repeated “concession” multiple times, saying, “Hamas has made concessions with Fatah. Making concessions to others is a necessity that we don’t regret. … [Concessions] are a fundamental pillar to turn the page of division forever, are an advanced step forward and greatly strengthen the home front.”

Palestinians expressed their satisfaction with Meshaal’s speech, with one student from Nablus saying, “It reassured them regarding the reconciliation. What he said about Hamas making concessions to Fatah are concessions from one brother to another and are the height of wisdom to make the reconciliation succeed.”

However, Al-Monitor spoke with second- and third-tier Hamas members, who resented what they saw as “the [large] size of the concessions made by Hamas to Fatah,” expressing fears that “Fatah may exploit the word 'concessions,' which Meshaal repeated in his speech, and Fatah’s feeling of [strength] to impose its partisan agenda on Hamas.”

In the same conciliatory tone that he used with Fatah, Meshaal invited the “West Bank security forces to take positions that promote reconciliation with Hamas.” Since the reconciliation process began, there has been an increase in the arrests of Hamas members in the West Bank.

A Hamas official in the West Bank who spoke to Al-Monitor on condition of anonymity praised Meshaal’s call but said, “We wanted to hear [Meshaal] make more forceful demands from the security services, which [didn’t care] about the reconciliation with Hamas. They continued to arrest our members, and we are now facing daily pressures from them. They are subjecting [our members] to arrest and summons, and [Hamas members] are asking us to take tough stances that put an end to their targeting.”

Political analyst Talal Awkal commented that Meshaal’s anodyne tone toward Fatah came as part of a speech of “historic character, [a speech] that drew Hamas’ policy for the future and inaugurated a new phase of national reunification. The [speech] was the culmination of revisions and transformations recently carried out by Hamas and a trend toward Palestinian nationalism more than ever before.”

Meshaal also talked about the armed resistance and used strong language such as, “Hamas is pursuing Israel in its strongest bastions. There will be no liberation except through resistance. We will liberate the West Bank as we liberated Gaza. The resistance has had [major accomplishments]. No one can encircle [Hamas]. There is no contradiction between reconciliation and resistance.”

Asked by Al-Monitor about the significance of the threats to Israel, the Hamas official who co-drafted Meshaal’s speech said, “When Hamas made concessions to Fatah to achieve the reconciliation, it should have raised the resistance talk to balance the discourse directed to the Palestinians and to the sons of Hamas.”

When asked whether Meshaal had hinted at further kidnappings of Israeli soldiers, the official said, “Let’s wait for the coming days. The [Palestinian] prisoners have been on hunger strike for 30 days, and Hamas will not throw [away] their sacrifices.”

Meshaal’s assertion that Hamas will continue its efforts to liberate the prisoners was widely circulated on social media and in text messages between Hamas members.

A Palestinian security official in the West Bank, however, downplayed Meshaal’s threats to Israel in a phone interview with Al-Monitor. “Hamas believes that its preoccupation with governance came at the expense of its military program. Meshaal wanted to remind the movement’s base about the importance of resistance. But we in the Palestinian Authority have a political program that doesn’t contain starting an armed confrontation with Israel, even if Hamas wants to. And I don’t think that we will permit this after the reconciliation,” he said.

Meshaal’s speech also addressed Hamas’ relations with regional states without naming them, except for Qatar. He praised Qatar’s “positions in support of the Palestinians,” and said that he was proud of this support. When Meshaal was in Syria, and prior to that in Jordan, he often thanked the countries that hosted the Hamas leadership.

Meshaal's thanking Qatar confirmed a previous Al-Monitor report about the strength of the relationship between the two sides despite talk of a chill in ties.

About Hamas’ position toward its former allies Iran, Syria and Egypt, Meshaal did not ad-lib but read from written text, saying, “Hamas has never constituted a threat to the security of Arab countries. [Hamas] even cooperated with them to preserve their security. [Hamas] has suffered a great injustice even though it has not and will not interfere in the affairs of any country. All the lies that the media pinned on Hamas lack evidence,” he said.

The Hamas official told Al-Monitor, “This statement was extensively discussed within the movement until the exact wording was reached. It summarized Hamas’ findings after internal deliberations to determine its position regarding the continuous movement in the Arab countries. It deliberately did not identify a particular country in light of the tensions with multiple countries such as Egypt, Syria, Iran and some Gulf states.”

Another detail that drew attention in Meshaal’s speech was his comment about “respecting the will of the Arab peoples,” a phrase that has been repeated by Hamas leaders. In an interview with Al-Monitor in Egypt, senior Hamas leader Mousa Abu Marzouk repeated a similar line in reference to Egypt’s presidential elections.

Meshaal’s speech was exceptionally important because two days later, on May 23, he met Iran’s Deputy Foreign Minister Hossein Amir Abdollahian in Doha, and on May 25, Gaza’s prime minister Ismail Haniyeh gave a speech in a press conference that was broadcast via satellite to Tehran. Those two speeches were an immediate translation of the rapprochement with Iran that Meshaal wished for in his speech. Meshaal had stressed “Hamas’ firm policy of noninterference in the internal affairs of surrounding countries,” and at the same time called on the latter — meaning Iran and the major Gulf states — to embrace the Palestinian cause.

The senior Hamas official told Al-Monitor, “Meshaal’s speech will determine the relations in the upcoming regional movement. Positive messages have been received from some capitals in response to the positive signals contained in [Meshaal’s] speech. Those [positive signals] turned the page on the past, which was marred by tension with the region, and clarified Hamas’ positions based on a vision that says, 'Hear from Hamas; don’t hear about Hamas.'”