Hamas has recently stepped up its visits to Palestinian camps abroad, raising questions about the purpose of these visits in light of preparations for Palestinian general elections. 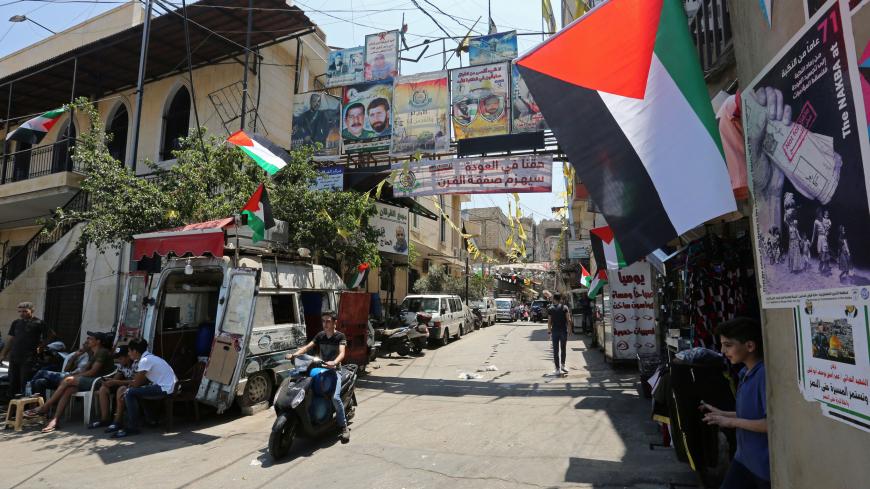 A boy rides on a motorbike as he drives past Palestinian flags at Burj al-Barajneh refugee camp in Beirut, Lebanon, June 24, 2019.

In a meeting with representatives of Palestinian factions as well as committees representing neighborhoods and civil organizations in the camp, Salah stressed the need to hold Palestinian elections wherever there are Palestinians, including in the diaspora.

On Dec. 8 a delegation from Hamas’ bloc in the Palestinian Legislative Council, led by head of the bloc Mahmoud al-Zahar, toured a number of Palestinian camps in Lebanon, including in Rashidieh camp in the city of Tyre, the Beddawi camp in Tripoli, Ain al-Hilweh and the Wavel Camp in the Bekaa.

On Nov. 29, Khalil al-Haya and Rawhi Mushtaha, both members of Hamas’ political bureau, visited several camps in Lebanon, namely Sabra and Shatila, Bourj el-Barajneh, Rashidieh and Ain al-Hilweh, where they met with representatives of factions and popular committees.

Haya had said in a statement published Aug. 6 by local media in Gaza that Hamas offered $100,000 to Palestinians in Lebanon’s camps. The movement had collected this money through donations in the Gaza Strip.

Hamas’ growing interest in Palestinian refugee camps abroad raises questions about the objective behind such visits, especially as they coincide with preparations for the general Palestinian elections. These elections are expected to include the legislative and presidential polls, as well as elections for the Palestinian National Council (PNC), which is the supreme authority of the Palestinian Liberation Organization (PLO) and drafts the PLO’s policies.

Hamas political bureau member Suhail al-Hindi told Al-Monitor, “Hamas has decided to participate in the PNC elections. It is hoping Palestinians abroad in general, and refugees in particular, will influence these elections.” He said there are about twice as many Palestinians living outside the territories than in them.

Palestinians in the diaspora, including refugees in camps, are not allowed to take part in the legislative and presidential elections. However, Palestinians at home and abroad both have the right to vote in the PNC elections through direct suffrage, in accordance with the PLO’s Basic Law.

According to Hindi, Hamas had asked during talks in Gaza with the head of the Central Elections Commission, Hanna Nasser, that PNC elections be held first, considering that the council is the only institution that unifies Palestinians from all parts of the world.

Hindi added, “However, [President] Mahmoud Abbas refused [Hamas’] request and demanded that legislative elections be held first. So we ended up accepting this.”

Hamas handed over its written response on the elections to Nasser on Nov. 27, where it agreed to participate in general elections (legislative and presidential ones, followed by PNC elections), stressing the need to convene the preparatory committee affiliated with the PNC, and which includes members of the council and representatives of all Palestinian factions, including Hamas and the Islamic Jihad. Hamas wants the preparatory committee to hold a dialogue on mechanisms to reform the PNC, which has been dominated by Fatah since its inception, in order to guarantee the representation of all Palestinians at home and abroad.

Sami Khater, another member of Hamas’ politburo, told the Palestinian Information Center on Dec. 22 that the national role of Palestinians abroad (in refugee camps and in other countries) is “reflected through their participation in the PNC elections, and we hope the PLO leadership is serious about holding these elections.”

Since the PNC was established in 1964, no elections have been held as it was difficult for Palestinians abroad to directly vote for their representatives in this council. Consequently, the members of the council — which number 433 — were appointed by the Palestinian parties under the PLO’s framework, and popular syndicates and unions at home and abroad that also fall under the PLO’s framework. Since then, the PNC has held irregular sessions to appoint new members to replace those who died. Overall, 23 sessions have been held since its inception, with the latest one taking place in May 2018 in Ramallah.

Fatah has 81 members in the PNC. This number includes 36 who were appointed during the council’s 13th session held in Cairo in 1977; and 45 members who form part of the PLC and consequently are considered PNC members. Fatah thus holds the largest number of seats in the PNC.

Hindi believes the PNC faces a major problem, which is “the dominance of Fatah and its leader Mahmoud Abbas, who heads the PLO’s Executive Committee in charge of implementing the PNC’s decisions. This has obstructed the implementation of all the decisions that most members of the PNC voted in favor of to counter Israel during its last session held in May 2018. One of the most important of these decisions is ending the security coordination [between the Palestinian Authority (PA) and Israel] and suspending the Palestinian recognition of Israel.”

He added, “This is why the PNC should be reformed through new elections that include the participation of all Palestinians at home and abroad.”

Fayez Abu Shamala, a member of the PNC and writer at the Felesteen paper, told Al-Monitor that Hamas is betting on Palestinians abroad to play a role in reforming the PNC. The movement, he added, will seek to guarantee those Palestinians their right for a direct vote to choose their own representatives at the PNC once elections are held.

Abu Shamala further said Hamas’ interest in the PNC elections “stems from its [Hamas’] belief that they are more important than the legislative and presidential elections. This is because the PNC elections result in the formation of supreme leadership authorities for the Palestinian people capable of reforming the PLO and deciding the fate of the PA.”

Talal Okal, a writer at the Al-Ayyam paper, told Al-Monitor, “Hamas is seeking to compete against Fatah in the PNC and to take part in the Palestinian decision-making process.”

He added that Hamas wants to rebuild the PLO and make it more opposed to Israel, "and seeks to be part of the PLO, which is considered the sole legitimate representative of the Palestinian people at home and abroad.”

Okal said the influence Palestinians abroad can have on any PNC elections in the future should not be underestimated. But he ruled out holding such elections as Palestinians are very much scattered around the world.

Meanwhile, Hindi said, “If PNC elections through direct vote are not held, we will call for a national meeting to discuss another mechanism to hold new PNC elections that guarantees the participation of all Palestinians wherever they are in the world.”