President Mahmoud Abbas’ call for an emergency meeting of the Palestinian National Council to shuffle the PLO’s Executive Committee has met with opposition. 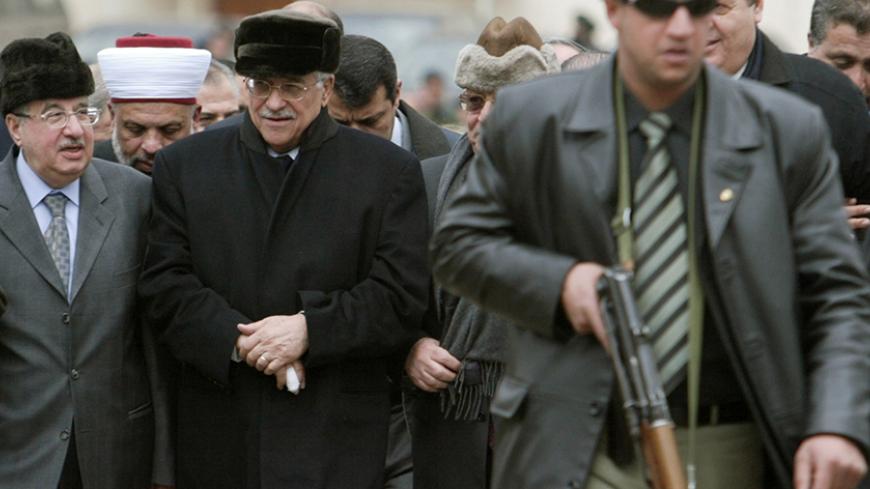 AMMAN — The man sitting outside the plush villa in west Amman looks like an old fighter. Security does not appear to be of much concern in Deir Ghbar, a stable Amman suburb and location of several embassies and diplomatic residences. The chain-smoking guard waves visitors through, into the house of Salim Zanoun, speaker of the Palestinian National Council (PNC), the highest parliamentary body of the Palestine Liberation Organization (PLO), and then directs them to Zanoun's office on the second floor. There's no metal detector, no body search.

The office is full of black-and-white photographs of Zanoun with founders of the Fatah movement, among them Khalil Wazir (Abu Jihad), Salah Khalaf (Abu Iyad) and especially the late Yasser Arafat. A Palestinian flag is perched behind the large office desk, and a huge photo of Jerusalem’s golden Dome of the Rock covers the wall behind it.

Zanoun, a lawyer by training, had on Aug. 26 expressed his unhappiness with the tactics of his fellow founder of Fatah and Palestinian President Mahmoud Abbas, who is trying to push through an emergency meeting of the PLO's highest body, the Executive Committee, to reshuffle it to his advantage. Zanoun made his position known to the newly selected secretary-general of the PLO's Executive Committee, Saeb Erekat, and later to Abbas. Zanoun and Abbas met alone in Amman Aug. 26.

In an Aug. 25 interview with Radio al-Balad in Amman, Palestinian commentator Lamis Andoni said that Abbas' maneuvering primarily involves his recent personal rivalry with Yasser Abed Rabbo, the secretary-general of the PLO Executive Committee, replaced by Abbas in late June. Andoni said that although Abbas removed Rabbo as secretary-general, he has been unable to legally push him off the committee. Andoni believes that the mass tactical resignation of 10 Executive Committee members Aug. 22 was aimed at forcing a vote in an attempt to oust Abed Rabbo from the committee.

According to the deputy speaker of the PNC, Tayseer Quba’a, Zanoun's opposition has to do with the type of PNC meeting being proposed. Quba’a told Al-Monitor that the PNC speaker has no problem calling a regular meeting to discuss policy issues as well as a vote for a new Executive Committee. “If the PNC session doesn’t manage the necessary two-thirds quorum, then it can hold a legal session the next day, attended by whoever attends.”

Article 8 of the Executive Committee bylaws gives the PNC speaker the right to call regular meetings. Nayef Hawatmeh, head of the Democratic Front for the Liberation of Palestine (DFLP), has insisted on the need to respect the bylaws of the PNC and not to use it simply for personal gain. The London-based Al-Quds al-Arabi reported that Hawatmeh had sent a letter to Zanoun following the Aug. 22 resignations, insisting on holding a regular PNC session and not an emergency meeting.

Attempts to quickly force an emergency meeting were apparently rebuffed, even after Abbas sent Erekat to meet with Zanoun. According to Tayseer Khaled, another Executive Committee member, the following exchange took place between Zanoun and Erekat during their meeting Aug. 23. Although the press reported this exchange by quoting Khaled, it is not clear how he was privy to it:

Erekat: "If the PNC [meeting] is held, it can decide anything it wants including to change the entire Executive Committee."

Zanoun: "That is true if it were a regular meeting. However, if it is an emergency meeting, the laws prevail, and the bylaws are clear that an emergency meeting can only result in one thing, which is to elect replacements for the members who resigned."

Quba’a explained that there are 766 PNC delegates who have been members since the last regular meeting in 1996. At present, according to Quba’a, the PNC staff in Amman, numbering 70, will work hard to organize a regular meeting in Ramallah, as Abbas wishes, even though it will be difficult. To hold a regular PNC meeting, 474 members must attend according to PLO Executive Committee member Ahmad Majdalani.

According to Al-Arabi al-Jadid, 353 PNC members are based in the West Bank and 160 in Gaza, which is under Hamas control. If the Islamist movement is not planning to attend, it is unlikely that it will accommodate the exit of the Gaza-based PNC members. A further 60 PNC members are based in Jordan, and the Palestinian government will most likely accommodate their travel across Israeli-controlled King Hussein Bridge. Others from other parts of the world might not be able to attend on short notice.

Abbas and Zanoun are discussing Sept. 12, 14 or 17 as possible dates for a regular PNC session, which would allow Abbas to attend the UN General Assembly meeting, which opens Sept. 15 and continues until early October.

The comings and goings at Zanoun’s Amman villa have given new impetus to a decaying movement and PNC. The popular Palestinian Ma'an News Agency reported Aug. 23 that the latest move by Abbas has provided the PNC “action and suspense,” but it is unlikely that Palestinians will witness any major changes to the national strategy of the Palestinian movement resulting from a regular meeting of its parliament in exile.

The absence of major segments of the Palestinian movement — namely, Hamas and Islamic Jihad — will mean that the upcoming meeting will be more a meeting of PLO loyalists close to Abbas rather than a genuine meeting of all Palestinian leaders and activists.