Is Abbas’ resignation from PLO bid to consolidate power?

Critics claim that Palestinian President Mahmoud Abbas has resigned as chairman of the PLO's Executive Committee to force a re-election and then stack the new committee with his supporters. 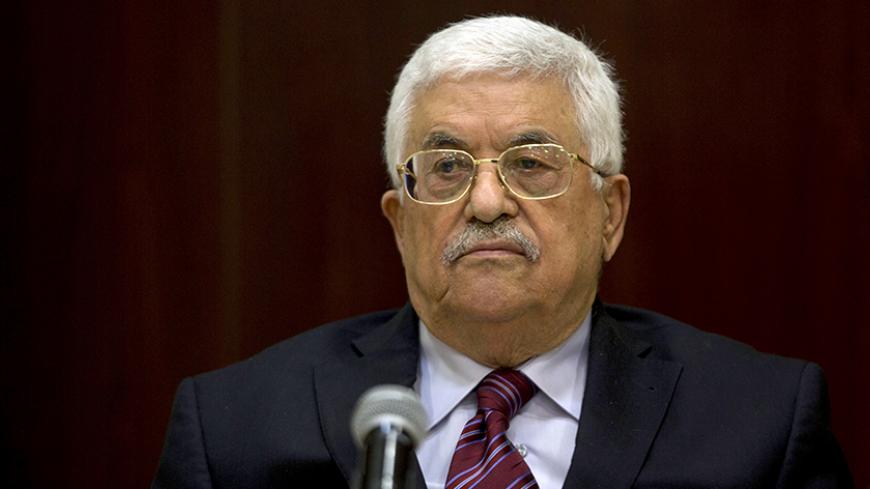 RAMALLAH, West Bank — Palestinian President Mahmoud Abbas and nine other members resigned Aug. 22 from the Executive Committee of the Palestine Liberation Organization (PLO) in a bid to force the Palestinian National Council to hold an extraordinary session within one month and elect a new executive committee, knowing that the council has not convened since 1996.

Although Abbas said the resignations are merely aimed at “activating the Executive Committee,” politicians interviewed by Al-Monitor said the intent is to stack the committee with Abbas supporters.

Sharp criticism of the resignations and their possible consequences is expected to increase when a new committee is formed and could negatively affect intra-Palestinian relations, and the entire political system, opponents say.

The 18-member Executive Committee is the highest authority in the Palestinian political system. It is elected by the National Council and is authorized to make decisions about the general political situation. Prior to the resignations, Executive Committee Secretary-General Yasser Abed Rabbo was laid off June 30 and Saeb Erekat was elected to replace him Aug. 22.

Ghassan Shaka, an Executive Committee member who resigned, told Al-Monitor the resignations are “a message to the president of the National Council to hold an extraordinary session and elect a new executive committee.”

Shaka said, "The threatened legal quorum of the Executive Committee, the activation of the PLO’s role and the ongoing division are all factors that led us to resign in order to select a new committee capable of carrying out its tasks."

Under PLO law, if more than one-third of the Executive Committee's seats are vacant, they must be filled within 30 days during a special session.

An extraordinary session is necessary, according to Shaka, because it would be difficult to assemble all 700 members within a month, as many members live abroad. The extraordinary session will only be attended by members of the current Executive Committee, the National Council office members, members of the Legislative Council and members who are able to arrange attendance in a month's time.

Rabbo, however, said in an interview with Al-Monitor that what happened was a “complete violation of the rules and regulations of the PLO.” Rabbo, who did not attend the last session Aug. 22, added that “the holding of an extraordinary session is not justified."

"An extraordinary session is only held when an ordinary national council can by no means be held. But nothing impedes the holding of a normal session now, which proves that the goal is to form a leadership based on certain whims and personal desires,” he added. “National issues are entirely off the table, and they have been replaced with the distribution of seats and the exclusion of some members under the false pretext of renewing the organization, despite the fact that those who were promised to get positions are over 70 years old."

For his part, Rabah Muhanna, a member of the Popular Front for the Liberation of Palestine political bureau, told Al-Monitor that what happened in the Executive Committee meeting “can be described as futile, as it will lead to sabotage [of] the PLO, and is intended to reshape the Executive Committee to the whims of President Abbas, who wants to bring in people who can obey him.”

Muhanna said, “What happened was a wrong and harmful step aimed at convening a national council without quorum, and this does not go in line with the spirit of the PLO, which is an umbrella for all the Palestinians.”

This step did not go unnoticed by Hamas. Hamas leader Hassan Yousef told Al-Monitor that Abbas is attempting to “monopolize Palestinian decision-making” and said this proved that “the PLO has weakened and is now being used for political and personal purposes.”

The Democratic Front for the Liberation of Palestine expressed the same conviction in a press release, calling an extraordinary session “an unjust step aimed at controlling the organization.”

Vice President of the Legislative Council Hassan Khreisheh said in an interview with Al-Monitor that the resignations are “futile and aimed at solving the internal conflict between members of the authorities and the PLO in preparation for the next stage.”

Khreisheh said, “When someone submits their resignation, they should not be re-elected. But what happened was a prelude to the exclusion of some people and their replacement with others in order to get things back to the way they were.”

He questioned the validity of reports about the activation of the organization and said, “Those seeking change should bring about real change, but the people in question are not changing tools. The Palestinian people should have been invited to choose their leadership instead of having some people choose themselves for over 60 years. This must stop.”

Formation of a new PLO executive committee could be considered a fatal blow to the already-tenuous reconciliation and the Beach Camp Accord, which was signed April 23, 2014. The accord formed the provisional leadership structure of the PLO in order to activate the organization and have Islamic Jihad and Hamas join.

Hamas' Yousef denied that any invitation had been extended to his movement to attend any of the PLO meetings. He said, “The organization’s agreed-upon leadership framework under the Beach Camp Accord is the real key to reforming the organization. What happened within the Executive Committee will deepen the chasm of internal division and greatly delay reconciliation.”

Muhanna said the resignations are designed to monopolize Palestinian decision-making and "deal a blow to the teetering reconciliation.”

In turn, Rabbo said, “This move will have serious complications and will deepen the divide and weaken the legitimacy of the organization among the people and fundamental forces such as Hamas and Islamic Jihad, with which a dialogue should be started so that they could join the organization.”

He added, “I do not think that President Abbas resigning or stepping down is on the table, neither for him nor any other party. But the risk remains for the unity between the West Bank and Gaza, and for the PLO as a framework that includes everyone and does not undergo reshuffling merely to exclude those who oppose its leaders and bodies becoming [political] tools.”

For his part, Khreisheh said that what happened “circumvents the law and will impact the people's unity and reconciliation and entrench the totalitarian regime, which the Palestinian political system is heading to, rather than the power-sharing rule.”