Why hasn't Abbas called for a meeting of the Palestinian Legislative Council?

Some Palestinians wonder why President Abbas refuses to convene the Palestinian Legislative Council; others wonder why he would bother, since he has assumed executive, legislative and judicial power in the West Bank. 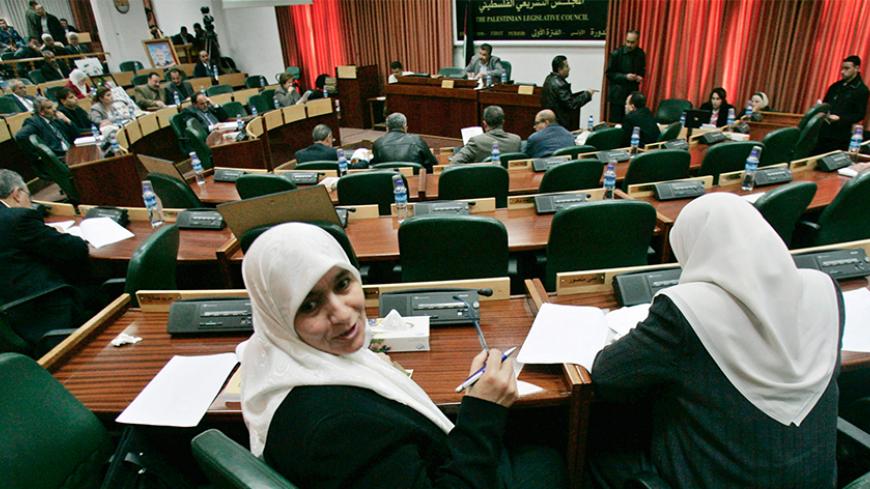 RAMALLAH, West Bank — Despite repeated calls for President Mahmoud Abbas to convene a meeting of the Palestinian Legislative Council (PLC), the Palestinian people are still waiting.

In the most recent bids to get Abbas' attention, 18 MPs in the council — the majority of which are from Fatah — addressed a Nov. 4 letter to Abbas asking him to hold a PLC session. Also, the Hamas parliamentary bloc in the Gaza Strip organized a sit-in outside PLC headquarters in Gaza.

Najat Abu Bakr, a Fatah MP and one of the letter's signatories, told Al-Monitor, “The letter was delivered to President Abbas and the head of Fatah's parliamentary bloc in the PLC, Azzam al-Ahmad, but they ignored it and did not reply.”

Yet in a recent interview with Al-Monitor, PLC Vice President Hassan Khreisheh called the letter "an important development."

"Hamas has repeatedly called for the holding of a PLC session, and today, 17 Fatah MPs, in addition to one independent MP, are calling for the same thing. This means we have a quorum to hold a consensus session,” Khreisheh said.

The council, which is responsible for monitoring the government's performance and enacting laws, has been inactive for years. It was first formed in 1996 and lasted 10 years, rather than expiring on schedule in 2000, because of the outbreak of the second intifada. In 2006, Hamas won a large PLC majority. However, about a year later, the PLC’s work was disrupted following armed clashes between Fatah and Hamas in June 2007, which resulted in Hamas taking over the Gaza Strip and Abbas declaring a state of emergency.

Abu Bakr said the Palestinian people, who have been engaged in a new intifada since Oct. 1, want the PLC to set a date for early presidential and legislative elections within three months. However, the president's failure to respond indicates he has turned a blind eye to the PLC’s persistent paralysis.

Although the Palestinian consensus government was sworn in June 2, 2014, it failed to prepare for presidential and legislative elections. In addition, Fatah and Hamas failed to implement the Beach Refugee Camp agreement signed by the two movements on April 23, 2014. That agreement stipulated that Abbas would call on the PLC to hold a session within a month.

Since the PLC was disrupted, Abbas exclusively handles the legislative, judicial and executive authorities in the West Bank, while Hamas controls the Gaza Strip. This paralyzed the PLC in the West Bank, while Hamas MPs in Gaza held sessions separately, without the participation of MPs from other blocs. In this context, the question remains: Who is preventing a full PLC session?

“Some influential members in the Palestinian political system are blocking any elections or elected body," Abu Bakr said. "They do not want an active PLC, as they are comfortable with the way they are managing things. The Council of Ministers has become the Legislative Council, as it refers certain laws to President Abbas in order for him to ratify them through decree laws.”

He added, “There is no true reconciliation because those holding negotiations for reconciliation do not want to achieve it. There are two teams from Hamas and Fatah that are benefitting from the division and want it to continue.”

Jamil al-Majdalawi, an MP for the Popular Front for the Liberation of Palestine, told Al-Monitor, “The key to the solution is in the hands of President Abbas, who has the prerogative to convene all of the Palestinian bodies, such as the PLC, the temporary leadership framework of the Palestinian Liberation Organization [PLO] and the Executive Committee. In addition, Hamas must stop treating the Gaza Strip as a hostage in negotiations with Fatah.” In other words, the PLC cannot convene unless Abbas convenes all parliamentary blocs.

Both Fatah and Hamas, Majdalawi said, have to stop blackmailing each other and abide by the Beach Refugee Camp agreement. "Also, Hamas should allow the consensus government to freely practice its work in the Gaza Strip,” he added.

As a condition to implementing the rest of the terms stipulated by the Beach Refugee Camp agreement, the Palestinian Authority (PA) is stipulating that the government must operate in the Gaza Strip and handle the crossings.

Khreisheh noted, “No decision has been made yet, and President Abbas does not seem willing to activate the Palestinian institutions. The reactions we are getting to our repeated calls to hold a PLC session are not encouraging, and there is a lack of seriousness among those in charge of the reconciliation agreement [Fatah representative Ahmad and Hamas representative Mousa Abu Marzouk], who make promises and hold successive meetings without reaching actual results.”

He added, “There is a need to hold a PLC session in order to support the Palestinian intifada politically, financially and through the media by enacting laws and policies that help promote the citizens’ resilience, as well as to confront the Israeli Knesset’s ratification of settlement construction and decisions against stone-throwers. There is also a need to develop mechanisms of cooperation and communication with parliaments around the world through the PLC commissions, and reveal the occupation’s violations."

Khreisheh agreed with Abu Bakr's assessment about what is stalling a PLC meeting.

“Many influential politicians and decision-makers in the PA do not want the PLC to return, and they want to carry on with their violations without the PLC holding them accountable,” Khreisheh said. “President Abbas assumes all positions in the PA and the PLO, so why [would he] allow anyone to share power? The one who exclusively handles the power of governance would not want anyone to share it with.”

George Giacaman, head of Muwatin, The Palestinian Institute for the Study of Democracy, told Al-Monitor, “It is currently not possible to hold a PLC session, as it falls within the terms of the reconciliation agreement, which includes the activation of the PLO, Hamas and the Islamic Jihad joining it, and holding presidential and legislative elections. But neither [Fatah nor Hamas] is prepared to bear the consequences” of hesitating to implement the agreement.

Since the PLC has not filled its monitoring and accountability roles, two different legislative environments have been created over time in the West Bank and the Gaza Strip. In addition, the PLC's absence no doubt was a major contributor to many cases of governmental corruption in general, as documented in the “Integrity and Anti-Corruption Report" published April 27 by Transparency Palestine (Aman).