The Palestinian Legislative Council held an emergency meeting in December, apparently the first to include Fatah members since 2007, but analysts are not optimistic that it will affect the political stalemate. 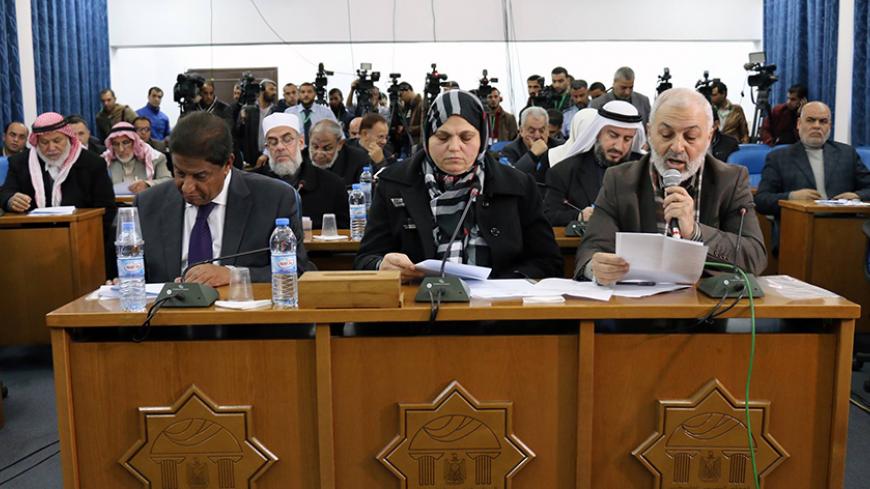 GAZA CITY, Gaza Strip — What does it take to bring together legislators who have refused to meet officially for almost 10 years? Take away their immunity from prosecution.

Fatah and Hamas, the two main Palestinian political parties, have been unable to reach an agreement over a division of power since mid-2007. The Islamist Hamas movement controls the Gaza Strip, while Fatah rules the West Bank. Fatah parliament members have refused since the split to take part in any session held by the Hamas-controlled Palestinian Legislative Council (PLC).

The session was held at the PLC headquarters in Gaza City, with the participation of 80 parliament members out of a total of 132, most of whom are affiliated with Hamas. West Bank parliament members participated by phone. The rest of the parliament members are either jailed in Israeli prisons or belong to the Fatah camp that opposes Dahlan. Dahlan was ousted as Fatah's leader in 2011, but remains a parliament member even though he now lives in the United Arab Emirates.

Mohammed al-Ghoul, the head of the PLC legal committee, said in a speech during the session that Abbas’ decision to rescind diplomatic immunity is illegal and unconstitutional, stressing that the PLC reserves this right over its members.

Hassan Khreisheh, the PLC second deputy speaker, told Al-Monitor he also rejects Abbas’ decision to lift immunity and said Abbas should strive to prevent PLC political disagreements. He acknowledged, however, that the outcome of the PLC emergency session is not binding for the president.

Khreisheh called upon parliamentarians to continue to hold sessions with the participation of Fatah members. During the meeting, the PLC agreed to form a committee to facilitate further sessions.

Ashraf Jomaa, a Fatah deputy who participated in the meeting in Gaza City, expects Fatah deputies to attend the next parliamentary session, which he said is likely to be held in mid-January. He didn't specify an agenda.

However, Azzam al-Ahmad, the head of Fatah’s parliamentary bloc, downplayed the PLC meeting in a Dec. 22 press statement. “The PLC holds sessions and meetings as per the Basic Law and its internal protocol does not have any legal weight,” said Ahmad, who did not attend the meeting.

Akram Atallah, a political analyst and writer for the Palestinian Al-Ayyam newspaper, said the session will not change the Palestinian political status quo. He noted that many of the PLC's decisions in Gaza, such as the Social Solidarity Act, were not implemented by the Palestinian Authority (PA) in the West Bank, and, similarly, Abbas’ decisions are not carried out by the Hamas-controlled PLC in the Gaza Strip.

Atallah told Al-Monitor that the goal of the meeting was essentially a pre-emptive move by Fatah’s deputies who fear their association with Dahlan will lead to them also being accused of crimes.

Atallah also stated that the Palestinian system of government is threatened with collapse as a result of the PA and Abbas’ decrees on one hand, and steps taken by the PLC in Gaza on the other. He stressed that the ultimate solution for the ongoing dispute is to achieve internal unity between Fatah and Hamas.

Mustafa al-Sawwaf, a political analyst and former editor of the local Falastin newspaper, shares Atallah's opinion that the PLC meeting will not push Abbas to reverse his latest decrees. The PLC, he said, should have acted immediately in 2007 when Abbas disrupted parliamentary sessions and asserted "dominance over the legislative and judicial powers," Sawwaf told Al-Monitor.

Observers of the political scene in the Palestinian territories mostly seem to believe that the PLC meeting will not end the political stalemate or push Abbas to reconsider his decisions to sack deputies, as he refused to attend the PLC’s session and has yet to make a statement about it.