Hamas-Fatah feud heats up as talk of Abbas successor intensifies 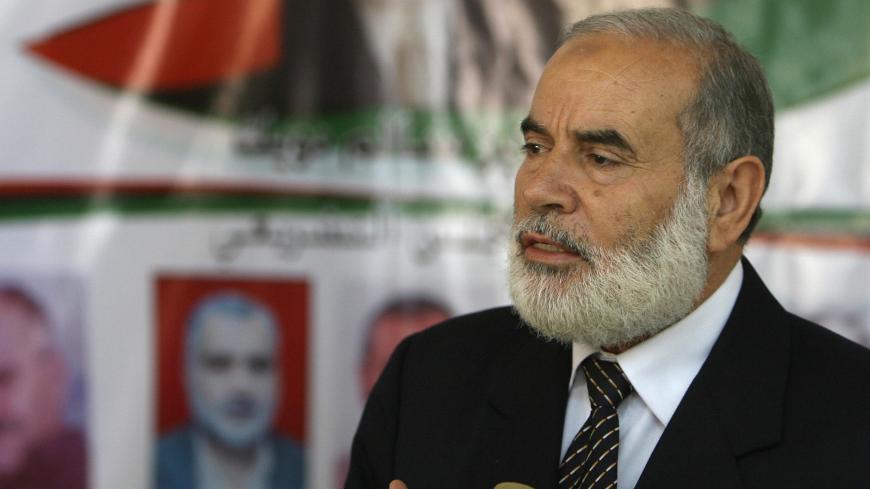 GAZA CITY, Gaza Strip — A new legal controversy and political feud has erupted between the Palestinian Hamas and Fatah movements. On June 25, Ahmad Bahar, the first deputy speaker of the Hamas-controlled Palestinian Legislative Council (PLC), accused the PLO of setting up a scheme to strip the PLC of its powers and confer them to the PLO’s Palestinian Central Council (PCC).

Bahar said in a statement distributed by the PLC media office, “Turning the PCC into a substitute for the PLC is tantamount to passing the 'deal of the century,'" in reference to the forthcoming Mideast peace plan from US President Donald Trump. He pointed out that the PLC will hold a meeting next week to discuss this “dangerous plan” and to set the controls and mechanisms to stop it.

Bahar’s accusation was triggered by statements reported in London-based Al-Hayat newspaper. Quoting an anonymous prominent Palestinian official on June 21, the article said, “The PCC will meet on July 25 to declare itself the highest power in the Palestinian Authority [PA], enjoying the competences of the PLC to fill the potential vacuum in executive institutions, such as the presidency and premiership.”

This comes after increased talk about President Mahmoud Abbas’ successor. Recently, Abbas, who is known to be a heavy smoker, had endured a series of health scares. On May 20, he was diagnosed with pneumonia and admitted to the hospital for several days.

The PCC is the highest authority in the PLO. It is empowered to carry out the decisions taken by the Palestinian National Council (PNC) on important issues for the Palestinian people. It represents most Palestinian entities, except for Hamas and the Palestinian Islamic Jihad. Meanwhile, the PLC’s functions are limited to legislation and oversight of the executive branch affiliated with the PA.

Khrisheh said, “The process of selection of members of the PCC and the PNC is plagued by nepotism and cronyism, unlike the selection process in the PLC, where members are chosen directly by the people.”

He pointed out that the idea of replacing the PLC aims to prevent PLC Speaker Aziz Dweik, a Hamas leader in the West Bank, from filling the position of president of the PA in case of its vacancy.

On June 25, in an interview with Palestinian news website Sama, Dweik expressed his interest in filling the presidential office.

Hamas won the majority of seats in the PLC in the last legislative elections held in the Palestinian territories in 2006. In the wake of the internal division in June 2007, the PLC was suspended in the West Bank but continued to hold meetings in Gaza. These meetings are attended by members of Hamas only, and in exceptional cases by members of parliament affiliated with the Fatah - Democratic Reform Bloc headed by dismissed Fatah leader Mohammed Dahlan.

Abbas’ health scares have created a buzz in the Palestinian streets about his successor. Fatah and the PLO have yet to choose a successor. Hamas, for its part, is sticking to the Palestinian Basic Law as amended in 2003. According to Article 37, if the office of the president of the National Authority becomes vacant due to death or resignation submitted to the PLC, “the Speaker of the PLC shall temporarily assume the powers and duties of the Presidency of the National Authority for a period not to exceed sixty (60) days, during which free and direct elections to elect a new President shall take place in accordance with the Palestinian Election Law.”

Fatah parliamentarian Walid Assaf told Al-Monitor, “The PCC was the one with the mandate to establish the PA and the institutions stemming from it following the signing of the Oslo Accord in 1993, providing for the establishment of a Palestinian legislative authority. It is therefore the highest authority for Palestinians.”

Commenting on the decisions of the PCC at its next meeting, whose date is not yet determined, Assaf confirmed that they will fall within the scope of the powers granted to the PCC by the PNC. He asserted that these decisions will be legitimate, recalling that the PLC has been suspended since 2007.

In a June 26 press release, the Fatah parliamentary bloc in the PLC said, “The term of the PLC presidency has expired since July 11, 2007, when Hamas parliamentarians refused to abide by the law and meet President Mahmoud Abbas’ call for a new PLC session.”

In turn, Yahya Moussa, the deputy head of Hamas’ parliamentary bloc, told Al-Monitor that the PCC and the PA have different and separate governing laws and therefore are separate entities.

He explained that the talk about transferring powers or replacing the PCC with another council is legally unfounded. “This idea is a recipe for deepening internal division and conflicts. I hope the PCC would disregard it.”

Moussa asserted that the PLC will remain unchanged until new elections bring in new parliamentarians. He also urged Abbas to hold comprehensive presidential and legislative elections and elect a new PNC. “This would renew legitimacy in the PA and the PLO and allow the people to choose their representatives.”

Article 47 of the 2005 Amendment to the Basic Law states, “The term of the current Legislative Council shall terminate when the members of the new elected Council take the constitutional oath.”

In this vain, professor of law at Birzeit University Ahmad Nasra argued that the constitutional situation in the Palestinian territories is complicated and needs to be addressed. “Each Palestinian party interprets the Basic Law according to its own interests,” he told Al-Monitor. “The 2003 amended Basic Law stipulates that the PLC shall keep exercising its powers until the election of new members.”

He noted that Fatah is currently invoking Article 47 of the Basic Law, which stipulates, “The term of the PLC shall be four years from the date of its being elected and the elections shall be conducted once each four years in a regular manner.”

“Hamas, for its part, invokes Article 47 terminating the PLC when the new elected members are sworn in,” he said.

Nasra believes the best solution for the Palestinian people and their political parties to get out of the legal and political impasse is comprehensive presidential, legislative and PNC elections in the Palestinian territories and abroad.

According to Abdul Sattar Qasim, a professor of political science at An-Najah National University, “The withdrawal of powers of the PLC, its dissolution or even the suspension of its work since 2007 is a blatant violation of the Palestinian Basic Law by President Abbas.”