Laws and decisions issued separately in the West Bank and Gaza Strip during the split will be raised in the upcoming days by the reconciliation committee. 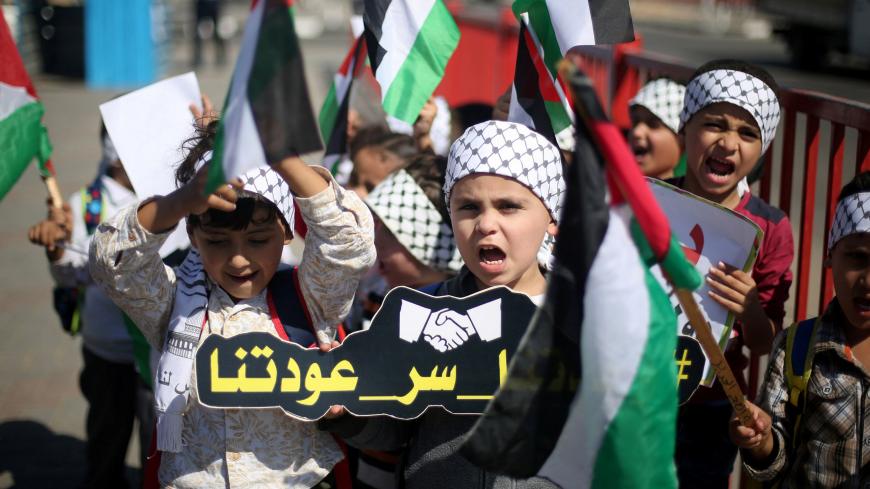 On top of the political and geographic division that Palestinians experienced over the past 10 years — since Hamas took control of the Gaza Strip in June 2007, until Fatah and Hamas signed the reconciliation agreement in October — many contradictory presidential decrees, laws and government decisions were issued in the Palestinian territories.

In the coming weeks, the reconciliation committee will be preoccupied with determining the fate of these laws, to reach a unified legal system that will put an end to the legislative duplication between the West Bank and Gaza Strip.

Legislative duplication between the West Bank and Gaza is evident in their tax laws. Palestinians are subject to double taxation by virtue of legislation issued by the Palestinian Legislative Council (PLC) in the Gaza Strip and the West Bank government. The two governments have separate budgets.

Mazen Noureddine, the dean of the faculty of law at Ummah University in Gaza, told Al-Monitor, “Talks about unifying Palestinian laws issued during the divide must be based on two principles: the rule of law and the preservation of the Palestinian public interest. However, questioning whether or not legislation issued during the divide is constitutional would undermine any hope of establishing the unity of the Palestinian society and regulating its legal system — as a safety valve for the State of Palestine.”

Noureddine added, “This is why it is necessary to elect a legislative council, have an elected president and an appointed government, in accordance with the constitution. Only then we can review legislation and make sure it meets the requirements of the public interest and preserve the rights acquired under the Palestinian Basic Law.”

Hassan al-Awari, a legal adviser to President Mahmoud Abbas, said Nov. 10 that the presidential decrees issued during the split were in accordance with the constitution, but that they need to be ratified by the PLC in the first session that will be held after the reconciliation. Meanwhile, he noted that the laws enacted in Gaza are unconstitutional, which requires rectifying this legal status for the success of reconciliation.

Ammar Dweik, the head of the Independent Commission for Human Rights, told Al-Monitor, “Dozens of laws were issued in both the Gaza Strip and the West Bank during the split in order to facilitate the lives of Palestinians, and we cannot change these arrangements all at once. Meanwhile, some Palestinians are calling for holding a PLC session as soon as reconciliation is completed, to either carry out specific legal tasks or prepare for legislative elections immediately.”

The legislation and decisions issued under the divide may have served the authority that approved them, not the Palestinian national interest. These decisions led the executive authority to impose control over the functions of the legislative authority. This violated the basic principle of governance, based on the principle of separation of powers, and it negatively affected public freedoms in the West Bank and Gaza.

Attorney Samir al-Manahemeh, a legal researcher at Al-Mezan Center for Human Rights, told Al-Monitor about “the duplication that emerged after 2007, which was reflected in the issuance of 194 laws by President Abbas and 59 laws by the Hamas-affiliated Change and Reform bloc of the PLC.”

He said, “The most important repercussions included establishing two separate legal systems and differing rights and duties among citizens of the Palestinian state, creating a legal situation that undermines the possibility of developing the justice sector, and obstructing the State of Palestine’s obligations as part of human rights conventions.”

Manahemeh added, “To overcome this, we should no longer issue new legislation. Instead, we need to complete the reconciliation agreement, hold legislative elections, and present all decisions and laws before the elected PLC to approve, reject or amend them.”

Al-Monitor examined Al-Waqae — the official Palestinian gazette where laws, regulations, orders and presidential decrees are published — and noticed that the number of decisions Abbas has issued since 2007 is close to 200, much larger than the number of PLC laws issued between 1996 and 2007, which amounted to only 90 laws before Hamas won the legislative elections in January 2006.

Hamas' Change and Reform bloc said Nov. 12 that the PLC will remain a safety valve for reconciliation, and that the constitutional legitimacy of any future government can be achieved when it receives the PLC’s vote of confidence.

After passing bills, the PLC would send them to Abbas via fax or email for ratification within 30 days. If Abbas fails to act on a bill that was passed within this deadline, it would automatically become law. However, since January 2009 when Abbas’ term legally ended, the PLC stopped sending bills to the presidency for ratification as the Change and Reform bloc affiliated with Hamas was the only party convening in the PLC in Gaza. The other parliamentary blocs representing Fatah, the Popular Front for the Liberation of Palestine and the Democratic Front for the Liberation of Palestine boycotted the PLC sessions in Gaza.

Faraj al-Ghoul, a former Palestinian justice minister in the Hamas government in Gaza, told Al-Monitor, “During the split, Abbas issued decisions and laws without submitting them to the PLC, and they would be put up for review during the PLC’s first session following reconciliation, so deputies can amend or cancel them. Although the PLC remained effective in Gaza, it was shut down by the Palestinian Authority [PA] in the West Bank, and [the PA] security services prevented members of parliament from entering the PLC building in Ramallah or the holding of sessions.”

Ghoul added, “Nevertheless, the PLC is the only Palestinian institution that still enjoys legitimacy and no party can disrupt it. This is why a heated debate is expected to start in the coming days about the future of the PLC; some blocs want to activate it, while the Fatah bloc refuses and insists on keeping all functions and powers in the hands of the executive authority, headed by Abbas.”

The PA’s security services in the West Bank shut down the PLC's headquarters and told deputies not to enter the building and hold sessions, thus disrupting the PLC for over 10 years, since 2007, when the Palestinian division began.

The fact that the PLC was not convening or was forced to remain inactive in the West Bank during the years of division made it easier for Abbas to issue laws without long periods of deliberation as they required only a public discussion and three readings. Abbas was able to use these laws to extend his control over the West Bank and establish power there. Meanwhile, Hamas sought to manage Gaza’s affairs by issuing laws that fell in line with its own political, economic and social inclinations.

All this opens the door for extensive discussions between Fatah and Hamas during the upcoming reconciliation talks in Cairo on Nov. 21, as each party will seek to consolidate its own laws and decisions in the future.