Is Abbas tightening his grip on power with new constitutional court?

The establishment of the Palestinian High Constitutional Court by presidential decree has led to widespread criticism concerning its legality, especially since the move came at a time of intense division between the West Bank and Gaza Strip. 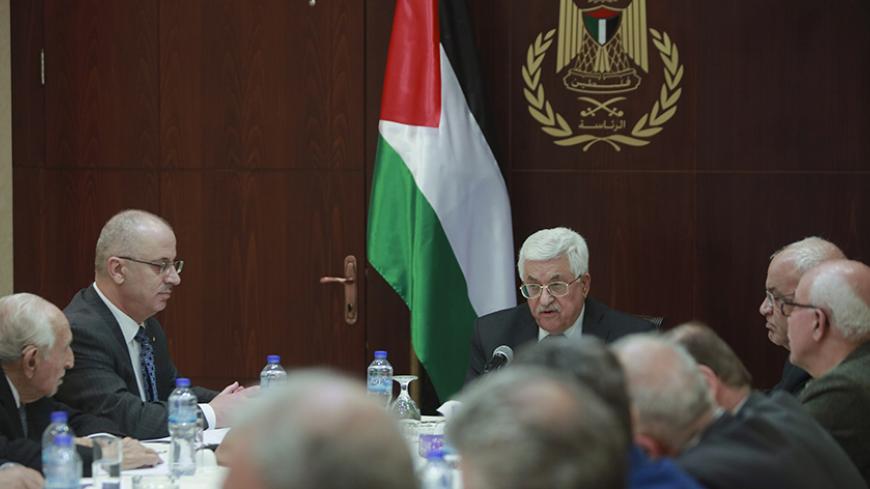 GAZA CITY, Gaza Strip — On April 3, Palestinian President Mahmoud Abbas issued a presidential decree establishing the first Palestinian High Constitutional Court, to follow up on the rules and regulations as well as the constitutionality of laws and define the powers of the three authorities.

Abbas’ legal adviser Hasan al-Ouri told Al-Monitor from Ramallah, “The consultations preceding the establishment of this court started in 2006, but the Palestinian division in 2007 between the West Bank and the Gaza Strip after Hamas took over Gaza delayed the process. Today, President Abbas had to rise to the challenge for two main reasons: first, the difficulty of examining the appeals and constitutional issues that require decisions and legislations — brought before the High Court — which acted as a temporary constitutional court according to Article 104 of the Palestinian Basic Law, which stipulates that the temporary High Court shall handle all cases brought before the administrative courts and the Supreme Constitutional Court until they are formed; and second, the implementation of Article 103 of the Palestinian Basic Law.”

Ouri explained that Article 103 specifies that a High Constitutional Court shall be established to examine the constitutionality of laws, regulations and other enacted rules, and to settle jurisdictional disputes that might arise between judicial entities and administrative entities having judicial jurisdiction.

“The High Constitutional Court was established based on accurate consultation,” Ouri said.

All of the judges of the new Constitutional Court were sworn in April 10 by Abbas at the presidential headquarters in Ramallah, while Abu Nasr and Wahidi took the legal oath via videoconference from Gaza after Hamas banned them from traveling to Ramallah.

In an interview with Al-Monitor, Zuhair al-Masri, a political analyst and history professor at Azhar University in Gaza, said, “The establishment of the Constitutional Court now is in the Palestinians’ best interest, as it will strengthen the rule of law and fill the gap created by the Palestinian Legislative Council’s [PLC] suspension of powers.”

At the same time, he stressed “the need for consensus and consultation with all parliamentary blocs before issuing such decree, to spare Palestinians further discord and conflict that may result from monopolizing the national decision.”

Hamas member of parliament Mohammad Faraj al-Ghoul told Al-Monitor from Gaza, “The president issued a decree establishing the Constitutional Court without consulting anybody and without referring to the parliamentary blocs in the legislature again or completing the consultations that had started in 2006. He also issued another decree that re-establishes a new electoral committee and appointed a new deputy general, thus violating the Palestinian Basic Law.”

He said, “By doing so, Abu Mazen [Abbas] left no room for reconciliation. Moreover, the meager chances at a breakthrough in reaching a settlement led the president to plan for a new phase where he continues to hold on to his post and suspend the PLC."

Abdul-Sattar Ibrahim, a professor of political philosophy, spoke to Al-Monitor from Ramallah, saying, “The establishment of the Constitutional Court at this specific time reveals Abbas’ political motives, as he is aiming to stay in power and monopolize all political decisions. Abbas vested wide powers in the new court to help him strengthen his post and influence. The Constitutional Court will have jurisdiction to rule on the appeals against the eligibility of the Palestinian Authority’s president, oversee the constitutionality of laws and regulations, and have the power to abolish or amend them.”

The decision to establish the Constitutional Court was met with widespread criticism by Palestinians, with several social and political bodies expressing their concern that the president is stepping up his efforts to establish a political rule that only serves the interests of a small group with exclusive powers in decision-making.

Following the promulgation of the presidential decree, the Independent Commission for Human Rights (ICHR), along with several other rights organizations, addressed a memo to Abbas explaining that legal and political reforms should take priority over the establishment of the court. The reforms, according to the memo, include activating the PLC as a prelude to further political reforms and holding general elections that would restore legitimacy to all Palestinian institutions. The memo also addressed the amendments Abbas introduced to the Constitutional Court’s law, considering that they aim to expand the president’s authority and powers in appointing the members of the court, as well as interfering with and overruling the court’s decisions.

Speaking to Al-Monitor from Gaza, Vice President of the ICHR Hamdi Shaqoura said, “Restoring the Palestinian judiciary’s credibility and dignity cannot be achieved by issuing more decrees and decisions that may lead to further deterioration of the political situation and that of the judiciary. This is rather achieved by consolidating the legal system, restituting the PLC’s powers, ensuring the judiciary’s independence by not subjecting it to political agendas and re-establishing a sole supreme judicial council in the West Bank and Gaza tasked with overseeing the judiciary in a way that guarantees its integrity.”

In a statement issued April 4, Fatah member of parliament Majed Abu Shamala argued that the decree establishing the Constitutional Court is fraught with multiple legal inconsistencies as it was issued amid ongoing political division among Palestinians. The appointed judges were not assigned by the judicial council nor by any other general assembly. Furthermore, the appointments were not the product of consultations with the president of the judicial council, experts, human rights organizations, bar association or the justice minister.

Abbas may have finally found what he is looking for in the Palestinian legislation to face the accusations against him after forming the new court at such a time, as a pro-active step to establish and expand his control over the PA’s institutions and intervene in the court’s work and references, by referring to Article 103 of the Basic Law that stipulates that the establishment of the Constitutional Court shall be by virtue of a law or decree. This is what Abbas did when he issued a decree to establish the court. He also based his decision on Article 104 that stipulates that the High Court shall temporarily assume all duties assigned to administrative courts until they are established; all these duties shall fall within the jurisdiction of the Constitutional Court directly after it is established, and the High Court shall no longer be able to follow up on them.