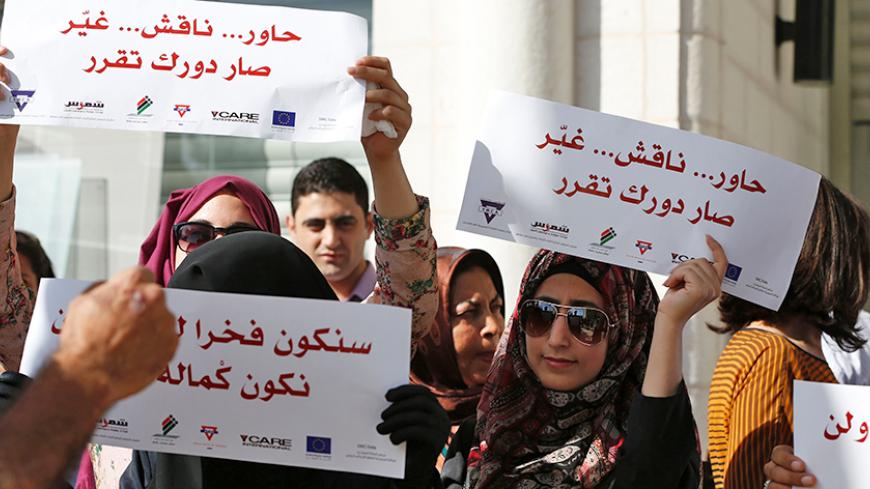 RAMALLAH, West Bank — In a special meeting held Oct. 13 to examine the legal repercussions of the decision issued by the Supreme Court of Justice ordering the cancellation of the local council election in the Gaza Strip, the Palestinian parliamentary Legal Committee in Gaza recommended considering the possibility of reinstating Ismail Haniyeh's government, after what it described as the “abandonment” by the government of national consensus of its responsibilities.

The local council elections that had been slated for Oct. 8 were suspended by a decision issued by the Supreme Court of Justice on Oct. 3 to allow elections in the West Bank and cancel them in the Gaza Strip. The decision prompted the Council of Ministers, which wanted to organize elections in both the West Bank and Gaza, to hold a meeting Oct. 4 and announce the postponement of the elections for four months.

During the meeting, Prime Minister Rami Hamdallah said the postponement of the elections had been decided in coordination with Palestinian President Mahmoud Abbas, which indicates that the president wants to hold elections in the West Bank and Gaza at the same time, contrary to the decision of the Supreme Court in limiting elections to the West Bank. This also means that all of the efforts exerted during the next four months to overcome the obstacles that have prevented the holding of the elections, as well as the decisions that may be taken by the government, will surely be subject to the president’s approval.

It should be recalled that the Palestinian Authority (PA) did not recognize the jurisdiction of the Court of First Instance in the Hamas-controlled Gaza Strip competent under local election law No. 10 of 2005 to examine challenges against electoral lists. This pushed Hamdallah to talk Oct. 4 about the possibility of establishing courts specialized in electoral cases by virtue of a presidential decree, whose decisions would be binding for all.

The local council elections law No. 10 of 2005, amended as a result of law No. 12 of 2005 and again in 2012, specified that the Court of First Instance in each region is competent to examine challenges against the electoral lists, while general election law No. 1 of 2007 (governing presidential and legislative elections) provides for the formation of courts to examine electoral cases and challenges, provided these courts are formed before holding general elections and dissolved after their completion.

Government sources told Al-Monitor on condition of anonymity that “initial contacts were made by the ministers of the government in Gaza and national figures with the various factions in Gaza, including Hamas, to discuss new mechanisms of holding local council elections in the Gaza Strip and the West Bank, and the possibility of amending the local council election law so as to provide for the formation of an electoral court subject to consensus just like the general election law. But these contacts are still in their early stages.”

Establishing electoral courts may be a solution for the electoral crisis, allowing the conduct of local council elections in the West Bank and Gaza, but this needs an amendment of the law by Abbas. Ahmed Khalidi, a constitutional law professor and head of the Palestinian Constitution Drafting Committee, told Al-Monitor, “The electoral court specified in the general election law cannot be competent to examine cases related to the local elections unless the law is amended.”

Khalidi said, “A law may be amended by the legislative council or by virtue of a presidential decree, in which case the law would entrust a single court to examine judicial disputes relating to legislative, presidential and local council elections.

Abbas’ legal adviser Hassan al-Ouri told Al-Monitor that an amendment of the law is unlikely. “There is no need for the establishment of a special court for elections, since the Supreme Court of Justice is competent to examine electoral cases and its members enjoy legal competencies,” he said.

Ouri explained, “The Supreme Court decision to cancel elections in Gaza falls indeed within the scope of its competence and was issued based on its conviction that the elections in Gaza will not be fair, because holding elections in Gaza would mean that the PA would have to admit the legitimacy of the Hamas-led government and its institutions and illegal police and security services that are tasked with protecting the ballot boxes, which is contrary to PA policy. This is why the Supreme Court decided to cancel the elections in the Gaza Strip and hold them only in the West Bank, based on law No. 10 of 2005, which authorizes holding local elections in a specific part of the country and excluding other parts.”

He added, “The postponement was in line with the law and we will not have a new law, since there is nothing wrong with the law in force. The amendment of the electoral law is not an option at the moment, since this requires efforts and time.”

Farid Jallad, the former president of the Supreme Judicial Council, told Al-Monitor, “The Supreme Court is a court specialized in administrative challenges and when it ordered the elections to be held in the West Bank and not in Gaza, it exceeded the limits of its powers, since the government is the authority competent to determine the place and time of the elections.”

The [PA] government did not rule out the possibility of establishing a special electoral court as a solution for the electoral crisis. Minister of Labor Mamoun Abu Shahla told Al-Monitor, “All the proposals are on the table for the time being in order to agree on how to conduct the elections. The government will not be intransigent and will not take any step not agreed upon with the factions. It is discussing proposed ideas, but so far no agreement has been reached.”

Immediately after the postponement of the elections, the government in Ramallah started making contacts with the factions through its ministers. Abu Shahla said, “Since the government's postponement decision, contacts have been underway with all [Palestinian] parties to ensure that the elections will be subject of a consensus without the possibility for any errors that may lead to their cancellation or postponement one more time.”

In light of news about Hamdallah’s intention to visit the Gaza Strip and meet with the Palestinian factions in Gaza in general and Hamas in particular to discuss how to conduct the elections, Abu Shahla said, “Contacts with the factions are ongoing but have yet to lead to tangible results. The prime minister's visit to Gaza is still being discussed and a decision has not been reached yet on this issue. When the ongoing contacts with the factions lead to a tangible result, Hamdallah will visit Gaza as the head of a national unity government.”

About the possible scenarios put forward for the elections after four months, Hisham Kahil, the executive director of the Palestinian Central Elections Commission, told Al-Monitor, “The government will put forward the scenarios for the upcoming elections; it must issue a new decree announcing these elections so that we can start our work. The Election Commission is an executive authority that does not interfere in the amendment of laws. We only apply the laws that are agreed upon.”

The establishment of a competent court to examine local election issues similar to the court provided for by virtue of the general elections law is one of the ideas that the government may implement to overcome the elections crisis.

This would only require the submittal of an application to Abbas to amend the law. It should be noted that implementing this scenario would not affect the options that the government may choose to hold the elections — such as holding the elections in the West Bank but not in the Gaza Strip — if negotiations with Hamas fail, despite the continuing European pressure and repeated demands by Nickolay Mladenov, the United Nations special coordinator for the Middle East peace process, to hold elections in Gaza as well as the West Bank.