How Palestine's parliament is squandering millions of dollars

There are no prospects that a new speaker could be elected or the PLC itself could be activated, as millions of dollars are disbursed to cover the spending of members of parliament. 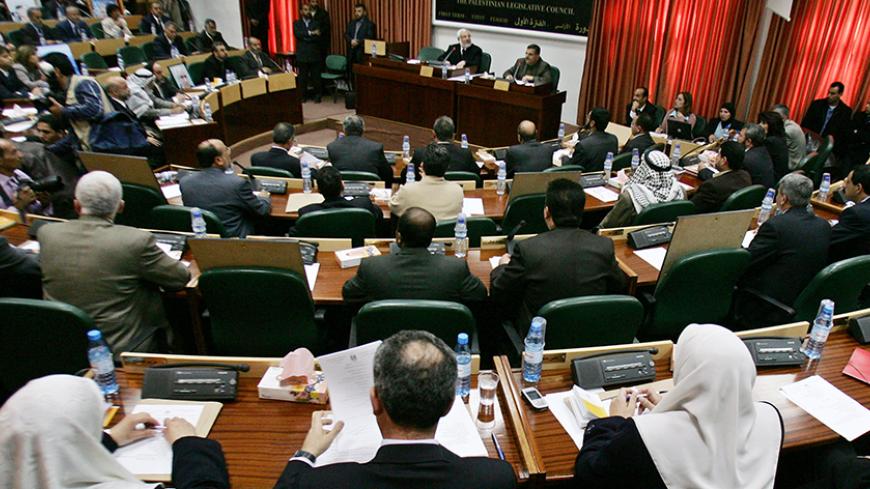 RAMALLAH, West Bank — Jan. 25 marked the 10th anniversary of the Palestinian Legislative Council's last election. The PLC consists of 132 elected members of parliament (84 parliamentarians in the West Bank and 48 in Gaza) who were convened in 27 legal sessions from the date they were elected in 2006 until June 14, 2007, when parliament sessions were disrupted following clashes between Fatah and Hamas, and the latter’s control over the Gaza Strip. Between 2006 and the present, they have failed to pass any legislation, except for laws pertaining to the PLC's costs and expenses.

This has prompted citizens to raise questions on parliamentary expenditures such as the salaries of parliamentarians and parliament's staff members and the ongoing privileges despite the parliament's inactivity.

Under Law No. 10 (2004) and Law No. 11 (2004), each member of parliament is paid a monthly salary of $3,000 and is eligible for customs' exemption for one vehicle, which is provided, licensed and maintained by the PLC. Members of parliament and their spouses are given permanent diplomatic passports and a sum of $15,000 that is paid upon their election to improve living conditions. The parliamentarians are also paid 8,000 shekels ($2,100) on a monthly basis to cover office expenses such as rent, water and electricity bills as well as employees’ salaries; they are also provided a pension that equals 12.5% of their salary for each year of PLC membership.

In addition, the parliamentary budget includes travel expenses, which are not defined by clear financial standards, and the salaries of the PLC administrative staff, which currently number 170 in the West Bank.

There are no official financial statements on the PLC’s expenditures, and the PLC General Secretariat refused to talk to Al-Monitor on the issue. According to Law No. 10, nearly $31.5 million has been paid in salaries to 84 parliamentarians in the West Bank since the PLC was elected. Hamas has continued to pay since the split with the West Bank the salaries of the 48 parliamentarians who reside in the Gaza Strip. The office expenses of West Bank members of parliament reached 85 million shekels ($21.4 million).

Administrative sources at the PLC who spoke on condition of anonymity told Al-Monitor that there is no clear and transparent system explaining why some funds were disbursed to members of parliament, especially when it comes to office expenses, as these particular expenses should be disbursed and vetted through a transparent system by the government or the PLC chairmanship in case it was convened or in the event of it holding ordinary sessions.

Hamas member of parliament Ahmed Attoun told Al-Monitor, “Each parliamentarian receives a salary of $3,000, which he is entitled to. This is because all members of parliament quit their [previous] jobs before they ran in the elections, in accordance with the Elections Law No. 9 [2005]; they have no other source of income except for their [parliamentary] salary.”

In regard to the other funds disbursed to members of parliament, Attoun said, “During their detention by Israel on May 24, 2007, following the capture of Israeli soldier Gilad Shalit in Gaza, the Finance Ministry stopped the allowances of the Change and Reform bloc [Hamas] members, which cover the costs of running their own offices [$2,100 per parliamentarian per month]. This has led to the accumulation of public debts on the offices, in particular since the offices are rented and there is a staff in charge of dealing with the public every day.”

Attoun noted that there are also allowances to cover the parliamentarians’ travel expenses and meetings, which the Hamas members of parliament rejected, considering them illegal as they are disbursed without the PLC being convened and without its approval.

He added, “All the details of the allowances of the members of parliament, the Palestinian Authority and Palestinian Liberation Organization factions and institutions should be revealed.”

Najat Abu Bakr, a Fatah member of parliament, told Al-Monitor, “The PLC’s budget needs to be accessible to everyone so that the disbursement mechanism can be verified, particularly petty cash and travel expenses whose disbursement is not made public.”

On the role of parliamentarians revealing these details, Abu Bakr said, “We requested that the heads of parliamentary blocs, the PLC secretary-general and President Mahmoud Abbas provide us with the expense details. Yet some influential parties in the PLC are controlling the expenses and refuse to disclose the details, which indicates the extent of the administrative chaos.”

She added, “As parliamentarians, we are affected by the disbursement procedures and mechanisms, and the public should not regard us as the culprits. At the same time, we cannot tell them how the PLC budget is being spent as we do not have the budget's documents and information. This indicates that there is a specific group that is taking advantage of the systematic disruption within the PLC.”

Azmi al-Shuaibi, the general coordinator of the Coalition for Accountability and Integrity, accused in December 2014 the PLC of receiving remunerations and petty cash from the Finance Ministry in exchange for passing the 2014 parliamentary budget.

Second Deputy Speaker of the PLC Hassan Khreisheh told Al-Monitor, “The expenses covering the cost of running the parliamentarians’ offices and their travel expenses should be immediately stopped. Because of the legislative disruption and considering that they are not carrying out their duties as members of parliament, they are not eligible for these allowances.”

On the role of the PLC speaker in monitoring these expenses, Khreisheh said, “The Fatah parliamentary bloc is holding meetings in the West Bank and the Hamas bloc is holding meetings in Gaza. But I — as [PLC] deputy speaker — am not attending any of these meetings, because my role is to preserve [the PLC's] unity and not to contribute to its division in light of its disrupted legislative role. The PLC chairmanship is not responsible for supervision or accountability.”

The general secretary of the Palestinian People's Party, member of parliament Bassam al-Salhi, told Al-Monitor, “The PLC is operating with minimal expenses, because it is inactive.”

Salhi said, “We cannot remove any item from the PLC’s budget. In regard to the expenses of the parliamentarians' offices, [their disbursement] is needed and justified by the fact that they deal with the citizens' issues, and receive and follow up on their complaints with the official authorities. If removed from the budget, members of parliament will turn into retired parliamentarians who are not able to serve the people or handle their complaints and help them.”

He added, “The major defect haunting the citizens more than the spending of public funds is the political system that is entirely paralyzed, including the PLC.”

The PLC, which was supposed to reflect the citizens’ voice and accountability, has turned into a passive council on which millions of dollars are being spent without it carrying out its duty. The council's inactivity has not only led to undermining the democratic process in Palestine, giving free rein to the executive power, but also to draining the public money by millions of dollars.