In a report by the Palestinian Legislative Council’s Oversight and Human Rights Committee, the Palestinian Authority is accused of neglecting Gaza’s financial needs, while it is witnessing the deterioration of its people’s living conditions. 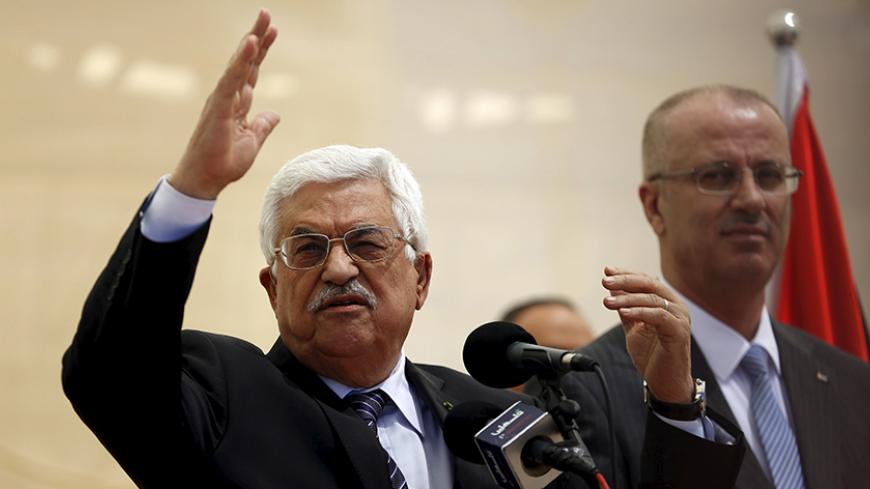 Palestinian President Mahmoud Abbas gestures as he speaks during the opening ceremony of a park in Ramallah, April 5, 2015. - REUTERS/Mohamad Torokman

The Palestinian Legislative Council’s (PLC) Oversight and Human Rights Committee issued a report June 3 revealing what it deemed as the Palestinian Authority's (PA) financial neglect of the Gaza Strip, which is denied its financial allocations of the government's budget.

Al-Monitor attended the June 3 parliamentary session in Gaza and met with the chairman of the PLC’s Oversight Committee, member of parliament Yahya Moussa, who wrote the report. “The PA is working on a systematic policy aimed at deliberately destroying and weakening Gaza, in a bid to cause the collapse of public services and wreak havoc on the Gaza Strip,” he said. “President Mahmoud Abbas’ financial management when it comes to the Gaza Strip consists of implementing an exclusionary, discriminatory and marginalizing policy against the population. The 2014 financial data reveal the clear spending discrimination against Gaza and show how unfair it was to the Gaza staff. This worsened the economic and living conditions as well as the lives of the people."

On June 3, PLC deputy speaker Ahmed Bahar accused Abbas of creating economic and financial crises in the Gaza Strip that increased the severity of the siege and raised unemployment and poverty to the world's highest levels.

According to the report obtained by Al-Monitor, Gaza's contributions to the PA’s coffers during 2014 through taxes and fees amounted to $1.552 billion and constituted a very important source of revenue for the treasury.

Since the announcement of the legislative elections’ results in January 2006 and Hamas’ victory, Gaza has been witnessing a gradual blockade — most notably the financial pressure — knowing that the Gaza siege emanated from several parties: the PA, Egypt, Israel and the international community. This only leads to exacerbating the suffering of the Gazan population at all levels.

For his part, on Jan. 4, Hamas' political bureau Deputy Chairman Ismail Haniyeh accused the PA of taking more than $70 million from Gaza per month, without contributing to solving any electricity and reconstruction problems.

On July 30, 2014, Minister of Social Affairs in the West Bank Shawqi Issa said that the PA spends 461 million shekels ($121 million) on Gaza per month and that more than 55% of its budget is allocated to Gaza. He added that this is normal because Gaza is besieged and destroyed.

The timing of the issuance of the PLC’s report has significant importance as it coincides with the first anniversary of the formation of the national consensus government, which Hamas accuses of neglecting and marginalizing Gaza. Hamas has been suffering from a financial crisis since Iran stopped its support and the tunnels with Egypt were closed in 2014, which caused a further deterioration in the living conditions for Gazans.

All of this may have led the PA to impose more restrictions on Gaza, which prompted Hamas to accuse the PA of deliberately neglecting Gaza and not deeming it as a part of the Palestinian homeland.

In an interview with Al-Monitor, Faraj al-Ghoul, former justice minister and head of Hamas' Change and Reform bloc in the PLC, criticized what he called "the silence of formal financial institutions and their failure to monitor the PA's financial performance." He said, "The difficult situation in Gaza requires an urgent investigation into the PA's financial corruption and holding to account those responsible for the waste of public money and Gaza's blockade."

Economic expert Rami Abdo confirmed June 12 that the PA employees were unfairly treated in Gaza and some of these had their contracts terminated and were not paid their salaries. According to Abdo, the salaries of government employees in Gaza are 15-20% less than that of the employees in the West Bank. This is unfair to the staff in the Gaza Strip, as there is a huge gap between the ministerial expenditure on the West Bank and Gaza, causing Gazans to pay a huge price as a result of the government’s neglect. Gazans are denied basic services and are constantly witnessing electricity cuts, in addition to travel restrictions.

Meanwhile, the Gaza government employees are not being promoted or paid their salaries, unlike their counterparts in the West Bank.

“Between 2008 and 2014, the PA deprived Gaza of $3 billion, and its financial practices reveal flagrant discrimination when it comes to appointments in the absence of equal opportunities between Gaza and the West Bank,” Moussa said. “In those years, 18,000 government employees were appointed in the West Bank, while the PA refused to pay the salaries of 25,000 public workers in Gaza."

The report said that up to 70% of the annual profit of the Bank of Palestine comes from Gaza and is worth $40 million. But the bank has no financial commitment toward Gaza, while 70% of the annual profits of the Palestine Telecommunication Co. (PalTel) come from the Gaza Strip and are worth $120 million, given the absence of any competitor in the local market. The Gaza Strip does not benefit from any of this.

A high-ranking official in the Ministry of Finance in the West Bank told Al-Monitor on condition of anonymity that he opposed the Oversight Committee’s report and said, “The [PA] government spends 47% of its budget on Gaza. This includes salaries of more than 63,000 employees, in addition to the salaries of prisoners, liberated prisoners, families of martyrs and the wounded, as well as the Ministry of Social Affairs’ subsidies for the poor.”

He added, “Concerning the government’s development projects that are focused on infrastructure such as water and sanitation, expenses on Gaza exceed 50%. In terms of electricity, the PA covers the entire cost of 55 million shekels [$14 million] per month, in addition to the expenses of treatment outside of hospitals affiliated with the Gaza Ministry of Health, which are covered by the government coffers."

Member of the PLC’s Oversight Committee Huda Naim, who participated in the preparation of the report, told Al-Monitor what she considered as the “financial policies adopted by the PA to besiege and pressure Gaza. These policies are reflected in abolishing the customs code, constantly inciting regional circles against [Gaza], transferring the major companies’ financial centers from Gaza to Ramallah and practicing constrictive action on major companies to convert their tax revenues to the PA in the West Bank, and not in Gaza.”

The PA’s neglect toward Gaza is not only limited to the financial level — despite its seriousness — as political neglect is very clear. The PA is well aware that Hamas — which has been controlling the Gaza Strip since 2007 — is suffering from declining living conditions, and wants Palestinians to lash out at Hamas, although it knows full well that Hamas is not responsible for the deterioration of Gazans' living conditions.