Who's going to pay for Palestinian budget gap?

The new Palestinian state budget is being criticized both for its approval process and its expenditures, which some critics say favor administrative items at the expense of other sectors. 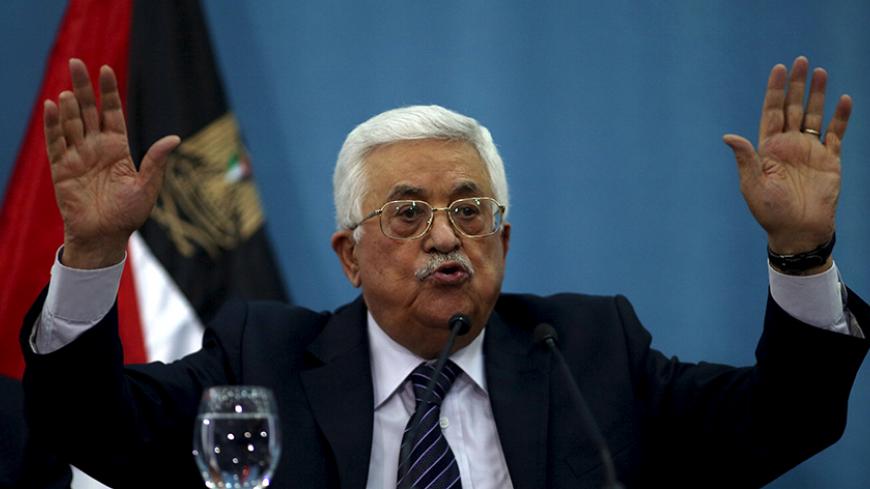 Palestinian President Mahmoud Abbas gestures as he speaks to the media in the West Bank city of Ramallah, Jan. 23, 2016. - REUTERS/Mohamad Torokman

RAMALLAH, West Bank — The recently approved 2016 Palestinian general budget is garnering a lot of criticism from legislators who consider it lopsided at best, and possibly illegal.

The $4.25 billion budget is marked by high administrative spending but no allocations for development expenses, leading some Palestinian citizens to fear the government will impose more taxes to reduce the budget gap financing.

President Mahmoud Abbas and his Cabinet approved the budget in early January, but the legislation was never submitted to the full Palestinian Legislative Council (PLC).

“The approval of the general budget without presenting it to the PLC is an illegal measure,” Ahmed Attoun, Hamas member of parliament in the West Bank, told Al-Monitor.

The Modification of General Budget Control and Financial Affairs Law No. 7 of 1998 stipulates the following process: The Cabinet proposes the general budget draft law to the PLC at least two months before the start of the year. The PLC then refers the draft law to the financial affairs and budget committee for study and detailed annotation. The committee gives its recommendations to the PLC, which holds a special session to discuss the draft law in light of the committee’s report and recommendations.

Palestinian Minister of Finance Shukri Bishara had discussed the general budget with the PLC’s special economic and financial committee — which has 15 members of parliament — throughout four sessions. The last session during which the parliamentarians made remarks on the budget was Jan. 6 at the PLC headquarters in Ramallah with only some of its members present, as the PLC has been inactive for years and is not holding general sessions with full quorum.

“We were not invited to participate in the budget discussion, and the discussions that took place were not sufficient because the law requires discussing the details and provisions of the budget under the parliament’s [PLC] wing, with the participation and approval of all members of parliament, as per the Palestinian [budget] law,” Attoun said.

The way the budget was approved “gives the impression that the legislative and supervisory authority is dispensable — hence, nobody will hold the ministers accountable."

Justifying his attendance of the budget discussion session with Bishara, member of parliament Ahmad Abu Holi, who heads the PLC’s special economic and financial committee, told Al-Monitor, “As parliamentarians, we have two options: either to respond to the minister of finance’s invitation to discuss the budget and give our financial and legal comments, or to stay home under the pretext that the PLC is dysfunctional.”

He added, “We wrote 15 pages of comments on the budget and submitted them to the minister of finance and the heads of the parliamentary blocs [for them] to present to President Abbas and Prime Minister Rami Hamdallah. This is the least we could do, as part of our job. We mainly stated that the government’s austerity plan to reduce its expenditures should not affect the employees’ rights and should not harm citizens, the education and health sectors and social affairs.”

When asked why the budget was not presented to the full PLC, Abu Holi answered, “As the PLC has been dysfunctional for eight years, many draft laws and budgets are approved in the West Bank and Gaza without legislative approval, like the 2016 budget — which is neither the first nor the last to pass this way. We can either practice the minimum level of legislation and supervision, or stay home.”

Since the Palestinian division in 2007, the government in Ramallah approves the general budget and Abbas ratifies it without presenting it to the PLC. Hamas rejects these procedures and considers them illegal. But this time, the problem was that the budget was presented to the PLC committee, despite the presence of a national consensus government that was formed as per the Beach Refugee Camp agreement between Hamas, Fatah and other factions.

He said, “The parliamentarians’ opinions and suggestions are not given any importance in the budget discussion and approval. The legislative meetings are not taken seriously and participation is limited.”

The budget itself has had its share of criticism by experts and institutions, most notably in the position paper issued Jan. 20 by the Civil Society Team for Enhancing Public Budget Transparency. This team was formed in 2010 by the Coalition for Accountability and Integrity, and includes 64 academic institutions and civil society organizations and experts in the West Bank and Gaza Strip. The team meets every year to independently discuss the general budget.

Hama Zeidan, coordinator of the Civil Society Team, told Al-Monitor, “The current budget did not include the economic and social objectives that the PA intends to achieve, whether in full or in part. The budget did not clarify the considerations that determined the priorities and size of the government spending. It also lacked tables explaining the financial and monetary situation of the public treasury account, the PA debts and receivables; the proposed plan to settle or collect them; the PA equity interests; and investments in local and non-local bodies and companies. The budget also did not include detailed statements about the allocations to various sectors and institutions.”

Zeidan added, “The budget included an excess of spending in some sectors at the expense of other sectors. The allocations made for administrative expenses [security institutions get 28% of the budget] — accounting for 51.35% of the total budget — are 27.5 times higher than the economic sector.”

It should be noted that salaries and wages of government employees still grab the lion's share of the public budget, while allocations made for development expenses were very limited, in particular in the social sector, which includes the ministries of education, health and social affairs.

According to the 2016 public budget, the total deficit ratio before foreign financing amounts to 32.5% ($1.38 billion) of the total budget value, while foreign financing projections reached $995 million, which means that the financing gap (nonfinanced expenditure) of the budget will amount to $387 million. This prompted the government to announce its intention to implement austerity and cost-cutting measures in 2016.

“There is nothing new in the 2016 budget. The budget marginalizes spending in terms of development, while increasing spending on other sectors such as government and security salaries, which does not set adequate foundations for development," Nasr Abdul Karim, an economic expert and professor at Birzeit University, told Al-Monitor.

“The financing gap would reach approximately $390 million this year. This means that the government will delay the disbursement of the amounts due to the private sector that provides supplies for the government, or will resort to bank loans, thus accumulating public debt,” he said.

Abdul Karim ruled out the government's ability to reduce its expenditures, saying, “In late January, President Abbas signed dozens of promotions and appointments, which will require millions of dollars. Each year the government spending exceeds what is expected, and this budget will face the same challenges.”