Palestinian budget excludes Gaza, unless it toes the line 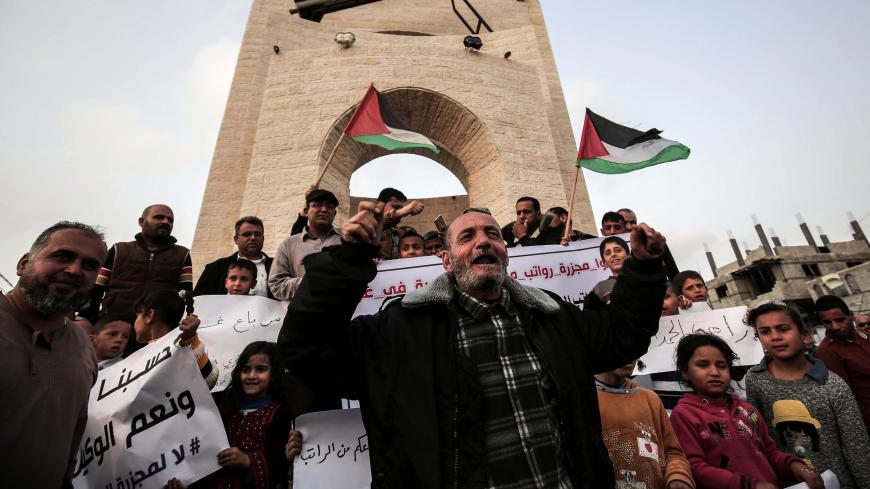 Palestinians in Gaza City take part in a budget protest of a decision by the West Bank-based Palestinian Authority to impose pay cuts on civil servants in the Gaza Strip, April 6, 2017. - SAID KHATIB/AFP/Getty Images

The budget was submitted to the government of national consensus and ratified Feb. 27, without being presented to the Palestinian Legislative Council (PLC) as required by law. The government merely presented the budget to a number of parliamentary bloc members, prompting PLC First Deputy Speaker Ahmed Bahar to denounce the process and assert that the budget is illegitimate. In a Feb. 28 news conference, he also called for the government to resign.

The Palestine News Agency, WAFA, reported that the Palestinian Council of Ministers stressed in its weekly meeting Feb. 27 that the first version of the budget has taken into consideration the status quo in the Gaza Strip. This would mean that not all of the expenditures are fully calculated yet. Under this scenario, the budget is estimated at $5 billion, including $3.8 billion in revenues, $775 million in foreign aid, $4.5 billion in current expenses and a funding gap of $498 million.

WAFA indicated that another version of the unified budget was also prepared to include the Gaza Strip in case reconciliation is achieved. That budget would amount to $5.8 billion, including $5.2 billion in current expenses, $4 billion in revenues, $775 million in foreign aid and an estimated budget gap of $1 billion. This means expenses would be 11% higher than revenues.

The Ministry of Finance in Ramallah didn't respond to Al-Monitor's request for comment on the budget.

Like Bahar, Yahya Moussa, a PLC member from the Change and Reform bloc, also told Al-Monitor the budget isn't legitimate, because it wasn't presented before the PLC, the legislative body authorized to review it before it is ratified. He also said tying funds to the reconciliation condition "is a clear and explicit message pointing to the government’s unwillingness to achieve reconciliation.”

The Palestinian split occurred in 2007 because of a conflict between the two main Palestinian political parties, Hamas and Fatah. Since then, until the government of national accord was formed and rapprochement supposedly was reached in October, Hamas administered the Gaza Strip while Abbas' Fatah party administers the West Bank.

Moussa said, “According to the law … the budget is only binding once the PLC approves it. The budget is then ratified by the president and the PLC follows up on the implementing process.” He added, “Yet the government of national consensus insisted on having the exclusive power of approving the budget, thus violating the provisions of the Palestinian Basic Law.”

Moussa considers the budget an illegal disbursement of public funds. He said the government's general conduct is unpatriotic and fails to properly take into account the reconciliation, as it doesn't espouse the logic of unity and distorts the budget structure, particularly since the largest share (27%) is allocated to security services.

Moussa further said it's unreasonable for the government of national consensus to collect a value-added tax on goods, foodstuffs, clothing, cars and fuel entering Gaza, in addition to income tax on the salaries of Gaza’s employees, and then spend the revenues elsewhere.

Mohamed Mekdad, the commerce faculty dean at the Islamic University in Gaza, told Al-Monitor the main problem in the public budget is that it maintains the status quo and excludes Gaza, contrary to what is expected, especially in light of the supposed reconciliation. Mekdad also believes that the omission clearly indicates there is no intention to achieve rapprochement or deal with Gaza as part of the nation and resolve its ever-increasing economic problems.

He stressed that taxes collected from Gaza are sufficient for its expenses, should they be spent in full, in addition to the reconstruction funds granted to the Gaza Strip. Nevertheless, he said, spending should be based on need, especially in light of the growing unemployment rate, recession and the weakness of the Gaza Strip’s private sector in creating new jobs.

Mekdad continued, “Initially, the public budget should take into account all parts of the state, without any exceptions or scenarios that exclude a particular area for political reasons. A government that represents the Palestinian people should have never accepted such a budget and involved the people in political bickering.”

He agreed with others who spoke with Al-Monitor that presenting the budget only to some parliamentary bloc members doesn't make it legitimate, since it was not presented to the PLC.

Mekdad added, “According to the budget, security and military expenditures outweigh those of the education and health sectors, which are the most vital — [showing] once again a major defect, because Palestine is a demilitarized state according to the Oslo Accords and does not need to spend money on the security sector.”

She added that the scenario of including Gaza on the condition of achieving reconciliation includes no details on how that would be funded, particularly since that version takes into consideration merging 20,000 Gaza Strip government employees with West Bank employees, without specifying any selection criteria. The Gaza government has 45,000 employees.

She noted, “Perhaps the government relied on the internal collection of taxes in Gaza, which Hamas is still in charge of.”

Transparency Palestine obtained a copy of the draft budget from private sources. Farraj said the draft is vague and doesn't indicate the disbursement priorities.

She explained that the government expected increased revenues based on tax amendments it adopted Feb. 19, but that won't be enough to bridge the gap. The government needs to develop a clearer and effective policy in the fight against tax evasion, she added.

The government needs to re-examine its expenditures in the security sector, review its revenue sources "and create a logical and equitable balance between vital and service sectors,” she concluded.

Many observers are left wondering whether it's even possible to adopt the second scenario, in light of the difficult economic conditions in the Gaza Strip, the UN's warnings about the deteriorating humanitarian situation and its demands that the government shoulder its responsibilities toward Gaza.